What Is Cross Addiction? 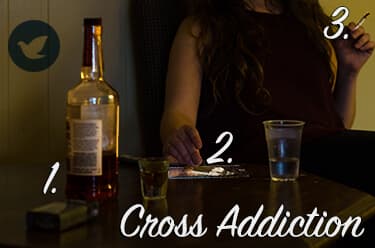 Cross addiction is a term used to describe a condition when two addictions occur in the same person. It occurs because a person who has one addiction is more likely to develop another addiction. It doesn’t always happen in the same fashion for every person though.

Another scenario is that a person undergoes treatment for quite some time and may still be attending Narcotics Anonymous meetings regularly. The person experiences a few bumps in the road of life, and they may start having a glass of wine each evening to cope with the stress. Over time, this drinking spirals, and they are now dealing with an alcohol abuse issue. Every time a new hurdle in life pops up, the person turns to the new substance to cope. While the person isn’t abusing narcotics anymore, they haven’t truly managed their issues with substance abuse.

Cross addiction doesn’t always consist of a person developing two different substance use disorders. In some cases, the person may have suffered from alcoholism and then developed a gambling or sex addiction. Eating disorders can be another form of addiction. Essentially, it is accepted that those who have suffered from one addiction or associated mental health disorder are more susceptible to the formation of other addictions or mental health issues.

How Common Are Cross Addictions?

While there aren’t specific statistics on rates of cross addiction, polysubstance abuse is common, as evidenced by the rates of those admitted to emergency departments under the influence of multiple substances. People often combine different substances to enhance the high or to counteract the negative effects of one substance, and this kind of continued polysubstance abuse can lead to cross addiction.

Addiction in general is a common occurrence in the United States. In fact, a survey conducted by the National Survey on Drug Use and Health (NSDUH) revealed that in 2014 alone, 21.5 million individuals in America aged 12 or older struggled with substance use disorder. The majority of these people struggled with alcohol abuse, and some struggled with the abuse of both drugs and alcohol.

Cross addiction is more common with individuals who are newer to recovery. During the vulnerable time of early recovery, it’s more likely that an individual will turn to another substance of abuse. According to some experts, up to 25 percent of those in recovery will begin abusing another substance.

Why Does Cross Addiction Occur? 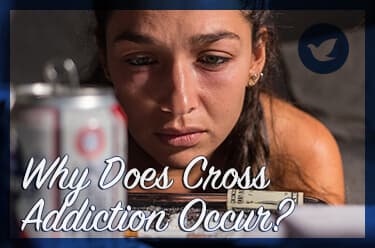 Sometimes, cross addiction can occur as a result of prescribed drugs. Generally, these drugs affect the part of the brain that regulates addictive behaviors and addiction in general. The dopamine receptors located in the brain aren’t able to distinguish between the substances. The brain releases a “feel good” chemical known as dopamine in response to anything that’s pleasurable. Those suffering from addiction begin to feel like they require that response, which is what provokes cravings, and these cravings prompt a person to relapse. People in recovery still desire that feeling. Basically, they want to achieve that high once again, and they might attempt this via another substance.

People who suffer from addiction to one substance may feel they can use another substance without issue. Since it’s not the original substance they were abusing, they may think they can use a new substance in moderation, and this is never the case; hence, cross addiction forms.

Psychiatrist Dr. Gregory Collins who heads the Alcohol & Drug Recovery Center at the Cleveland Clinic states that some people are more biologically programmed to develop addiction, making them more susceptible to develop a new addiction if they have already suffered from a prior one. Per Dr. Collins, a desire to minimize emotional discomfort is the root of addiction. Even if a person stops using one substance of abuse, if they don’t address the underlying issues, they are more likely to pick up another substance.

A team of researchers from the Columbia University Medical Center and the New York State Psychiatric Institute studied and compared data from the National Epidemiologic Survey on Alcohol and Related Conditions. Their findings were published in JAMA Psychiatry. The research was conducted on two groups of adults – one group of people who had substance use disorders and overcame them, and another group who had substance use disorders and didn’t overcome them. Three years after the initial study, researchers followed up with the individuals and discovered that those who overcame their original substance abuse habit were approximately 50 percent less likely to develop a new substance use disorder. Essentially, those who were able to maintain recovery were in a better position to avoid all substance abuse, including the formation of a new addiction.

Cross addiction is preventable. Those who already have a substance abuse problem should be cautious about taking prescription drugs that have a potential for abuse, such as stimulants, benzodiazepines and narcotic painkillers. They should inform their doctor of their addiction history, so alternative prescriptions can be given if appropriate.

A person with a previous history of substance abuse or another addiction should avoid mood-altering drugs altogether. If a person is unsure if a medication has mood-altering properties, they should inquire with either a pharmacist or the prescribing doctor.

Even if a person has never abused alcohol, those in recovery should avoid bars, clubs, and other social situations where there’s a strong temptation to drink. Recovery generally entails abstinence from all substances of abuse, not just the primary substance that one did abuse. For example, those in recovery from opioid addiction should avoid drinking since alcohol could be a new focus of abuse. Oftentimes, when a person begins using a new substance, it opens the door to relapse on the original substance of abuse as well.

How Are Cross Addictions Treated?

As with all addictions, treatment for cross addictions include medical detox and comprehensive therapy. It’s important that the underlying reasons behind the substance abuse, including the initial abuse, are effectively identified and addressed. If these root issues aren’t deal with, it’s likely that a new cross addiction will form at a later time.

Ready to get started?
We're available 24/7 to answer questions and help you make decisions about starting recovery from drug use.
Next Steps & ResourcesFind recovery resources and treatment info.