Everyone naturally experience highs and lows in life; however, those with bipolar disorder experience extreme ups and downs. These changes in mood happen frequently or without warning, and they can make life extremely difficult, both for the individual suffering from the disorder and for those around them.

Because of the severe shifts in mood and the associated disruptions to life, those struggling with bipolar disorder may turn to substance abuse in an effort to cope. Sometimes, this is referred to as “self-medication,” as the person attempts to modulate mood with substances of abuse.

What Is Bipolar Disorder?

Bipolar disorder is a mental health condition that causes changes in mood that are usually abrupt and without reason. The person may experience shifts in energy and activity level as well, and these symptoms affect how a person carries out everyday activities.

The cause of bipolar isn’t quite known. What is known is that certain factors may contribute to its development. These factors include the following:

Bipolar disorder comes in four varieties: bipolar I disorder, bipolar II disorder, cyclothymic disorder, and other specified and unspecified bipolar and related disorders. All of the forms of bipolar disorder cause obvious mood, energy, and activity level changes. The person will generally go through a manic phase, which is when the person has extremely “up” moods, feeling elated and full of energy. The “down” phase occurs when the individual feels depressed, hopeless, or extremely sad.

For people who have bipolar I disorder, manic episodes lasts at least seven days. In some cases, the manic phase is so severe the person requires hospitalization. Depressive episodes usually last up to two weeks. It’s possible for the person to have periods where they experience both mania and depression.

People who have bipolar II disorder have depressive episodes followed by hypomanic episodes, but during the hypomanic phase, they doesn’t require hospitalization. Individuals with cyclothymic disorder have numerous periods of hypomanic symptoms as well as periods of depression, and symptoms must have been present for at least two years in adults and one year in children. Those who have other specified or unspecified bipolar and related disorders experience extreme mood changes, but they don’t meet the requirements listed above for other bipolar-related diagnoses.

What Are the Signs of Bipolar Disorder?

The symptoms of bipolar disorder vary based on the phase the person is in. When people go through the manic phase, they experience various symptoms, such as:

During the depressive phase, the person may experience:

How Common Is Bipolar Disorder and Substance Abuse?

In the US alone, about 5.7 million adults are affected by bipolar depression each year, as noted by the Depression and Bipolar Support Alliance. This is equivalent to 2.6 percent of the population. Many of these individuals suffer from a substance abuse issue in addition to bipolar disorder.

Per the National Institute on Drug Abuse, in 2013, 24.6 million Americans ages 12 and older had abused illicit drugs in the past month. According to the Substance Abuse and Mental Health Services Administration’s National Survey on Drug Use and Health, among individuals ages 12 and older, 23.5 million required treatment for an illicit drug or alcohol problem in 2009. In 2013, 22.7 percent of individuals between the ages of 12 and 20 used alcohol. The National Council on Alcoholism and Drug Dependence reports that one in every 12 adults in the US, which is equivalent to 17.6 million people, suffers from alcohol dependence or abuses alcohol. 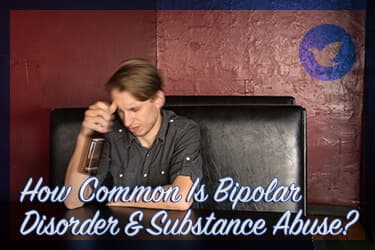 Alcohol is the most commonly abused substance among people who have bipolar disorder. In fact, a national study published in the American Journal of Managed Care indicated that 46 percent of individuals who had bipolar disorder abused alcohol or had an alcohol addiction. Of the individuals who participated in the study, 41 percent abused drugs or had a drug addiction.

The Journal of Bipolar Disorder reports that males have higher rates of co-occurring bipolar disorder and substance abuse. The study cited was conducted on 392 patients who were hospitalized for manic or mixed episodes of bipolar disorder. Of these individuals, 48.5 percent abused alcohol in their lifetime while 43.9 percent abused drugs. Close to 60 percent of the participants had a history of substance abuse at some point in their life. The study didn’t show a difference in the rate of substance abuse between manic and mixed bipolar patients, but it did show those with bipolar disorder who abused substances had an increased number of psychiatric hospitalizations.

What’s the Connection between Bipolar Disorder and Substance Abuse? 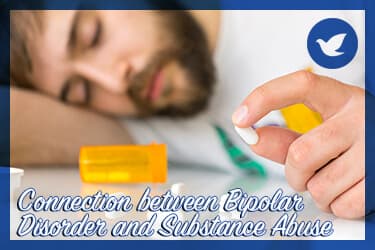 Research suggests the brain’s chemistry plays a role in the onset of bipolar disorder and substance abuse. People with bipolar disorder have abnormal levels of norepinephrine, dopamine, and serotonin. These three neurotransmitters affect mood, emotion, metabolism, sleep, appetite, and stress response. Additionally, they affect emotions and mood. When a person uses drugs or alcohol heavily, it interferes with these same neurotransmitters, which can lead to erratic energy levels, depression, and instability. Since drugs and alcohol affect the same chemicals in the brain that the disorder does, they are commonly used to combat symptoms; however, they often exacerbate symptoms in the long run.

Mood disorders may arise as a result of changes to brain chemistry when taking drugs or abusing alcohol. The highs and resulting “crashes” of certain substances mimic the effects of some mood disorders, so a person should inform their doctor of previous substance abuse and the onset of mood swings to receive the most accurate diagnosis.

Co-occurring disorders require specialized treatment. It’s not enough to simply treat substance abuse on its own or the mental health issue without addressing the substance abuse. Both disorders must be treated simultaneously in order to ensure the best chances of complete recovery. If only one disorder is treated, relapse to both conditions is likely.

Accurate diagnosis of both conditions is vital. When a person enters treatment for a substance use disorder or mental health issue, they should undergo a complete assessment where other co-occurring disorders may be identified and properly diagnosed. With the appropriate diagnoses in hand, treatment professionals can design a care plan that adequately addresses all co-occurring issues.

Oftentimes, those with bipolar disorder are prescribed medications to ease the symptoms of the disorder. Medications commonly prescribed include:

Depending on the substance use disorder in question, medications may also be used during the withdrawal and maintenance process. Though medication is critical in many cases, it is not enough on its own. It should be used in conjunction with long-term therapy to address all issues related to both disorders.

bipolarco-occurring disorders
Ready to get started?
We're available 24/7 to answer questions and help you make decisions about starting recovery from drug use.
Are you covered for addiction treatment? Find your insurance.
and many more...
✕
Instantly Check Your Insurance Coverage
Your information is safe & secure
At Recovery First, we accept most types of private (non-government) insurance and offer a variety of payment options.
You can quickly and privately check your insurance benefits to see if you're covered for addiction treatment services. We’ll be able to tell you if your provider is in network with Recovery First Treatment Center and all American Addiction Centers locations.
This means your treatment may be FREE1 depending on your policy, copay, and deductible.
Next Steps & ResourcesFind recovery resources and treatment info.