Written by: Laura Close
Reviewed by: Ryan Kelley, NREMT
Updated: Jun 18, 2021
Heroin is an opioid drug that’s made from opium poppy plants and morphine, a natural substance from the poppy seed pod. It is an illegal substance that has no approved use in medical settings. Heroin can be taken in a variety of ways: by snorting, sniffing, injecting, or smoking it.
Did you know most health insurance plans cover addiction treatment?

The National Survey on Drug Use and Health, an annual national survey, estimates that in 2018, around 808,000 people aged 12 and older used heroin in the past year.  An estimated 506,000 people misused heroin as well as prescription opioid pain relievers.1

Addiction is a treatable, chronic medical disease marked by the compulsive use of heroin and/or other substances despite negative consequences in a person’s relationships, career, and other aspects of their life.2 Aside from the risk of addiction, heroin use can alter how the brain works3 and have other long-term health consequences.

Heroin is often cut with other powder-like substances such as powdered milk, sugar, or even with cheaper and more powerful synthetic opioids similar to fentanyl,4 which increases the risk of a deadly overdose.5

Evidence-based treatment, both pharmacological and behavioral, based on years of research and treatment experience make it possible to recover from heroin addiction and lead a sober life. Detoxification, treatment, and a life free from the grip of heroin are all within reach.

What is Heroin Use Disorder?

When a person takes heroin, either by injecting, sniffing, snorting, or smoking, it attaches to opioid receptors in the brain that are involved in feelings of pleasure and pain. The more a person uses heroin, the bigger the chance is that they develop a tolerance of the substance. This means that they’ll continue to need more heroin to get the same high they had before.3

When a substance like heroin—and the compulsive use of the drug—interferes with a person’s day-to-day life or creates health issues, an individual may be diagnosed with a substance use disorder.3

For a medical or clinical professional to diagnose a heroin use disorder, a person must exhibit at least 2 of the following signs of heroin addiction in a 12-month period:6

Signs of Heroin Use

While the diagnosis of an opioid use disorder should only be made by medical or clinical professionals, there are signs suggestive of heroin addiction or abuse that someone like a family member or friend might identify. 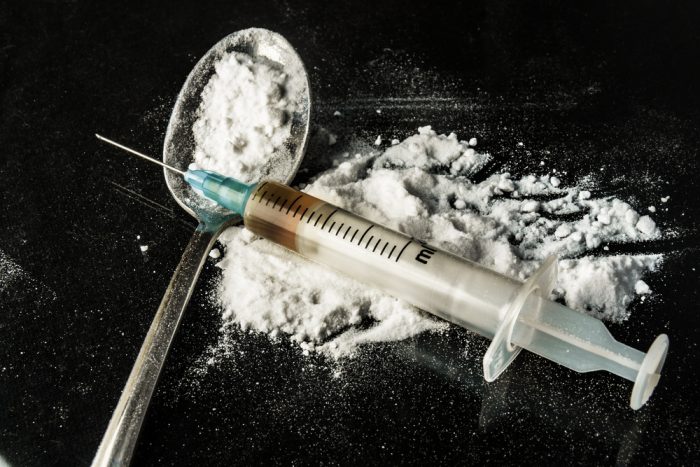 The signs suggestive of heroin use include:7

Some of the common health risks of abusing heroin can include:3

When someone abuses heroin over the long-term, other health risks might present, including:3, 8

Because heroin is an illicit substance and is not regulated, it often gets cut with other additives like powdered milk or sugar. When used intravenously, heroin with these additives may clog a person’s blood vessels and lead to further health complications that can cause permanent damage to the lungs, liver, kidneys, or brain.3

Those who inject heroin might also experience skin abscesses or boils, collapsed veins, an infection of the heart lining and valves, viruses like HIV or Hepatitis C from sharing needles.

Those who consume the substance nasally (i.e., “snorting”) might have damaged tissue in the nose which may even perforate the separation between the nostrils.

Mental health disorders such as depression may develop or worsen, and men may experience sexual disfunction while women might have irregular menstrual cycles.

When a person enters an addiction treatment program to curb their heroin use, the likely first step will be detoxification, including medical management of uncomfortable, moderate to severe withdrawal symptoms.

Doctors may prescribe medication to help manage cravings and alleviate or stave off withdrawal symptoms, including:9

Naltrexone, which helps stop opioid drugs like heroin from attaching to the opioid receptors in the brain, is also sometimes prescribed to suppress heroin cravings, but it can’t be used until a person completed withdrawal.3

A qualified physician can dispense buprenorphine after an in-person physical examination and assessment at a doctor’s office without requiring attendance to a treatment facility.10 During COVID-19, the in-person requirement is waived and the assessment may be done via telemedicine.12

For many though, a heroin addiction treatment center has the tools a person will need to for more effective treatment leading to long-term recovery. Inpatient programs offer a sober environment where doctors and behavioral health professionals can monitor the patient, and the patient can relearn how to live life without heroin.3

Inpatient or intensive outpatient programs offer group or one-on-one cognitive behavioral therapy (CBT). CBT can help a patient shift the way they think about heroin and themselves, as well as teach ways to avoid relapse by managing stress and triggers that may make them want to start using again.3

Recovery First Treatment Center offers safe medical detox from heroin and a number of other substances, as well as a full continuum of care for treatment of substance use disorders. From intensive medical rehab to telehealth addiction treatment, Recovery First can provide you with the medically validated help you need to reach sobriety and recovery. Call to talk to one of our compassionate, knowledgeable Admissions Navigators today. You can even see if your health insurance would cover treatment below.

How do people take heroin?

In a study looking at heroin use between 2002-2013, 96% of past-year heroin users reported use of at least one other drug during the past year, and 61% reported using at least three different drugs.14

Why is heroin addictive?

Heroin binds to the opioid receptors in the brain, which regulate feelings of pain and pleasure. Taking heroin provides users with a “rush,” or surge of euphoria. As someone continues to take heroin, they may need to consume more of the substance to get the same feeling (i.e., tolerance) or experience withdrawal symptoms when they reduce their use or stop taking heroin altogether (i.e., dependence). Tolerance and dependence greatly increase the risk of addiction.3

Can you overdose on heroin?

Yes. If a person takes too much heroin, their breathing can slow or stop. Short and long-term effects can occur if the amount of oxygen decreases to the brain. Among the worst outcomes are coma, permanent brain damage, and death.3 In 2018, nearly 15,000 people died from a drug overdose involving heroin, that’s 5 deaths for every 100,000 people in the U.S.15

Naloxone can be used to treat an opioid overdose.3

What are heroin withdrawal symptoms?

If someone who has been using heroin regularly stops taking the substance abruptly or reduces their use, they may experience mild to severe withdrawal symptoms. These can include:3

Attending detox for the cessation of heroin means the patient could have help managing their uncomfortable withdrawal symptoms.