Written by: Laura Close
Reviewed by: Ryan Kelley, NREMT
Updated: May 19, 2021
Kratom is a drug with both stimulant and sedative effects, derived from a tropical tree that grows in Southeast Asia. The plant is related to the coffee plant, and kratom leaves produce an unusual combination of stimulant- and opioid-like effects.1
Did you know most health insurance plans cover addiction treatment?

The psychotropic substance is legal in the U.S., although several states and municipalities have banned the substance.2 I Kratom is not approved for medical use by the Food and Drug Administration (FDA) and the FDA has issued several alerts warning consumers against its use.3

The latest FDA alert says that using Kratom may “expose users to the risks of addiction, abuse, and dependence.”4 The Drug Enforcement Agency also lists it a drug of concern, but it is not a controlled substance.3

According to the 2019 National Survey of Drug Use and Health, about 825,000 Americans aged 12 or older (0.3%) used kratom in the last month.5 It’s sold as a supplement or tea and is often taken for pain management and also as an at-home detox for opioid abuse.1, 6 However, there is currently little research that proves it’s effective for this use. Kratom is, however, known to be abused and potentially may cause addiction and carry other health risks.7

How Does Kratom Work?

There are two basic compounds in kratom, mitragynine and 7-hydroxymitragynine, that interact with opioid receptors and other mechanisms in the brain to produce a pleasurable sedative-like effect and decrease pain. These compounds act on additional parts of the brain at low doses to create a stimulant-like effect.1, 8

Medical or clinical professionals can diagnose a substance use disorder that involves kratom abuse using the criteria from the Diagnostic and Statistical Manual of Mental Disorders, 5th Edition. The user would demonstrate 2 or more criteria over a year period. These criteria include:10

People who use low-dose kratom from its stimulant effects report feeling more social and alert and having higher energy levels. At higher doses, Kratom produces effects similar to opioid drugs, including respiratory depression, sedation, and constipation.1, 8

The drug’s popularity in the West appears largely due recreational use, self-management of pain, and to help self-manage opioid withdrawal symptoms.6

Kratom for opiate withdrawal is not an appropriate or proven method of detox. There is no research to support this notion, and it should not be used as a substitute for a rehabilitation program and detox with an overseeing medical professional.1, 9

The Health Risks of Kratom Abuse

Physical side effects users of kratom could experience include:6

There are some dangers associated with using kratom for a long time, including liver damage, although these effects appear to be rare. Extreme cases of kratom addiction may produce hallucinations, confusion, and delirium, but these cases are also rare.6

The stimulant effects of kratom include:11

Sedative effects are very similar to the effects from opioids like oxycodone or heroin, with euphoric effects that generally tend to be less intense than an opioid medication. The effects of kratom begin around 10 minutes after consumption, and typically last for about 1 hour12 but they can last up to six hours.11

Kratom’s mild stimulant and opioid-like properties, may be less addictive than classical opioids, however, it there are numerous reports indicating that it may be highly addictive.11

Kratom overdose appears much like other opioid overdoses, and evidence suggests the reversal agent naloxone may temporarily reverse symptoms so the individual can get medical attention.13

Anxiety and depression were also common psychiatric symptoms that were reported during kratom withdrawal.8 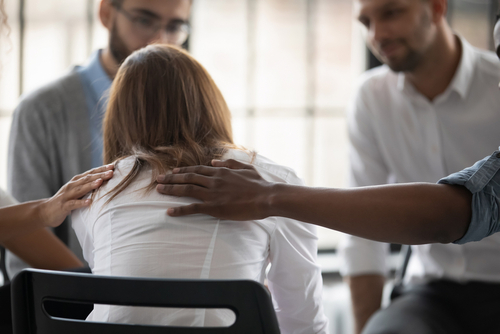 Those struggling with heroin abuse may turn to kratom to stave off withdrawal symptoms. Although it may be tempting to use kratom to self-manage or self-detox, further studies are need to clarify the efficacy and safety prior to use.6

Drug rehabilitation programs are the best course for people who struggle with addiction to any substance or behavior, including kratom.

Although kratom is technically legal in many areas of the United States, it is not safe, and it can lead to problems for people who use it. Individual therapy is the backbone of most treatment programs, addressing the underlying reasons that led to kratom abuse in the first place.

Rehabilitation programs also offer social support in the form of group therapy and activities. These programs, like Recovery First Treatment Center’s, are vitally important because they help clients to build a support system and firm foundation in recovery. Give us a call at to learn more.