Edited by: Laura Close
Updated: Nov 10, 2022
Service members in the U.S. Armed Forces sacrifice a lot to serve their country. Sometimes, those sacrifices leave them with mental health disorders like alcohol or drug use disorder. Post-traumatic stress disorder (PTSD), physical pain, and traumatic brain injury (TBI) from theaters of war can contribute to high stress. This stress can increase the use of drugs or alcohol among military Veterans.1
Addiction Among Service Members

Addiction is a chronic brain disease involving compulsive drug-seeking and drug-consuming behaviors despite the harmful physical, emotional, and social consequences.2

Veterans and current service members smoke and misuse other drugs at higher rates than civilians, largely due to more intense career stresses. These stresses can also contribute other mental disorders such as post-traumatic stress disorder (PTSD), depression, and anxiety.1 When diagnosed in the same person, multiple mental disorders are called co-existing disorders.

Our page on treatment for Veterans with PTSD provides information on the different approaches to treating this mental health disorder.

As of a 2017 study, more than 1 in 10 Veterans have been diagnosed with a substance use disorder.5 A few substances military Veterans commonly misuse are below.

Although strict policies are in place for active-duty military members, the National Institute on Drug Abuse found that:5

In all 4 branches of the military—Navy, Marines, Army, and Air Force—heavy drinking among men is 4 times that of women.6

Like stated above, being in combat, witnessing death, or other traumatic events may lead to higher rates of alcohol use among military Veterans.7

Recovery First’s Veterans and alcohol use page provides an in-depth look at why this population may misuse it and options for treatment.

The goal of opioids, when used as prescribed, is relief from pain. This is a big deal among service members, who can suffer from chronic pain from heavy gear or injuries from war zones. Opioids are very addictive: Even when used correctly according to a doctor’s prescription, opioids can be become addictive.

The number of prescriptions military doctors wrote for opioids quadrupled between 2001 and 2009, the onset of the Iraq and Afghanistan wars.8 The opioids that the U.S. Department of Veteran Affairs most often prescribes include:8

It may not be a surprise that older Veterans as a whole suffer more from chronic pain. However, younger Veterans are the most at risk to develop an opioid use disorder. In just 4 years, between 2003 and 2007, opioid misuse among young Veterans rose from 3% to 4.5%.8

Learn more about why Veterans may develop opioid use disorder.

As of 2008, about 30% of U.S. Armed Forces members were cigarette smokers.5 Another survey of over 48,000 service members found that deployment was a major risk factor determining if former smokers might start smoking again.1

One study revealed that among deployed troops who smoked cigarettes:1

Of the Veterans who had used VA health services in 2011, 15% were diagnosed as physically dependent on nicotine.9

Our page on Veterans and cigarette use has more in-depth information.

Military Veterans are at a high risk for co-occurring disorders—also known as dual diagnosis or comorbidity. Post-traumatic stress disorder is a leading mental disorder that also co-occurs with a number of substance use disorders among service members.

Nearly 30% of Veterans returning from the Iraq and Afghanistan wars report PTSD symptoms.10 Between 11 and 20% of service members returning from deployment struggle with PTSD and depression; these two disorders often occur together for Veterans.11

The combination of PTSD and substance use disorder in Veterans can be particularly dangerous. Using drugs or alcohol is known to increase symptoms associated with mental health conditions, like depression, anxiety, bipolar disorder, and PTSD. It is also associated with increased risk of suicidal thoughts, suicide attempts, and death by suicide.

Homelessness in the Veteran Population

At the beginning of 2019, more than 37,000 Veterans in the U.S. were experiencing homelessness.13 Research has found that, unfortunately, Veterans are at greater risk of homeless than their non-Veteran counterparts.

Because both substance use and mental illness are both risk factors for homelessness, treatment for addiction and co-occurring disorders is vital for Veterans who are struggling. 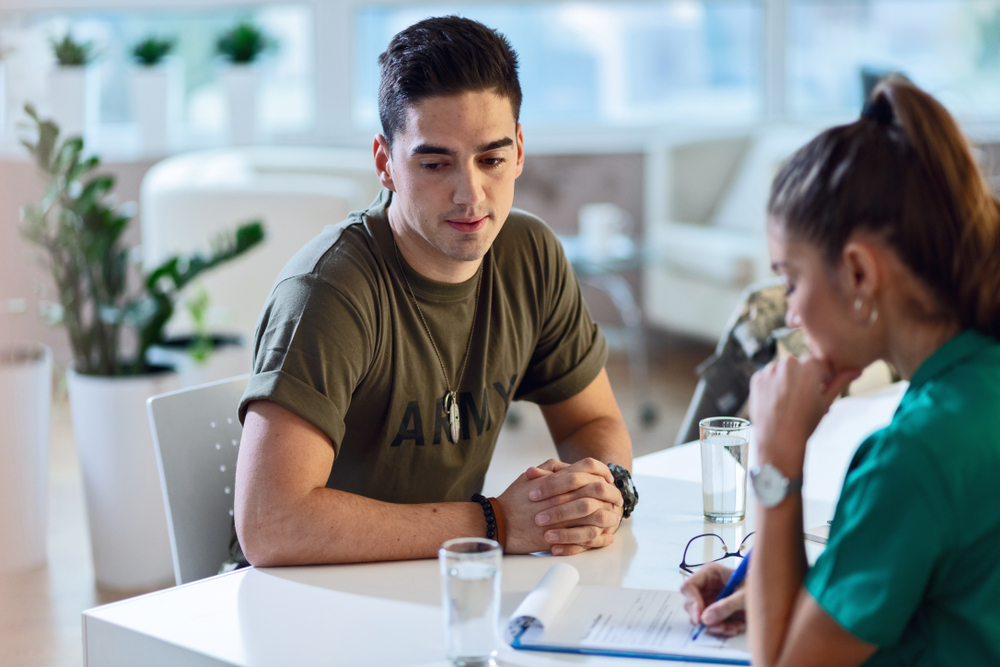 Veterans seeking treatment from the U.S. Department of Veterans Affairs (VA) for substance use disorder are screened for PTSD, traumatic brain injury, depression, and suicidal thoughts.11

The risk of these co-occurring with substance misuse is extremely high among Veterans in particular.

As with other approaches to co-occurring disorders, evidence-based psychotherapy is the foundation of treatment. Cognitive behavioral therapy (CBT) and specific, trauma-focused counseling approaches can help Veterans with PTSD or depression understand these issues as triggers for their substance misuse problems and learn better ways to cope with stress that do not involve drugs or alcohol.11

The VA offers several different resources for Veterans struggling with mental health disorders, including a:

Not all Veterans want to use the VA for addiction treatment, or they may not have easy access to their nearest VA hospital. In this case, a Veteran’s benefits may provide some options outside the VA system.

Recovery First has a dedicated Veterans’ program for military service members suffering from a substance use disorder or co-occurring disorders.

At our substance use treatment facility in South Florida, we offer multiple levels of care that incorporate evidence-based treatment, including:

How to Afford Treatment as a Veteran

Recovery First accepts a variety of payment methods, including most types of private insurance. All of the American Addiction Centers facilities are proud to be community care providers. You may be eligible to receive treatment at our addiction treatment centers using your benefits.

Other ways to pay for rehab such as financing are also available. To verify your insurance or benefits coverage at Recovery First, complete the confidential . We’ll respond promptly with your coverage details.

It is not always possible for Veterans to get the help they need through the VA. For example, wait times may be too long or you may live in a location that is too far from a full-service VA facility. In situations such as these, you may qualify to receive care from an outside community care provider. 15

Recovery First is an approved Veterans’ substance use treatment provider in the VA’s community care network, which means that if you are eligible and approved to receive community care, you may be able to get that care with us.

In most cases, you must receive prior approval from the VA to avoid being billed for the care you receive.15 For more questions about how Recovery First provides Veterans’ substance use disorder programs as a community care provider, please call us at .

Get the Info & Help You NeedLearn about the options available at our South Florida addiction treatment center.