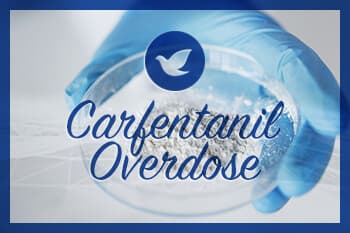 The drug was first developed in 1974 and marketed under the name Wildnil. It served as an opioid analgesic for large animals such as elephants. Obviously, it was not meant for human consumption, but there has been a rise in human use of the drug recently. The extreme potency of carfentanil makes it hazardous for humans to ingest, according to the U.S. National Library of Medicine.

A recent trend has seen carfentanil being added to mixtures of heroin and other illicit drugs, according to the National Institute on Drug Abuse (NIDA). The DEA went so far as to issues warnings in multiple states about this trend in 2016 and eventually issued a nationwide warning regarding the substance.

The potential for overdose is extremely high in the case of carfentanil. While it yields effects similar to those of other opioids, its increased potency will result in more extreme consequences. It is known for its strong sedation effects, as its use as a tranquilizer for large animals would suggest.

Carfentanil overdose can be fatal, so recognizing the symptoms of an overdose can be crucial to the survival of the user. The most common symptoms are referred to as the opioid overdose triad, according to the World Health Organization (WHO). They are:

Carfentanil and other opioids are responsible for a high number of overdose deaths in the United States every year, mostly due to the effects they can have on the respiratory system. Respiratory depression can often lead to death if untreated and sometimes results in death even with treatment.

Response to an Overdose

A timely response to a suspected overdose can mean the difference between life and death. If one suspects an overdose involving carfentanil or any other opioids, it is paramount that they call 911 immediately.

Providing medical professionals with as much information as possible can be extremely helpful in dealing with the situation. Relaying the person’s gender, age, and weight over the phone can assist the response team. Giving details about the drugs used, as in the specific substance, when it was taken, and how much was consumed, can also be very useful information for the professionals arriving on the scene.

Due to the effects of opioids on the respiratory system, overdose can lead an individual to stop breathing. In this case, a trained individual should begin CPR, according to the Substance Abuse and Mental Health Services Administration (SAMHSA).

The effects of an overdose may be reversible via the use of naloxone. Naloxone is a medication that was specifically designed to quickly reverse the effects of opioids in the event of an overdose. Medical professionals will often administer this medication via injection, but auto-injectors were recently approved for public use. If one has access to an auto-injector, it should be used on the outer thigh of the individual suffering from an overdose.

There are training programs for non-professionals regarding the administration of naloxone, and this can be especially useful for those close to a person struggling with opioid abuse. National opioid prevention programs have been distributing naloxone, and WHO estimates that there are about 50,000 kits around the country now. Naloxone can also be obtained at pharmacies with a prescription from a physician; in some cases, it is even available without a prescription.

Preventing an overdose is obviously preferable to treating one that has occurred. Avoiding a substance as strong as carfentanil completely is certainly advisable, as it is not meant for human consumption. If it can have sedating effects on animals as large as elephants, it’s clearly dangerous for a human to ingest. Due to carfentanil being mixed into batches of heroin though, an individual may not always know they have been exposed to the drug. This makes it extremely dangerous. Avoiding illicit opioids entirely can prevent this situation from arising.