Unfortunately, opioid dependence and overdose are serious problems in the United States. Between 2019 and 2020, the numbers of total overdose deaths increased by 17%, and deaths attributed to opioid drugs increased by an alarming 42%.1

In Florida, there are 15.8 opioid overdoses for every 100,000 people, a rate higher than many other states.2 To curb the tide of opioid-related deaths across the state, naloxone is becoming increasingly available. We’ll show you how to find it and discuss how to use it effectively to help prevent a person from dying after experiencing an opioid overdose.

Naloxone Basics: What Is Narcan?

Naloxone is an opioid antagonist medication that can displace opioids from the body’s opioid receptors and reverse the effects of a painkiller or heroin overdose. An overdosing person who is given naloxone may begin breathing normally again after experiencing life-threatening respiratory depression.

Naloxone comes in several forms including a nasal spray, branded as Narcan,  and a now discontinued autoinjector, Evzio, which is still available while supplies last and may be used until its expiration date.3,4 Naloxone is also available in kits for injection into the thigh, butt, or arm, as well as in kits that allow for the assembly of a nasal spray using a specific type of syringe and mucosal atomizer. Both the injection and intranasal atomizer kits are more complicated to use in an emergency when every second counts, so often it is the one-step Narcan nasal spray which is the preferred method for friends and families of opioid users looking to keep naloxone with them in case of overdose.3

Where to Find Narcan (Naloxone) in South Florida 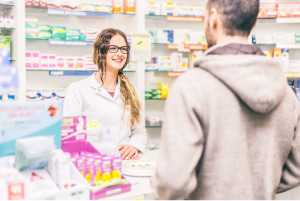 Naloxone is available in Florida without a prescription and is sold at CVS, Walgreens and other pharmacies throughout South Florida. While naloxone is a prescription medication, Florida has a standing order that allows pharmacists to legally distribute naloxone to individuals who request it without having a prescription, making it akin to an over-the-counter medication.

You can also search the website I Save Florida to find locations near Hollywood that distribute naloxone.

When to Use Naloxone

Naloxone is given when it is suspected that someone has overdosed on opioids. If you think someone has suffered an opioid overdose but you’re not 100% sure, it is still okay to give naloxone. The medication will have no effect on someone who has not used opioids.3

If you’re unsure of whether someone is overdosing on opioids, look for the 3 classic signs of an opioid overdose, called the “opioid overdose triad”:

Other signs that someone may be suffering an opioid overdose include:5

Could My Loved One Overdose?

Anyone who uses illicit or prescription opioids is at risk of overdose; however, the following factors may put someone in even greater danger of overdosing:6

Having a doctor’s prescription for an opioid doesn’t remove a person’s risk for overdosing. In fact, opioid pain medications are sufficiently dangerous that some states—including Florida—have begun mandating that naloxone be co-prescribed with certain opioid medications. In Florida, pain patients with a severe traumatic injury who are prescribed a Schedule II opioid such as oxycodone (OxyContin) or hydrocodone (Vicodin) must be prescribed naloxone along with the painkiller.8

Florida Narcan Law: Can I Be Arrested for Drugs if I Call 911?

If you are intoxicated and/or in possession of illegal drugs, it can be scary to call 911 for yourself or for someone else. Hesitation or refusal to call 911, however, can result in needless deaths. To reduce the numbers of opioid overdose deaths in Florida, state legislators enacted the 911 Good Samaritan Act (F.S.S. 893.21) in 2012.9,10

Under this Good Samaritan immunity law, if you seek help for an overdosing person (including yourself) and you do so “in good faith,” you cannot be arrested or prosecuted for possessing a controlled substance or drug paraphernalia if the discovery of the substance was made as a result of you seeking help. If someone seeks help for you, you are afforded the same legal protections.9,10

You are also protected from penalties for violation of a condition of pretrial release, probation, or parole if the evidence for the violation was discovered as a result of the request for medical assistance.10

How to Use Narcan

Detailed instructions explain how to use Narcan, but in general, the nasal spray is used in one nostril while the person is lying on their back.3 The spray dispenses a single, prefilled dose of naloxone.3  Often, a naloxone kit comes with two doses of medication in case a person’s breathing isn’t restored after the first dose and he or she requires a second dose before emergency responders arrive on scene.11 With the increasing potency of illicit opioids due to the rise of fentanyl and fentanyl analogs that often show up in heroin and illegally obtained street drugs, it is increasingly possible a person will need more than one dose of Narcan to begin breathing adequately.3

The steps for responding to an opioid overdose with Narcan (or another form of naloxone) are as follows:5,12

Stats on Overdoses in Florida

Overdoses rose significantly between 2019 and 2020. Many of these overdose deaths in Florida are attributed to fentanyl, which caused 5,302 deaths in 2020. Cocaine and alcohol were the next most common causes of drug overdose deaths that year.1

Misuse of prescription drugs is also a major concern for Floridians. In 2020, more than 9k people who died in Florida had at least one prescription drug in their body at the time of death.1

Prescription drugs (e.g., opioids, benzodiazepines, and sleeping pills such as Ambien) cause more overdose deaths in Florida than illicit drugs.1Counterfeit prescription pills may also be adulterated with any number of illicit drugs, including fentanyl and meth.

The dangers of drug use are not limited to overdose. For example, drug users are at high risk for infection by bloodborne diseases such HIV or hepatitis C, especially if they inject drugs. In Broward County, more than 1,800 cases of hepatitis C were reported in 2018 alone, and more than 21,000 Broward County residents are living with HIV.13

Harm reduction measures are created with the knowledge that societal abstinence from all drugs is not an attainable goal and instead seeks to reduce the harm associated with drug use.14,15 This view and subsequent harm reduction efforts are controversial. They are often mistakenly viewed as promoting drug use; however, harm reduction programs such as needle exchanges have been shown to be effective in:15

Hollywood, Florida residents may access the following harm reduction resources to mitigate some of the dangers associated with opioid abuse:

heroinnarcanOpioidsoverdosePrescription drug abusePrescription Opioids
Prefer getting help via text?
We're available 24/7 via text message. Signup below for access to our team when its convenient for you!
and many more...
Ready for Recovery?See what brings people to Recovery First for help.