The Difference between Vicodin and Percocet

Vicodin is a combination of hydrocodone (an opioid painkiller) and acetaminophen. The average dose of Vicodin in oral tablet form contains 500 mg of acetaminophen and 5 mg of hydrocodone. This drug has been the most prescribed medication in the United States since 2007, per Forbes,and more than 135 million prescriptions were filled for it in 2012 alone.

Much like Vicodin, Percocet contains an opioid pain reliever (oxycodone) and acetaminophen. The oral administration form of this drug is composed of 325 mg of acetaminophen and 2.5 mg of oxycodone. This drug is often used to treat pain for chronic conditions, such as pain experienced by cancer patients going through chemotherapy.

What’s the Difference Between Opioids?

The biggest difference between the opioid ingredients in these two drugs, hydrocodone and oxycodone, is strength. Oxycodone is considered to be more potent than hydrocodone. Thus, Percocet is stronger than Vicodin.

Both of these drugs have restrictions on them. The Food and Drug Administration issued a warning in early 2016 urging physicians to scale back their prescribing practices when it comes to narcotic pain relievers like Vicodin and Percocet for patients with complaints of chronic pain. Another change to prescribing practices back in 2014 limited physicians’ abilities to authorize refills for prescriptions containing hydrocodone.

Who Uses These Drugs? 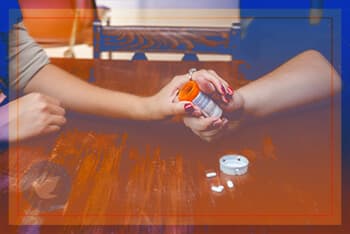 These drugs have both been widely abused and trafficking throughout the country for many years. In many cases, individuals who abuse opioid pain relievers do so with a legal prescription in hand. The National Institute on Drug Abuse notes 18.1 percent of people who abused drugs like Vicodin and Percocet in 2014 did so with a prescription for them from a doctor.

The abuse of prescription opioids like Vicodin and Percocet has grown in popularity across all demographics. As a result, people from all walks of life and all racial and socioeconomic backgrounds are suffering from the side effects of opioid abuse. According to The New York Times, these drugs claim the lives of roughly 44 people every day in America due to overdose.

What Are the Risks of Vicodin and Percocet Abuse?

The risks associated with abuse of both of these drugs are similar. Neither is necessarily worse than the other. However, overdose is more common when stronger drugs are being abused, so it may be more likely to occur in cases of Percocet abuse. That being said, overdose is a real concern with both Percocet and Vicodin. There was a 14 percent increase in the number of opioid-related drug overdoses between 2013 and 2014, per the Centers for Disease Control and Prevention.

In addition, acetaminophen brings with it serious risks. Contrary to popular belief, this purportedly safe over-the-counter medication is responsible for more than 150 deaths each year, Mercola reports. Complications that can stem from the abuse of acetaminophen include:

While there are differences between Percocet and Vicodin, abuse of either of these drugs can result in long-term health and life consequences. It’s important to seek professional help as soon as possible if you suspect you are addicted to either drug. Medical detox is needed to safely go through opioid withdrawal, and detox should be followed with comprehensive addiction treatment to ensure the best chances of a complete recovery and a healthy future.

Recovery First, one of American Addiction Centers’ Florida opioid treatment facilities, is ready to help you overcome addiction and find long-term recovery. Call us today at to learn more about addiction treatment near you.

opiateprescriptionvicodin
Prefer getting help via text?
We're available 24/7 via text message. Signup below for access to our team when its convenient for you!
and many more...
✕
Instantly Check Your Insurance Coverage
Your information is safe & secure
At Recovery First, we accept most types of private (non-government) insurance and offer a variety of payment options.
You can quickly and privately check your insurance benefits to see if you're covered for addiction treatment services. We’ll be able to tell you if your provider is in network with Recovery First Treatment Center and all American Addiction Centers locations.
This means your treatment may be FREE1 depending on your policy, copay, and deductible.
Next Steps & ResourcesBrowse helpful articles and find treatment options.