How Does Naloxone Work?

Naloxone is a drug that temporarily counteracts opioid overdose. It has been in use among medical professionals since the 1970s, but it has recently been approved in new forms such as nasal sprays, making the drug easy to administer for those without medical training. Several lawmakers and physicians all over the globe believe that wider distribution of naloxone will help to prevent thousands of overdose deaths worldwide every year.

The medication has also been added to some medication-assisted therapies to end opioid dependence, such as combining naloxone and buprenorphine to create Suboxone. The addition of naloxone is intended to reduce the potential for a person to tamper with the drug and get high from buprenorphine. Naloxone only works to temporarily prevent opioid drugs from binding to the brain, so if a person uses narcotics in combination with other drugs, such as alcohol or benzodiazepines, the overdose will be more difficult to reverse. 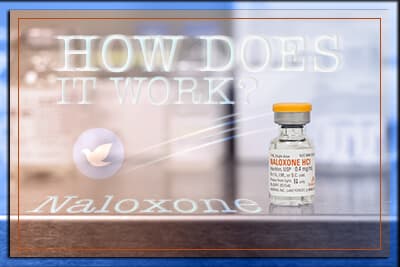 Although naloxone has been hailed by many people as a way to stem the tide of the opioid addiction epidemic, it is not recommended as the only treatment for a person suffering an opioid overdose. Instead, emergency services should be called, then naloxone should be administered, so the person suffering the overdose can survive until emergency medical personnel arrive. Naloxone has a very short half-life, so it will not permanently stop an opioid overdose. Hence, further medical care is required.

Naloxone binds to opioid receptors in the brain in place of opioid drugs. When opioids are prevented from binding to these receptors, the brain does not flood with dopamine due to the intoxicating substance. Although naloxone can have some side effects, it does not induce any euphoria when bound to opioid receptors in the brain, nor does it kill pain. It simply prevents opioids from binding there, which can temporarily reverse an overdose. The effects of naloxone begin within 2-5 minutes after the medication is administered.

The Food and Drug Administration has approved a few types of naloxone for use in different scenarios. These include:

Naloxone is considered a completely safe medication for use in most people. Rarely, a person may be allergic to naloxone, which can cause some side effects. However, the most common side effects from naloxone are those of opioid withdrawal, as the drug kicks opioids off the brain’s receptors.

The side effects of Naloxone include:


If a person receives naloxone through an injection, the injection site may become infected, or they could experience an allergic reaction. This could involve various symptoms, such as:

Other signs of an allergic reaction to naloxone include:


How Has Naloxone Impacted the Opioid Epidemic?

All but six states in the United States had approved Good Samaritan laws, naloxone access laws, or both, as of July 2015. Of those, 37 states allow naloxone to be prescribed to third parties, such as family members, caregivers, and friends of people who may be at risk of an opioid overdose. In many cases, these individuals are people living with chronic pain, who take specific, physician-monitored doses of opiate medications to ease pain. However, some of these third parties may be related to or involved in the lives of people struggling with an addiction to opioid drugs.

Although some people are concerned that wider use of naloxone will lead to more people abusing opioid drugs, the medication has saved several lives so far. In Maine in 2014, for example, 208 people died from opioid overdoses, but emergency responders were able to save 829 lives by administering naloxone. According to the Centers for Disease Control, 83 percent of lives saved from opioid overdose nationwide involve a person on the scene, not an emergency responder, administering naloxone then calling 911.

The World Health Organization estimated that 69,000 people die every year around the world due to opioid overdoses. New WHO guidelines, released in 2014, recommend expanding the use of naloxone in every country. The medication has also been placed on WHO’s list of vital medicines.

Get Help for Opioid Addiction

Naloxone is a stopgap so a person suffering an opioid overdose has more time to get emergency medical treatment. Although it is possible to suffer an opioid overdose accidentally, by mistakenly taking too much of a prescribed narcotic painkiller, most people who suffer from these overdoses also struggle with addiction to these drugs. In search of a euphoric high, they may take too much heroin, fentanyl, or OxyContin, and suffer an overdose as a result. It is very important for these individuals to have access to naloxone, but it is even more important for them to have access to help to overcome their addiction.

Rehabilitation programs all over the country help people overcome narcotic addictions. Medical professionals and therapists in the program come up with a detox plan, as well as individual and group therapy sessions. The person both ends their physical dependence on opiates and learns about the roots of their addiction, how to avoid emotional triggers that might lead to relapse, and acquires coping mechanisms for stress. This helps to reduce risk of relapse and support the person in developing a sober, balanced lifestyle.

Recovery First, one of American Addiction Centers’ Florida drug detox and rehab centers, is ready to help you overcome addiction and find long-term recovery. Call us today at to learn more about addiction treatment near you.

treatment
Prefer getting help via text?
We're available 24/7 via text message. Signup below for access to our team when its convenient for you!
and many more...
✕
Instantly Check Your Insurance Coverage
Your information is safe & secure
At Recovery First, we accept most types of private (non-government) insurance and offer a variety of payment options.
You can quickly and privately check your insurance benefits to see if you're covered for addiction treatment services. We’ll be able to tell you if your provider is in network with Recovery First Treatment Center and all American Addiction Centers locations.
This means your treatment may be FREE1 depending on your policy, copay, and deductible.
Get the Info & Help You NeedLearn about the options available at our South Florida addiction treatment center.