How Can Paxil Help You in Addiction Recovery? 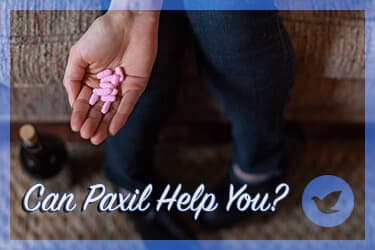 Also known as by its generic name paroxetine hydrochloride, Paxil works by controlling the levels of serotonin in the brain. It blocks serotonin reuptake, allowing for more space between the brain’s nerve cells. In turn, this gives serotonin a greater chance of activating the receptors on the next nerve cell. This gives the user a decreased sense of anxiety.

Paxil’s Use in Addiction Treatment

Paxil is often prescribed in addiction rehabilitation centers. Many people struggling with addiction are also dealing with co-occurring mental health issues, such as depression or anxiety. In fact, undiagnosed mental illness is a very common reason that people self-medicate with drugs or alcohol. In a rehab setting, mental health experts can offer strategies to deal with anxiety and depression, as well as medication to treat the chemical source of the issue. This is where Paxil may come in. Other mental health conditions, like post-traumatic stress disorder and some eating disorders, can also be treated with Paxil.
As with all medications, Paxil should only be used as part of a larger treatment program. On its own, medication is not enough to address mental health issues or addiction; it must be used in conjunction with therapy.

Researchers at the California Pacific Medical Center studied Paxil’s effectiveness in treating those with both alcoholism and social anxiety. They split 42 participants into two groups. Half received a placebo, while the others took Paxil. The group that took Paxil had fewer occurrences of anxiety in group situations.

While anxiety is just one of the common symptoms associated with drug and alcohol withdrawal, its effects can be crippling. When dealing with anxiety, clients in addiction recovery may be unable to focus on the recovery process or make significant progress in therapy. In these instances, Paxil may help to alleviate anxiety, allowing clients to fully focus on the treatment at hand.

What makes Paxil a good choice for people in recovery? Other kinds of medications, such as benzodiazepines like Ativan, Klonopin, and Xanax, come with a higher risk of dependency, the Journal of the American Academy of Family Physician reports. Since Paxil is an SSRI, it is not as addictive. The United States government has not classified Paxil as habit-forming. Very few people become dependent on the drug.

Virtually all pharmaceuticals involve side effects of some kind. Even when taken as directed, Paxil may cause uncomfortable side effects in users. Normal use of Paxil can result in the following issues:

More serious side effects can include fever, trembling, blurred vision, and suicidal thinking. These are much less common that the side effects listed above, and they should be brought to the attention of a doctor if experienced.

Addiction to Paxil is rare, but it can occur. Some doctors believe people with social anxiety can become dependent on Paxil. Though SSRIs are believed to be non-habit-forming, addiction can occur if the drugs are repeatedly misused. Some people attempt to get high by taking multiple doses of Paxil at once. The resulting boost in serotonin may make them feel like they have achieved their goal. Though Paxil is not physically addictive, the psychological experience of such misuse can certainly be habit-forming. In addition, those who abuse SSRIs often do so in conjunction with alcohol or other drug abuse. This compounds the likelihood of addiction.

When to Avoid Paxil

Children and adolescents should not take Paxil. The makers of Paxil, GlaxoSmithKline, came under fire in 2012 for this. The US Department of Justice fined the pharmaceutical company $3 billion for illegally promoting the drug to people under the age of 18. The company also created a report that misled readers into believing Paxil was effective in treating adolescent depression. In fact, Paxil can trigger serious suicidal thoughts in people under the age of 18.

Drinking alcohol and using illegal drugs can negatively interfere with the effects of Paxil. Alcohol and drugs can weaken the effectiveness of the medication and increase the sedation associated with Paxil. Of course, those in addiction treatment should not be using drugs or drinking.

Pregnant women should also avoid taking Paxil. Per the Food and Drug Administration (FDA), research studies have shown that taking Paxil during early pregnancy can result in a higher likelihood of birth defects. As a result, Paxil is rated a class “D” medication by the FDA. In some instances, the benefits of taking Paxil while pregnant may outweigh the risks, but this decision should only be made under the direct supervision of a physician. Pregnant women undergoing addiction treatment should be closely supervised to ensure their safety as well as the safety of their fetuses.

The Need for Comprehensive Treatment

Paxil can be a useful tool in addiction treatment for many people. Supervising physicians, in conjunction with the entire treatment team at a rehabilitation center, will make the decision regarding use of Paxil for specific clients. Medications like Paxil are only one aspect of addiction treatment; they should be used in conjunction with comprehensive therapy to ensure the best chances of sustained recovery.

detox
Help is a Phone Call Away
Please don't suffer with substance abuse thinking no one cares. We care and want to help you get back to the life you deserve.
Are you covered for addiction treatment? Find your insurance.
and many more...
✕
Instantly Check Your Insurance Coverage
Your information is safe & secure
At Recovery First, we accept most types of private (non-government) insurance and offer a variety of payment options.
You can quickly and privately check your insurance benefits to see if you're covered for addiction treatment services. We’ll be able to tell you if your provider is in network with Recovery First Treatment Center and all American Addiction Centers locations.
This means your treatment may be FREE1 depending on your policy, copay, and deductible.
Get the Info & Help You NeedWe're open across the US. Learn about your options.