The Motivational Interviewing (MI) technique was developed as a result of the ambivalence displayed by individuals with substance use disorders to therapists during both the initial assessment of their issues and their treatment. William Miller initially developed some ideas and guidelines for the initial interviews of individuals with alcohol abuse issues and later collaborated with Stephen Rollnick to refine the approach that has been come to be known as the MI technique.

The MI technique was designed to help clinicians to identify where individuals with substance abuse issues stood regarding their understanding of their substance abuse. Since the initial conception of the technique, there have been many refinements that have resulted in the technique being used for numerous other purposes.

It should be understood that the information in this article is provided for educational purposes only and should not be used by individuals who have no formal training in the assessment and treatment of mental health disorders. Only licensed mental health clinicians can assess, diagnose, and treat these disorders.

The Transtheoretical Model of Change

The aspect of Motivational Interviewing that most individuals are familiar with is the stages of change model. The original development of the MI model was designed to identify where an individual with a substance abuse issue stood regarding their perception of their need to address the problem. Many times, individuals who enter treatment for substance abuse issues do not readily accept the notion that there is something about their behavior that they need to change. Often, these individuals are forced into treatment by family, their occupation, the legal system, etc. They may not have developed the notion that their behavior is problematic for them and may believe that they are able to control their issues with alcohol or drugs in such a manner that they can continue using their substance of choice and avoid the particular issues that brought them into treatment.

Miller and Rollnick realized that in order for any intervention for any type of substance use issue to be successful, it would be important to understand how the client visualized their substance use. Individuals who demonstrated behavioral issues sufficient to qualify for a diagnosis of a substance use disorder, but who did not see the need for substance abuse treatment, would need to be approached differently than individuals who already agreed with the idea that they must change their behavior (e.g., they must stop using drugs or alcohol).

The transtheoretical model of the stages of change that was subsequently developed by Miller, Rollnick, and their associates hypothesized that individuals entering therapy did not begin at the same starting point. Thus, the initial task of the therapist is to identify where the client stands on their willingness to accept their need for change and their understanding of their issues. Once the person’s starting point is identified, it becomes a matter of adjusting treatment to fit the needs and understanding of the client. The hope in developing the transtheoretical model was to increase positive therapeutic outcomes for individuals entering treatment, decrease issues with resistance in clients with substance use disorders and other issues, and decrease dropout rates. Dropout rates in some substance use disorder treatment programs are much higher than expected when compared to dropout rates for individuals entering treatment for other issues particularly.

The Stages of Change Model

According to the model, the stages of change are:

The conceptualization by Miller and Rollnick is not one of a linear process with a designating starting point and a designated ending point. Individuals may enter treatment at any point along the model (e.g., at any of the stages) and may actually digress to previous stages (e.g., as a result of a relapse). The model assumes that different people start at different points in the process; some may experience setbacks and drop back, whereas others may move forward without setbacks.

The overall model is quite consistent with the experiences of mental health clinicians who treat all types of different mental health disorders, including substance abuse issues. The process of lapsing or relapsing is relatively common in individuals recovering from substance use disorders, and in some cases, relapses are accompanied by entire attitude shifts that result in these people starting over again. Recovery from a substance use disorder is rarely accomplished in a linear fashion without setbacks.

Research on the Effectiveness of MI

Despite having significant face validity (meaning that the Motivational Interviewing theory appears to be valid on the surface), research on the effectiveness of MI is rather mixed. Even research by the originators of the paradigm, Miller and Rollnick, often suffer from issues with the sample of participants that are used in their studies. One often cited study was noted to have issues with selecting participants from outpatient and inpatient sources that might not have been representative of the entire array of individuals who have substance abuse issues. It should be noted that many clinical studies suffered from issues with including participants that may be suitable for the intervention used in the study and deliberately excluding participants who might somehow not be appropriate for the particular intervention. When researchers qualify their results according to these issues, this is most likely not a serious methodological issue (e.g., the researchers report that the intervention is most appropriate for a particular type of client and may not be appropriate for others). However, when researchers do not make the specifications, they can be problematic. Research studies that include a wider variety of participants often find less convincing evidence for using the technique for all clients. 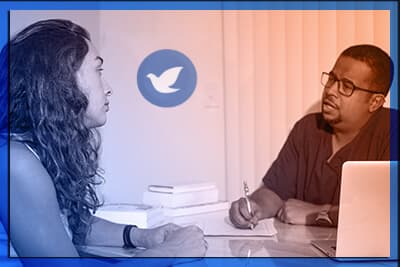 Likewise, meta-analytic studies that investigate the results of numerous individual studies have produced mixed results regarding the efficiency of Motivational Interviewing. For instance, one meta-analytic study found positive effects for the use of MI and found that MI was more efficient than more traditional methods employed by clinicians who often try and convince resistant clients that they need substance use disorder treatment. Other meta-analytic research has not found significantly positive effects for the use of MI.

Even though the use of meta-analytic studies is preferred as being stronger evidence for the effectiveness of a particular intervention, the studies can still be affected by the types of inclusion criteria the researchers use. Not including a full array of studies (e.g., studies that have both positive and negative effects for the intervention or not including studies with diverse samples) can affect the outcome of this research. This feature of all research emphasizes the importance of having treatment providers who can critically evaluate research evidence and understand how to apply it.

MI, like many very specialized interventions, has a number of very enthusiastic supporters who constantly tout its benefits, whereas it also has a number of harsh critics who claim that the technique is not useful over the wide array of potential clients that are referred for treatment of substance abuse issues. This is a situation where both camps are correct and incorrect when the context of their claims is taken into consideration. There is no one form of therapy or therapeutic intervention that is appropriate for everyone and works in every instance. Unfortunately, this feature of all behavioral therapies is often overlooked.

The research does most likely indicate that Motivational Interviewing works better than no intervention at all and that MI is a type of intervention that may not be applicable for everyone in substance use disorder treatment, but many individuals may benefit from it. The current status of MI indicates that it is quite popular as a potential intervention and used in a number of different contexts outside of substance use disorder treatment (e.g., in education); however, like any other intervention, it has specific strengths and weaknesses and should not be considered a “one-size-fits-all” approach. Combining some of the principles of Motivational Interviewing with other empirically validated approaches may increase its overall effectiveness.

Call us at to learn more about Motivational Interviewing and other substance abuse treatment offerings at Recovery First, one of American Addiction Centers’ Florida rehab facilities near Ft.Lauderdale.

Prefer getting help via text?
We're available 24/7 via text message. Signup below for access to our team when its convenient for you!
and many more...
Get the Info & Help You NeedLearn about the options available at our South Florida addiction treatment center.