Ativan is the brand name for the generic drug lorazepam. This medication is prescribed primarily to treat anxiety, but it is also sometimes prescribed to treat other disorders, like insomnia, epilepsy, irritable bowel syndrome, alcohol withdrawal symptoms, or stomach upset related to cancer treatments. Ativan is one of the medications in the benzodiazepine family, so it has similar effects to Xanax (alprazolam) or Valium (diazepam). Benzodiazepines are central nervous system (CNS) depressants.

Intended Use and Addiction Potential

Like other benzodiazepine medications, Ativan works on the GABA receptors in the brain to induce a sense of calmness and relaxation. For people struggling with generalized anxiety disorder, or other conditions that involve panic or anxiety, this sense of wellbeing is very helpful. Doctors prescribe Ativan at the lowest possible effective dose, and most people with Ativan prescriptions begin to feel the effects of the medication within 1-3 days.

Originally, benzodiazepines were considered a safer replacement for barbiturates, which often led to high levels of abuse and addiction. However, Ativan can easily lead to tolerance, dependence, and addiction. People with prescriptions for Ativan should not take this medication for more than four monthswithout consulting their doctor, and medical professionals should be careful to monitor their patients for symptoms of benzodiazepine abuse and addiction.

Ativan is one of the most prescribed medications in the world, which means that more people have the potential to become addicted to this medicine due to exposure. Benzodiazepines like Ativan are among the most abused prescription medications, according to the Centers for Disease Control. Prescribing practices for benzodiazepines are informed by the Drug Enforcement Administration’s Schedule: Ativan and other benzodiazepines are listed as Schedule IV drugs, because they are believed to have a low potential for abuse and low risk of dependence. In contrast, opioid painkillers like hydrocodone and oxycodone are Schedule II drugs due to their risks of addiction.

Ativan is a short-acting benzodiazepine. When people become tolerant to this medication, they will not feel all the effects of the medication, and they may feel the need to up their dose to feel normal or to achieve the same effects. Short-acting benzodiazepines have a higher risk of addiction and dependence, because the person taking them will not feel the medicine’s effects for as long.

People with a history of substance abuse have a higher risk of developing an addiction to benzodiazepines like Ativan. This is especially true for people taking Ativan to relieve alcohol withdrawal symptoms, because both of these drugs are CNS depressants and can induce a similar type of euphoria. Abuse of Ativan and other benzodiazepines is also high among those who also abuse heroin or cocaine.

Older adults are at a higher risk for abusing Ativan. This is in part because they likely received benzodiazepine prescriptions off and on over the course of their lives, and also because of how the body’s metabolism changes as it gets older. Ativan is processed in the liver by specific isozymes before being released into the bloodstream; however, the liver stops producing many of these isozymes as the body ages, so benzodiazepines can more quickly build up to toxic levels in the body. This increases the risk of physical injury from falls, and it also increases the likelihood of getting “high” from the drug.

People with Ativan prescriptions are the most likely demographic to become addicted to this medication. However, prescription drugs are often diverted – sold or given away – for illegal recreational uses. Since Ativan is a short-acting benzodiazepine, it is a preferred drug of abuse among those who use benzodiazepines for nonmedical reasons.

Ativan has a short half-life of around 10-20 hours, and people with prescriptions tend to receive relatively large doses of this drug.

Side effects of Ativan include:

Risks of Ativan Addiction and Abuse

Benzodiazepines like Ativan are rarely the only drug of abuse. People abusing Ativan are more likely to simultaneously abuse alcohol or other drugs, typically opioid painkillers. According to American Family Physician, 80 percent of benzodiazepine abuse is part of a polydrug abuse pattern.

Symptoms of Ativan overdose include:

Flumazenil is the only drug right now that is a specific antidote for benzodiazepine poisoning. If a person suffers an overdose of Ativan or another benzodiazepine, medical professionals will likely administer flumazenil to slow or stop symptoms. However, flumazenil is less effective in polydrug overdoses, which are the majority of benzodiazepine overdoses. This medication is also not a treatment to detox from Ativan.

Attempting to detox from Ativan addiction on your own is not safe. Although the drug exits the body fairly quickly – it is completely gone in three days – withdrawal symptoms are likely to continue while the body adjusts to the loss of the medication. As with all benzodiazepines, medical detox is needed for Ativan withdrawal.

Seizures are more likely in people who have abused Ativan for a long time or who have recreationally taken very large doses of the drug. Seizures are some of the more dangerous symptoms in the cluster of benzodiazepine withdrawal syndrome (BWS), which can be physically dangerous. Other symptoms of BWS include psychotic reactions like hallucinations, delusions, or paranoia. 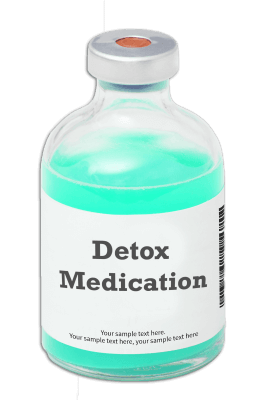 Although tapering off the drug can take longer than just ceasing use of Ativan, it is much safer. The tapering process, sometimes called titration, can take about six months, although it might last longer in some cases, depending on the doctor’s recommendation and the patient’s symptoms.

Tapering is especially important for benzodiazepine abuse, since most people who struggle with addiction to Ativan at one time received a legitimate prescription for the medication. This means they have underlying mental health conditions that must be carefully monitored. Some of these conditions, such as anxiety, panic, insomnia, and even seizures, can either be withdrawal symptoms or the original, underlying condition asserting itself. For people attempting to detox from Ativan cold turkey, this recurrence of symptoms can cause them to relapse because they believe they still need the medication; however, a doctor can determine whether the symptoms are the original condition or symptoms of withdrawal.

This process can guide ongoing treatment, which can include switching to a long-acting benzodiazepine like diazepam or taking small doses of an antidepressant to ease symptoms. Other medications, such as anti-seizure medications or antipsychotics, can also be used during the detox process, to ease more serious symptoms of benzodiazepine withdrawal.

Get Help for Ativan Addiction

A complete rehabilitation program is the best way to successfully detox from Ativan and achieve sustained recovery. Therapy is the cornerstone of addiction treatment, and it comes in various forms. In therapy, clients in addiction treatment will uncover the reasons why they began abusing Ativan and devise ways to deal with life’s stresses without turning to substance abuse again.

Recovery First, one of American Addiction Centers’ Florida benzo rehab centers, is ready to help you overcome addiction and find long-term recovery. Call us today at to learn more about addiction treatment near you.

ativanbenzodiazepinesprescription
Prefer getting help via text?
We're available 24/7 via text message. Signup below for access to our team when its convenient for you!
and many more...
✕
Instantly Check Your Insurance Coverage
Your information is safe & secure
At Recovery First, we accept most types of private (non-government) insurance and offer a variety of payment options.
You can quickly and privately check your insurance benefits to see if you're covered for addiction treatment services. We’ll be able to tell you if your provider is in network with Recovery First Treatment Center and all American Addiction Centers locations.
This means your treatment may be FREE1 depending on your policy, copay, and deductible.
Next Steps & ResourcesFind help & resources or learn more about Recovery First.