What Are the Side Effects of Using Campral? 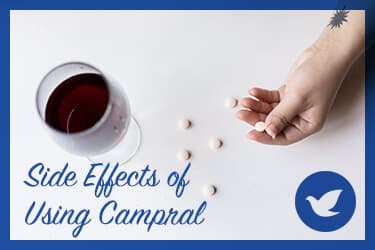 Campral, also known as acamprosate calcium, is used to reduce cravings in those dependent on alcohol. A relatively new drug, Campral has only been in use since the late 1980s. The drug was approved by the United States Food and Drug Administration in 2004. Now, Campral is one of several alcohol abstinence drugs included in the Substance Abuse and Mental Health Administration’s Treatment Improvement Protocols.

Campral is a gamma-aminobutyric acid, or GABA, agonist. The drug stimulates GABA receptors, inducing a sense of calm and a reduction in anxiety levels. It is incredibly useful for people struggling with alcohol addiction, as it reduces cravings. When someone is addicted to alcohol, their brain changes chemically. Campral helps to stabilize the chemistry of the brain that was disrupted by ongoing alcohol abuse.

Scientists do not fully understand why Campral is effective. According to the Journal of the American Family Physician, scientists believe the drug inhibits neurological receptors in the brain that are related to addiction. At the same time, Campral opens up receptors that impact overall nervous system activity.

Campral is most frequently used by people seeking to permanently abstain from alcohol, rather than those simply wishing to scale back the frequency of their drinking. The drug is typically introduced five days after a person’s last drink. Campral is safe to use with alcohol though, so it can be introduced before withdrawal is complete in some instances. It is also safe to use with benzodiazepines and opioids, reports the Canadian Agency for Drugs and Technology in Health. This can be useful if a person is dealing with polysubstance abuse and needs to be tapered off opioids or benzodiazepines during recovery.

Frequently prescribed in 333-milligram tablets, Campral is typically taken three times daily. Depending on the dosage, doctors may recommend taking the medication with food. The drug should never be crushed or broken up. It is important that the dosage is not altered in any way unless recommended by a doctor. Taking more Campral will not speed up results, but it could increase the side effects associated with the drug.

A study published in the Archives of General Psychiatry illustrated the benefits of using Campral and naltrexone, a drug that can reduce the desire to take opioids, together. The combination of these drugs can be more effective than Campral on its own. Disulfiram, a drug that causes an unpleasant reaction to alcohol, is also sometimes used in conjunction with Campral.

Side Effects of Campral

Side effects of Campral range from relatively benign to incredibly serious. The most common side effect is diarrhea, which affects 10-17 percent of users. Other symptoms may include:

Some users of Campral experience other more serious side effects, Drugs.com reports. Depression and suicidal thoughts are possible in some people who take the drug. Dangerously low blood pressure, impaired kidney function, and cardiac arrhythmia are other serious Campral side effects. Some people also experience cognitive impairments, hypertension or tingling in the hands and feet. In some male Campral users, sexual dysfunction can be a problem.

Not everyone should use Campral. People struggling with depression or suicidal thoughts should not take the medication. Neither should those with kidney disease or dysfunction. People who are allergic to sulfites, dyes, and preservatives should also avoid Campral. Pregnant women or mothers currently breastfeeding should not take the drug either.

No medication is a cure for addiction; it’s a chronic disease that can be effectively managed but medication is only one component of a treatment program. Campral can help those who are dependent on alcohol but only to some degree.

Doctors recommend Campral only in conjunction with more traditional addiction treatments like therapy. Campral does not make people quit drinking, nor does the drug treat symptoms associated with alcohol detoxification. Indeed, Campral should only be used in those who have already undergone withdrawal from alcohol. The Journal of Clinical Psychiatry says the drug should not be the only tool used in staying sober, as it is not powerful enough to ensure long-term sobriety on its own. Experts recommend using Campral alongside other addiction treatment strategies.

One of the reasons why Campral is so useful in treating alcohol addiction is that the drug is not habit forming. It is not a controlled substance in the United States, nor does it cause users to build up a tolerance to their prescribed dosage. Campral carries very little risk of overdose. The drug also has no known withdrawal symptoms. Campral use can be stopped immediately, without a tapering down process.

Campral is not dangerous, but caution should be used when taking it. The drug may impair a person’s ability to operate heavy machinery, so users should avoid driving while taking it.

A clinical trial at the University of North Carolina Chapel Hill found that people taking Campral had a much better chance at long-term recovery than those taking a placebo. Still, the researchers acknowledged some limitations. Campral is best for those dealing only with alcohol addiction. People abusing multiple substances at the same time were less successful with Campral than those facing alcohol dependency alone.

As mentioned, Campral is much more effective when used by a person undergoing group or individual therapy. Pharmaceuticals can help to treat alcohol addiction, but without addressing the root cause behind the abuse, only so much progress can be made.

Once sobriety has been achieved, it is not necessary for Campral use to stop. Since Campral is not addictive, its use is not generally considered harmful. Once a person has a strong foundation in recovery, their supervising physician may recommend that they stop taking the medication.

prescriptionside effects
Ready to get started?
We're available 24/7 to answer questions and help you make decisions about starting recovery from drug use.
Next Steps & ResourcesBrowse helpful articles and find treatment options.