Hollywood, Florida has a large population for a city in Broward County; there are almost 147,000 residents, with a median age of 41 years old. The southern Florida city is near the Atlantic Coast, and the city’s home county is sandwiched between larger Palm Beach and Miami-Dade Counties. 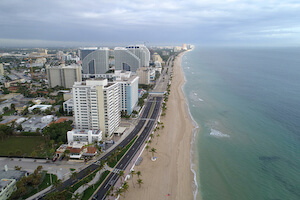 The National Survey on Drug Use and Health (NSDUH) puts Broward County in the Miami-Fort Lauderdale-Pompano Beach metropolitan area. As a less populated area between Palm Beach County and Miami-Dade County, this makes sense for survey purposes. The NSDUH found these rates of substance abuse among people ages 12 and older between survey years 2005 and 2010:

Florida’s Youth Substance Abuse Survey (FYSAS) has county-based reports for 2016 of both middle and high school students’ patterns of substance abuse. Hollywood is located in Broward County, which has been the focus of several dangerous substance abuse trends in the past few years, so the county shows particular concern for its adolescents. The county had 1,359 students in grades 6-12 who participated in the 2016 FYSAS. Four high schools in Broward County topped a 2015 list of schools with the most drug-related incidents.

Florida was once a hub for prescription drug abuse in the country, due in large part to pill mills – clinics in which doctors spent very little time with patients before prescribing huge doses of opioids, barbiturates, benzodiazepines, and other intoxicating, dangerous substances. Although the state has been cleaning up these clinics since 2009, and changing legislation around all kinds of substances of abuse, many cities and counties still have serious problems with prescription drug abuse. Unfortunately, cities like Hollywood in Broward County are not immune to these problems.

The Opioid Overdose Epidemic in Hollywood

Fentanyl is another large problem in the county. By the end of the first quarter in 2016, Broward County experienced a 210 percent increase in heroin-related overdose deaths and a 100 percent increase in overdoses related to fentanyl. In the fall and winter of 2016, a new opioid called carfentanil began devastating the population of Broward County; this version of fentanyl is over 100 times more potent than its parent drug and 10,000 times more potent than morphine. Memorial Regional Hospital in Hollywood, Florida, reported at least 40 instances of carfentanil overdose; there have been 53 reported overdose deaths across Broward County. Like fentanyl, carfentanil laces other drugs or is disguised as heroin, cocaine, or prescription pills.

I WANT TO LEARN MORE ABOUT:

In Broward County in the first half of 2013, there were 51 reports of alprazolam-related death; in 63 percent of those cases, the benzodiazepine was found to have caused death. However, all those reports involved polydrug abuse, with at least one other substance present in the blood at the time of death. Diazepam, or Valium, was reported to be involved in 22 deaths in Broward County that year; in 41 percent of those instances, diazepam was the cause of death. All the overdose deaths involved at least one other intoxicating substance.

About 2 percent of admissions to publicly funded treatment programs involved benzodiazepine addiction or abuse in 2013; this was a total of 73 individual admissions. Women represented the majority of these substance abuse treatment admissions at 66 percent.

Just like neighboring cities in South Florida, Hollywood struggles with a serious cocaine abuse problem. The NSDUH from 2008-2010 found that 8 percent of the people in Florida who struggled with cocaine abuse were in Broward County; that represents 22,710 individuals ages 12 and older.

United Way of Broward County reported that 41 people died in 2013 as a result of cocaine abuse; many of these people were found to have a combination of cocaine and other drugs in their bodies. The average age of people who die from a cocaine overdose, or seek treatment to overcome cocaine addiction, is over 35 years old. Of 3,611 admissions to publicly funded treatment facilities in Broward County, 10 percent of cases (285 people) struggled with crack cocaine. Another 85 admissions involved powdered cocaine.
Although more people in South Florida struggle with cocaine abuse compared to the rest of the country, the overdose death rate appears to be declining. In 2012, there were 129 cocaine-related deaths. Still, Florida saw an overall decline of 9 percent in cocaine-related deaths between 2011 and 2012 while Broward County experienced an increase.

The state of Florida has been a hotbed for synthetic cannabinoids like Spice and K2 and synthetic cathinones like bath salts or flakka. Florida has passed legislation banning these drugs based on their effects, but many people are still hospitalized due to the psychosis, overheating, and violence associated with these drugs. These symptoms do not necessarily signify an overdose; they are common and dangerous problems associated with “normal” doses of synthetic cathinones.

In summer 2015, four major hospitals in Broward County reported that they had 12 hospitalizations per day from a synthetic cathinone called alpha-PVP. A reported 25 people died from alpha-PVP complications in Broward County between September 2014 and June 2015. There were three deaths from ethylone, a new synthetic cathinone. Other hospitals in the county reported between 15 and 20 admissions from overdoses or excited delirium tied to alpha-PVP since March 2015. Thanks to recent legislation and a rise in law enforcement seizures, there were only two cases per day by 2016.

Alcohol consumption patterns among Broward County’s youth were lower than many counties in the state and similar to its larger neighbors, Palm Beach and Miami-Dade Counties. Middle school students were in Level 3 in the survey, meaning 8.6 percent self-reported consuming alcohol in the past month, and about 3 percent self-reported binge drinking specifically. High school students were in Level 2, with 24.5 percent self-reporting any alcohol consumption in the month before the FYSAS, and 9.1 percent reporting at least one past-month episode of binge drinking. High school students in the county were also among the state’s least likely to ride in a car with a driver who had been drinking, with 14.5 percent reporting this activity. Broward County’s high school students were also much less likely to drive after drinking, with 4.7 percent reporting this in the past 30 days.

Alcohol use disorder or problem drinking is the second leading reason people in Broward County seek treatment for substance abuse. About 30 percent of treatment admissions in publicly funded facilities involve alcohol abuse, or about 1,104 people. There may be a much larger problem with alcohol consumption in the county, however:

Almost 22 percent of driving deaths in Broward County in 2016 involved alcohol; just over 18 percent of the population drinks excessively, which includes heavy drinking and binge drinking.

Although marijuana is most often abused by men, especially adolescent or young adult males, women are beginning to consume the drug too. In Broward County, 15.3 percent of male students in middle and high school abused marijuana; this number declined to 9.7 percent in 2014. However, 10 percent of girls in that age group abused marijuana in 2012; their numbers rose to 12.2 percent of marijuana users in 2014.

Broward County is also a center for a specific kind of marijuana product that can be extremely dangerous: wax, budder, or butane hash oil is made from leaves and stems soaked in a solvent, often butane, to extract the intoxicating cannabinoids. As butane evaporates, there is a sticky residue often smeared onto joints or cigarettes, or put into pipes, and smoked. Most often, it is vaporized through an e-cigarette or other vaporizer. This dangerous mix of chemicals is more like abusing inhalants than marijuana, and it can lead to severe side effects, including:

According to the Mental Health Substance Abuse Commission Report of the States (MHSAC), Florida meets, at best, 19 percent of the state’s needs for treatment among people struggling with substance abuse and addiction. Due to the implementation of the drug court system, Broward County reflects Florida at large, focusing on criminal charges instead of widespread treatment. Throughout much of Florida, if a person is charged with possession or use of a drug, these charges can be reduced or eliminated if they voluntarily enter treatment through the drug court system; however, Broward County residents also face $100 fines and citations if they are caught with marijuana or other substances.

Access to substance abuse treatment and prevention both in and out of the criminal justice system is especially important in the South Florida region, which includes Broward, Miami-Dade, and Palm Beach Counties. Two major international airports – Miami International and Fort Lauderdale-Hollywood International – offer cargo and passenger aircraft services, which drug smugglers take advantage of. The Broward County Sheriff’s Department reported marijuana smuggling operations in the area in 2011, primarily coming from Mexico. The area is also an epicenter for heroin, cocaine, and methamphetamine smuggling operations, although most of the drugs brought into Broward County are destined for markets outside the South Florida region.

Florida’s DOH can help residents to find and manage resources for treatment, including detox and rehabilitation, in Hollywood or elsewhere in the Sunshine State. DOH will likely refer people to the Substance Abuse and Mental Health (SAMH) program run by the Department of Children and Families (DCF). SAMH manages credentials for various treatment programs in Florida and also offers a residential treatment option of its own. DCF also keeps a thorough, updated list, in alphabetical order by city, of treatment options across the state; Hollywood’s numerous options begin on page 26.

local
Prefer getting help via text?
We're available 24/7 via text message. Signup below for access to our team when its convenient for you!
and many more...
Ready for Recovery?See what brings people to Recovery First for help.