Why Is Fentanyl So Deadly?

Fentanyl used to be a relatively unknown medication, but it has recently gained notoriety as a central figure in the opioid epidemic.1 This powerful synthetic opioid medication is prescribed legally in various forms under various brand names, including:2

Fentanyl is also produced and sold illegally. Fentanyl, especially illicit fentanyl and its analogues, has caused an alarming number of opioid overdose deaths in the past decade. In 2018, the U.S. saw more than 30,000 overdose deaths involving synthetic opioids other than methadone, which includes fentanyl.3 The side effects of fentanyl are similar to that of heroin.4

In 2018, the U.S. saw more than 30,000 overdose deaths involving synthetic opioids other than methadone, which includes fentanyl.

Fentanyl binds to opioid receptors in the brain to relieve pain.4 However, pain relief is not the only effect of fentanyl. Side effects of fentanyl include:4,5

Fentanyl is an incredibly powerful opioid painkiller.6 It is 50-100 times more potent than morphine, and even just a small amount can cause a fatal overdose.6,7

Because it is so potent, this medication is primarily used for very severe pain, such as post-surgical pain. It is also used in the treatment of chronic pain in people who have become tolerant to other opioids.4

How Much Fentanyl Is Lethal?

How much fentanyl is lethal may vary from person to person; however, as a general rule, it takes an extremely small amount of fentanyl to cause a deadly overdose.8 The United States Drug Enforcement Administration (DEA) produced the following image to demonstrate just what a small amount (2 milligrams, the size of 2 grains of salt) of fentanyl can be deadly in most people: 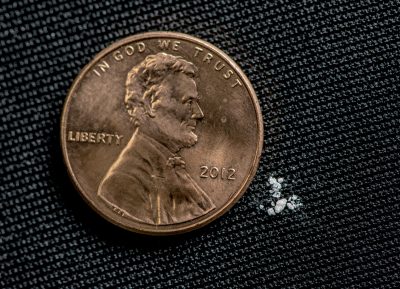 Symptoms and Signs of a Fentanyl Overdose

A fentanyl overdose can happen quickly. An overdose on fentanyl or other opioids can usually be identified with 3 characteristic symptoms, known as the opioid overdose triad:10,11,12

Other signs of opioid overdose include:12

In the case of a fentanyl overdose, immediate action may save the person’s life. If you notice the signs an opioid overdose in another person, call for emergency help right away. If you have naloxone (Narcan) and know how to use it, administer it immediately. Lay the person on their side to prevent choking and stay with them until help arrives.10,12

Fentanyl-involved overdose deaths are not limited to those who knowingly abuse fentanyl or heroin. Often, fentanyl is found in other drugs and its presence is not known to the people who purchase and use these drugs.8 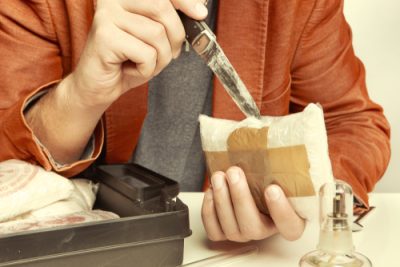 In August of 2020, the DEA, in combination with San Diego County officials, warned of a sharp rise in overdose deaths involving illicit drugs laced with fentanyl in San Diego County. The warning included a reminder that dealers are continuing to add fentanyl to various illegal drugs, and that the combination is a “recipe for death.”8 This problem occurs not only in San Diego but all over the country.

Many people know that heroin is often laced with heroin, but they may not be aware that fentanyl has been found in numerous other drugs, including cocaine, methamphetamine and illegally produced pills, such as counterfeit oxycodone or Xanax.8,13 Part of why fentanyl is so deadly is that it shows up in so many other drugs, causing life-threatening overdose in users who have no idea they’ve taken any fentanyl at all. One such example is a 19-year old man who bought 2 counterfeit Percocet pills from a friend and died of an overdose. Fentanyl was in his system at the time of death.8 Because fentanyl may be added to a number of other substances, United States Attorney Robert Brewer compared buying street drugs to a “high stakes game of Russian roulette.”8

The proliferation of fentanyl in the drug market has made it an incredibly dangerous time to be struggling with drug abuse or addiction. At Recovery First, we have an array of programs to help you find sobriety at our Florida drug rehab center. Learn more about our treatment programs.

fentanylmixingopiateprescription
Prefer getting help via text?
We're available 24/7 via text message. Signup below for access to our team when its convenient for you!
and many more...
✕
Instantly Check Your Insurance Coverage
Your information is safe & secure
At Recovery First, we accept most types of private (non-government) insurance and offer a variety of payment options.
You can quickly and privately check your insurance benefits to see if you're covered for addiction treatment services. We’ll be able to tell you if your provider is in network with Recovery First Treatment Center and all American Addiction Centers locations.
This means your treatment may be FREE1 depending on your policy, copay, and deductible.
Next Steps & ResourcesFind help & resources or learn more about Recovery First.