Werewolves, Witches and the Accidental Consumption of Hallucinogens 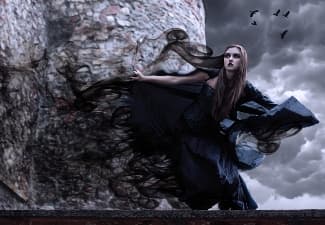 The connection between werewolves and witches and the accidental consumption of hallucinogenic compounds isn’t a recent development. In fact, over the last eight centuries various researchers, physicians and scientists have made striking cases for a correlation between local diets and werewolf and witch trials, but most were ignored.  Meanwhile, scores of people were tortured and executed for allegedly being possessed by demons and making pacts with the devil.  Tens of thousands died in Medieval Europe as a result of supposed curses either cast by witches or werewolves, or curses that caused a person to become a werewolf or witch. The truth is that despite the fact that werewolves, witches and other creatures of lore remain popular today, these fictional creatures are actually based in a dark but very real past – a past that likely included hallucinogenic food poisonings that caused mass sustained hysteria.

The Origin of the Werewolf

A surprising amount of both anecdotal and empirical evidence suggests that the werewolf hysteria that gripped Europe in the middle ages and the witch hysteria that plagued the U.S. centuries later were both caused by acute convulsive ergotism. Ergotism refers to a pathogenic condition caused by consumption of the ergot fungus.  Ergot poisoning occurs in both humans and animals. According to the North Dakota State University Agricultural Department;

“Ergot, caused by the fungus Claviceps purpurea, is a disease of cereal crops and grasses.”  “Ergot’s medicinal applications and animal poisoning properties first called attention to this plant disease. Human poisoning was common in Europe in the Middle Ages when ergoty rye bread was often consumed.” (1)

Convulsive ergotism causes muscle twitching, spasms, altered mental states, hallucinations or delusions, sweating and long term fever. (2) There is no specific treatment for ergotism except to treat symptomatically; however, discontinuation of consumption of the contaminated food source will eventually lead to the return of a normal physical state in most cases. However, changes in mental state caused by ergotism can be permanent for some people. It is these mental disturbances that are most troubling, because when combined with severe hallucinations human behavior can become extremely erratic – especially when large populations are eating the same contaminated food. According to Crystal Links.COM;

“Ergot poisoning usually affects whole towns or at least poor areas of towns and results in hallucinations, mass hysteria and paranoia, as well as convulsions and sometimes death. (LSD can be derived from ergot.) Ergot poisoning has been proposed as both a cause of an individual believing that he or she is a werewolf and of a whole town believing that they had seen a werewolf.”  (3)

Because the ergot fungus occurs in wheat, rye and other plants during certain climactic conditions, large populations of mostly poor and rural communities were affected by ergotism. It’s likely that this was at least partly responsible for werewolf hysteria in medieval Eastern Europe, where rye was a staple food and was often contaminated with ergot. Unfortunately, at the time people were unaware that this condition could be related to diet. In fact, historians have speculated that because there seemed to be no direct cause of these mass hallucinations and sicknesses, both sufferers and observers could only assume that it must be the work of supernatural powers.

However, not all the werewolf hysteria fits with the standard “evil werewolf” story. In fact, one notable werewolf trial involved an 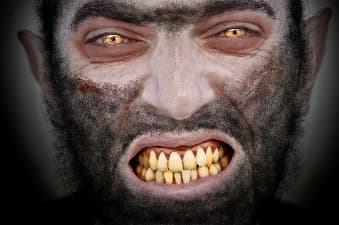 accused man who admitted to being a werewolf, but proclaimed that he was part of a league of benevolent werewolves that protected the community. The Wikipedia entry on Werewolf Witch Trials states;

“A notable case in Jürgensburg in Livonia in 1692, follows a similar pattern, but did not end in a death sentence: the eighty year old Thiess confessed to be a werewolf who, with other werewolves, regularly went to hell three times a year to fight the witches and wizards of Satan to ensure a good harvest. The court tried to make Theiss confess that he had made a pact with the Devil and that the werewolf was in the service of Satan, but they did not succeed, and he was sentenced to whipping on 10 October 1692.” (4) After his whipping, Theiss was released from captivity.

Whether Theiss was actually a victim of ergotism and genuinely believed his story, or whether he was simply a smart man keen on saving his own life is a mystery. Whatever the case may be, the fact that the court believed his story and ultimately released him during a time where people were executed simply for being accused of being a witch or werewolf is a possible indicator that ergot poisoning was occurring in the local community and obscuring the judgment of officials – for better or worse.

Other cases of supposed werewolves in medieval Europe were linked not to hallucinogenic poisoning but to acts of cannibalism or attacks by particularly aggressive animals. However, hundreds of years after werewolf hysteria had largely subsided, a new case of hysteria – this one involving witches – occurred in the New World, in the young colony of Massachusetts. The circumstances and symptoms of these cases were strikingly similar to those in Eastern Europe hundreds of years earlier. HBCI reports:

“Eight young girls began to take ill, beginning with 9 year old Elizabeth Parris, the daughter of Reverend Samuel Parris, as well as his niece, 11 year old Abigail Williams. But theirs was a strange sickness: the girls suffered from delirium, violent convulsions, incomprehensible speech, trance-like states, and odd skin sensations. The worried villagers searched desperately for an explanation. Their conclusion: the girls were under a spell, bewitched – and, worse yet, by members of their own pious community.” (5)

This event marked the beginning of the infamous Salem Witch Trials.

Two hundred years later, scientists were beginning to question the role of ergot poisoning and other types of mass hallucinations as a potential explanation for bizarre periods in human history. In fact, the great psychoanalyst Sigmund Freud recognized these potential connections. In her book Werewolves, Witches and Wandering Spirits, Kathryn A. Edwards writes;

“Freud was personally ready to concede that the Middle Ages had indeed recognized certain somatic signs of hysteria that his own time had almost completely ignored, suppressed or forgotten. Thus the young Freud clearly acknowledged the high empirical value of medieval demonological observations, even though he rejected the religious explanations of the church.” (6)

But the symptoms of ergot poisoning were not always viewed as demonic and did not always involve werewolf or witch hysteria. Some people were reported to have beautiful hallucinations despite painful physical symptoms, and some were said to have had spiritual awakenings as a result of their delusions. According to John H. Lienhard;

“In the 1740s, the so called Age of Rationalism, ergot symptoms became a mark of holy, not demonic, possession. Visions, trances and spasms were read as religious ecstasy. It was a period of religious revival that historians call the Great Awakening.” (7)

When examining the effects of ergotism and those of modern drugs that are known to produce vivid hallucinations (mescaline, psilocybin, peyote, LSD, ecstasy and other street drugs), the results all seem strikingly similar. In fact, LSD, or Lysergic Acid Diethylamide, was synthesized from the ergot fungus and has since become known as the most powerful and widely used hallucinogenic drug on the planet.

In some cases people experience vivid delusions and hallucinations while under the influence of LSD and similar substances. Sometimes the “trip” may be full of negative feelings, a sense of foreboding and even visions of monsters or other horrific sights – just as the people of medieval Europe and early America saw. In other cases these hallucinations may be a source of enlightenment and beautiful visions, as was the case during the Great Awakening. These and other similarities make the case for werewolf and witch hysteria being caused by ergotism all the more likely, although the answers may lie even closer to our own time. . .

Despite significant efforts on the part of scientists, farmers and the food products/manufacturing industry, some cases of ergot poisoning and mass hysteria have occurred fairly recently. One of these cases is documented in a detailed paper on the Ergot of Rye by the Botany Department at the University of Hawaii. The outbreak occurred in 1951:

“. . . Jean Vieu, a medical doctor in the little town of Pont-St. Esprit, in Provence, France, was the first to discover the outbreak while puzzling over two cases of patients who complained of intense pain in the lower abdomen.” “. . . some of these symptoms included low body temperatures and cold fingertips. Even stranger were the wild babbling and hallucinations.” “By August 13th, Dr. Vieu had a third patient with these symptoms. His concern of these patients led him to meet with two other colleagues and together, the three doctors had twenty patients with the symptoms just described.” “By August 14th., the town’s hospital was now filled with more patients with the same symptoms and 70 homes were required as emergency wards. When possible, victims were tied to their beds; those that escaped were running mad and frantic through the streets. All available strait jackets were rushed to the town to restrain the victims of this sickness. If there were any town’s people of Pont-St.-Esprit that were not terrified by this time, they became so when they learned of a demented, eleven year old boy, who had tried to strangle his own mother. Paranoia soon spread throughout the town . . . that this wave of dementia was due to a mass poisoning that had been carried out by the local authorities.” (8)

This well-documented case proves that ergot poisoning caused mass hallucinations and extremely bizarre and irrational behavior in those affected – en masse. And if this can happen during the last century when we as a society had already pioneered the concepts of pathogens, fungi and bacteria as the cause of disease, made significant advances in medicine and had prevention programs in place to protect against ergotism, then it’s all the more plausible (and understandable) that when similarly poisoned our far less-advanced ancestors were frightened to the point of hysteria – a hysteria that gave birth to the werewolf and the witch. . .