The Metropolitan Bureau of Investigation is reporting that 24 people have been arrested and charged with drug-related crimes as two major drug trafficking rings in Central Florida were brought down this month. Called “Operation Night’s Watch,” a year-long investigation culminated in the removal of more than 1,000 bags of heroin and cocaine a week off the streets of Florida in addition to the two dozen arrests. Those who were arrested may face trafficking, racketeering, conspiracy, and weapons charges.

Investigations like Operation Night’s Watch that end with big drug busts are the norm in Florida. There are always undercover investigations like these in the works to break up pipelines that import drugs from Puerto Rico, South America, and Central American into the US through Florida. Unfortunately, there are always more people willing to step into the gap left by arrests such as these and continue the process. It is a lucrative business because there is a demand for these substances in the United States that is steadily on the rise.

While drug investigations and law enforcement interventions are a critical piece when it comes to fighting the opioid epidemic and the staggering rates of addiction and drug overdose in the United States, it is just one action that will have a positive effect on lowering the numbers of lives lost to drugs and alcohol. 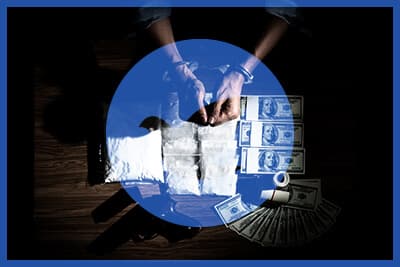 Benjamin F. Miller, PsyD, is the chief policy officer at Well Being Trust, an organization that worked with the Trust for America’s Health that recently released a report entitled Pain in the Nation: The Drug, Alcohol and Suicide Epidemics and the Need for a National Resilience Strategy. The report found that the rate of death due to drugs, alcohol, and suicide could increase by 39 percent by 2025 in Florida.

Said Dr. Miller : “We’re facing a generational crisis. And it calls for bigger and bolder action. Simply creating new programs to address one piece of the problem is insufficient – we need more robust and systematic change. The good news is: we know a lot about what works and can make a difference.”

The report offered quite a bit of information that will support and inform initiatives going forward in Florida and across the country, helping the medical community and local communities as well as law enforcement to make choices that support the health and wellness of state residents. According to the report:

As we leave 2017 behind and move into 2018, there are a number of things in the works in Florida that are directed at lowering rates of lives lost to overdose and addiction as well as untreated mental health issues that can end in suicide or homicide. Opioid crisis grants have been allocated to Florida with the sole purpose of bolstering programs that would address the problem proactively. Naloxone is being made increasingly available to responders first on the scene of an overdose call and available to families over the counter without a prescription. As more and more people gain a better understanding of the risks involved with using street drugs of any kind and are introduced to the treatment options available to them, the hope is that those in crisis will connect with treatment that will help them heal.

If drug use, untreated mental health issues, and/or alcohol use is a problem for someone in your family, what do you need to improve your life and the life of your loved one in 2018?