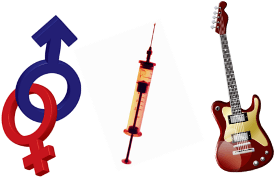 Sex, Drugs and Rock ‘n Roll
is a common dream that few will know;but many try and so the story goes
that there’s riches there in the backstage glow.
But looking in subjectively,
one must put down the cell phone, the remote and the Wii
for things in the spotlight are never what they seem
when it comes to the combination of these infamous three.

It’s a tempting image we’ve too often seen;
fans by the millions who clamor and scream;
for a glimpse, just a touch or a kiss on the cheek;
there’s no shortage of groupies and their big rock-star dreams.
So backstage they go to embrace beneath the sheets;
neither star nor fan knowing if the other is clean.
Just ask Freddy Mercury of Queen or the legend Easy E,
or ponder the math of promiscuity.:
the more sex one has the more threats one will see;
the chances of STD are about 1 in 3.

This risk is increased when one factors in drugs,
which diminish good judgment and moral aplomb.
To this many a rock star can certainly attest;
with unwanted pregnancies, herpes, syphilis and the rest…

But if the threat of disease isn’t enough,
consider the sexual dysfunction that could be caused by drugs;
with repeated use the good feelings fade
until sex feels like nothing and relationships are strained.
Then all that’s left is to get high and play; but the music, like sex, is empty and grey.

This is the way so many rock stars go;
they hide in the weed, the booze and the coke.
They wait for salvation in the fame or the dough,
but round and round with the drugs they still go.
It’s a tired old story with so many names
of rock ‘n roll legends this disease has claimed;

Janis Joplin overdosed on heroin and Hendrix choked on his own puke
while passed out and delirious on ‘barbs and on booze.
John Bonham from Led Zeppelin would likewise follow suit,
and choke on his vomit after 40 shots of booze.
Jay Bennett, from Wilco; lost to overdose,
not long after Wes Berggren from Tripping Daisy died from coke and ‘benzos.

Steve Clark from Def Leppard, Kevin DuBrow from Quiet Riot
both died far too young from a cocaine-based diet.
Slipknot’s Paul Grey died from morphine and pills,
while Sublime lost their front-man to a heroin thrill.
It was heroin too, that took Kurt Cobain and bassist friend Pfaff;
the loss to the grunge scene marred its future and past.

Some groups have lost more than one member to
the scourge of addiction, the call of drug abuse –
The Pretenders, The Grateful Dead, Alice in Chains and The Who
were all scarred forever when their deaths numbered 2.
But it’s not a problem isolated to just these few;
The Temptations, Sex Pistols, AC/DC, Blues Traveler, Weezer, Mad Season, Avenged Sevenfold and Red Hot Chili Peppers all lost members too.

So it’s clear to the people and plainly we must see,
that the image of fame is not presented impartially.
And though the story won’t change and it’s long as it goes,
there’s still the allure of Sex, Drugs and Rock ‘n Roll.