How Proposed Gun Control Will Affect People in Recovery 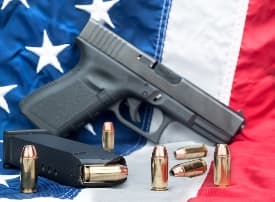 Looming gun control and weapons bans legislation in the United States will likely result in serious repercussions for people in recovery. That’s because some lawmakers want to permanently bar a large percentage of recovering drug addicts and alcoholics from owning firearms. Primarily targeting people with co-occurring conditions such as addiction and one other mental disorder like bipolar, mania, depression, anxiety and other conditions, the proposed laws are designed to prevent gun-toting lunatics from going on shooting sprees. However, they don’t take into account the fact that many law-abiding, contributing members of our communities will get caught up on the wrong side of such legislation.

For people in recovery that don’t particularly care to own or possess firearms, the potential gun control laws might not seem important. However, changes to current laws and passive persecution of recovering addicts could significantly change the lives of thousands of upstanding members of society. This is an important consideration because recovery communities are often a tightly-knit brotherhood, so even addicts that prefer not to possess weapons would do well to follow the issue and support their fellow addicts who do. For instance, consider the following uses of firearms for people in recovery:

If some lawmakers have their way, a huge percentage of people who have ever been addicted to drugs or alcohol will be forever banned from engaging in these activities – possibly ending the careers or businesses of some. In a powerful article on the subject for The Fix, Sy Mukherjee points out that around 40% of all addicts have a dual-diagnosis, technically making them “mentally ill” and therefore not suitable to own a firearm. (1)

Apparently, laws makers and gun control advocates believe that anyone who has been diagnosed with a mental illness – no matter how “benign,” cannot be responsible enough to own a firearm. This is based on the largely flawed idea that most of the lone-shooter attacks in the US this past decade have been perpetrated by mentally ill individuals. However, as Sy Mukherjee points out, most deranged lunatics never make it into the treatment setting anyway, rendering the mental illness reporting provision of proposed gun control laws ineffective:

“A paranoid loner is unlikely to end up in the office of a psychotherapist, while the people in treatment—now possibly coming under tighter surveillance—pose little risk except to themselves. If anything, mental health experts say, stricter regulation will discourage a paranoid-loner type from even considering treatment.” (1)

This idea is anecdotally supported by the fact that in most cases of school attacks and other types of mass shootings, witnesses, friends, family and neighbors indicate that there was no warning and no severe mental illness warranting fear of attack or any other signs of an impending shooting rampage.

Current laws only prevent someone who has been involuntarily committed to a mental institution from owning a gun. (2) Nevertheless, this is disturbing considering that some fairly under-qualified people are able to commit others to mental institutions, and gun control legislation is seeking to “enhance mental health reporting.” (3) This means that if certain bills are passed, people in recovery who see a therapist for depression or another related condition may be reported to a national background check system that will store and use the information to restrict firearm purchases.

Other arguments cited by gun control advocates include the idea that because 40% of addicts and alcoholics have a “mental illness,” then a significant portion of that population is probably taking psychotropic medications as prescribed by their therapists. These same people argue that many of the U.S. school shootings have been related to use of psychotropic medications by the perpetrator and therefore these types of patients should be banned from possessing guns.

However, the Safe Drug Detox organization concludes that this is an inaccurate view propagated primarily by un-cited media reports. In an article from the SDD website, serious doubts about the link between school shootings and psychiatric medications are cast, and it’s likely that much of the current supposed associations are nothing more than hyperbole.

Ultimately, more study and discussion needs to occur before an entire group of people is unfairly blocked from exercising rights that are expressly guaranteed by the American Constitution. While it does make sense that recently recovered individuals should have to wait for a “proving” period before they can buy a gun, taking away these rights entirely is an affront that most people in recovery don’t deserve. Where do you think a balance on this issue can be struck? Let us know in the comments below.