How Pot Brownies Can Ruin Your Life 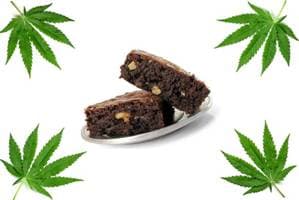 Pot brownies are often extremely potent and under the right circumstances can lead to hospitalization, imprisonment and severe career or academic consequences. This is true even in areas that are tolerant of marijuana. But considering that a majority of Americans favor legalization of the plant, understanding how edible marijuana items like pot brownies can cause significant problems is critical because many of these issues will still exist even if complete legalization occurs.

Pot brownies are the stuff of legends. Tales of feeding unsuspecting victims marijuana-laced baked goods are common in American culture and date back at least a half century or more. But while many of these stories amount to nothing more than urban legend, they do prompt some people to engage in such foolhardy behavior.

For instance, take the case of two University of Colorado students who fed their entire class – including the professor – a batch of marijuana-laced brownies. (1) Three of the victims were hospitalized and five others fell ill – a total of nearly 67% of the class. The two students responsible were arrested and are currently being held without bail. The consequences they face include the following:

*Other criminal charges pending; up to 10 felony charges for each perpetrator

*Expulsion or suspension from the University of Colorado

Similar criminal charges are expected for the individuals responsible for selling pot brownies on a public sidewalk that sickened several preschool teachers – one of whom was hospitalized. (2) This led to a massive investigation to find the source of the brownies, which were sold by an unknown group in front of a local church. However, the brownie seller was never found and taxpayers bore the cost of the fruitless investigation.

While both of the above cases resulted in no lasting harm to anyone other than the perpetrators, incidences such as these have the potential to be far more dangerous. Consider the case of three separate bus drivers in California who were unknowingly fed pot brownies by a co-worker. The bus drivers ate the brownies and then began their daily routes in San Diego before being overwhelmed by the effect of the brownies. Each of the bus drivers was able to bring their rig under control and seek treatment, but the results could have been far worse.

The bus drivers were fed the brownies by a co-worker who subsequently claimed that the drugged treats were made by his roommate. Serious charges are being considered in this case, with criminal charges recommended for the roommate and termination of employment at a minimum for the worker who fed the pot brownies to the bus drivers.

However, it’s not just criminal charges that present a risk when it comes to pot brownies. Many people have had significant life disruptions and severe academic and career sanctions as a result of eating marijuana-laced baked goods. For instance, image that you’re at a social gathering and you eat a cookie after a small meal. You feel sort of funny or perhaps a little ill afterward, but discount it as mild food poisoning.

Three days later you’re involved in a no-fault workplace accident. Standard protocol requires a drug test, which determines that you have cannabinoids in your system. Even if you correctly suspect and assert that the cookie at the social gathering was laced with marijuana, it’s not likely that this will be a permissible defense were you to be terminated from your job.

This exact scenario has happened to a number of people. U.S. Olympian Nick Delpopolo, a Judo fighter, tested positive for cannabis during a routine Olympic testing program and claimed that he had inadvertently consumed a pot brownie. His claim went unheard and he was banned from competing in the Olympics, essentially ending his career.

A similar situation arose when Kenneth Henderson, a teacher in the Atlanta school system, was terminated from his job after unknowingly eating a marijuana brownie at his own birthday party. Henderson’s nephew admitted to a local board that he laced the brownies with marijuana, but despite any other evidence or violations of school policy, Henderson was terminated anyway. He fought the case and eventually the Georgia State Board of Education agreed that he was wrongly terminated and overturned the decision. However, this came after a great deal of stress, expense and effort for months on the part of Henderson.

A final disturbing case involves the hospitalization of 3 senior citizens after they were unknowingly fed pot brownies at a funeral they were attending. Reports indicate that the brownies were brought as a tribute to the deceased, who was allegedly a regular marijuana smoker.

While it may be true that none of the victims were permanently, physically harmed, the problem with pot brownies is that when consumed inadvertently, the experience can be extremely frightening. Marijuana advocates are likely to make light of these situations, but it’s easy to argue that these people are probably experienced with marijuana use and don’t understand the ramifications of being unknowingly drugged.

Even if marijuana is completely legalized in the United States, all of these issues will still be just as relevant: it is a felony offense to dupe someone into consuming a controlled substance. And if you’re on the other side of the stick – meaning you’re enduring the consequences of something you unknowingly consumed – then it’s likely that you’ll understand that in the right circumstances, pot brownies can ruin a person’s life.