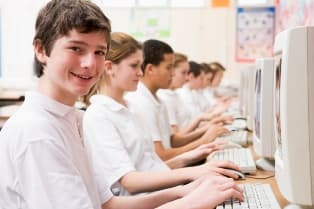 Drug abuse among teens and college students has a detrimental effect on academic performance. Young people are more susceptible to the short- and long-term cognitive effects of drug abuse while the social and emotional repercussions further increase risk factors for problems in school. It is important for parents and students to learn the risks of drug use and take action as soon as concerns are raised to avoid serious problems in school.

Drug Use and Brain Development

Advanced brain scan imaging has proven that the human brain is not fully developed at puberty as previously thought with maturation occurring as late as 24 years of age. “While each drug produces different physical effects, all abused substances share one thing in common: repeated use can alter the way the brain looks and functions.” (1) Common effects of drug use on the brain that impact academic learning includes difficulty concentrating, inability to process information and problems with working memory.

In 2007, “Almost 50 percent of 12th graders say that they’ve used drugs at least once in their lifetime, and 18 percent report using marijuana in the last month. Prescription drug abuse is high—with nearly 1 in 10 high school seniors reporting non-medical use of the prescription painkiller Vicodin in the past year.” (2)

Despite the fact that adolescents have under-developed brains lacking the impulse control of adults, education and parent involvement can reduce a young person’s risk for drug use and abuse. “Kids who learn a lot about the risks of drugs and alcohol from their parents are up to 50% less likely to use than those who do not.” (3)

Drug use among students with multiple risk factors is more likely to lead to addiction and affect their academic standing. Other risk factors could include depression, navigating major life changes or living in a familial or community setting where drug use is prevalent. The people students associate with and how they behave are often visible indicators of risk for trying drugs as well as possible signs of current drug use.

Teenagers that use drugs may become a part of anti-social groups who are less likely to value education, structure and social propriety. Theft, cutting school, cheating, dropping out and a general disregard for social norms are common behaviors bonding the members of these groups. The negative behaviors of this group mentality simultaneously create the desired sense of belonging while alienating oneself from the people who could help the most. Prolonged friendships like these (even without excessive drug use) increase the chance teens will continue to display socially deviant behavior long after peers have matured and moved on to fulfilling long-term academic and career goals.

There are many things you may notice if you or a loved one suffers from drug abuse. Everyone has his or her own tolerance for substances so there is no specific dose or frequency of use to use as a universal indicator of addiction or abuse. However, when drug use begins to have a negative effect on one’s relationships, career, education or safety, then it is time to get help. Below are some examples of behaviors that may indicate substance abuse.

Help is available 24 hours a day, 7 days per week. Stop wondering what you can do to help yourself or a loved one. Our drug addiction specialists will answer your questions and help you develop a plan. Don’t let drug abuse destroy another education. Make the call today while your thinking about it.