What Are the Differences between Xanax and Ativan? 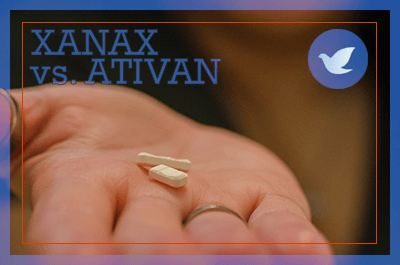 Prescription drug abuse is a growing problem in the United States. Benzodiazepines have been prescribed for decades, to treat anxiety, epilepsy, panic disorders, and similar conditions. They are widely prescribed, but also widely abused due to their intoxicating properties. Both Xanax and Ativan are medium-acting benzodiazepine medications, but they are prescribed to treat slightly different disorders, to different age groups, and in different amounts.

A clinical examination of 74 patients – 37 taking alprazolam and 37 taking lorazepam – found little difference in effectiveness between the two medications, especially in weeks two and four. At the first week, Ativan was found to be more effective, but the dose was higher. The choice to take either benzodiazepine medication is ultimately between a physician and patient, and it may take some time to figure out which one works best. During this time, it is very important for the physician to monitor their patient for any signs of abuse or addiction, as benzodiazepines can be very addictive.

Here are some further comparisons between the two medications, regarding dose and potential risk.

Xanax is the most famous brand name for alprazolam, which is a prescription benzodiazepine medication used to treat anxiety disorders. These disorders include generalized anxiety disorder, anxiety with depression, and panic disorders.

How Is Xanax Used?

Xanax should not be taken for more than two weeks, because the drug is very habit-forming, and the body can quickly develop a tolerance to it, so the prescription dose will not work as well. Benzodiazepines like Xanax can also lead to addiction due to how they interact with GABA receptors.

Xanax was originally approved by the Food and Drug Administration in 1981, and since then, recommended doses and methods of ingestion have changed to reduce its addictive potential. Currently, in both brand name and generic forms, alprazolam is available as a liquid, oral disintegrating tablets, and extended-release tablets.

Alprazolam has a half-life of 6-12 hours, with a 0.5 mg dose. The medication is approved for prescription in adults ages 18 or older.

In some rare cases, alprazolam can be prescribed for:

The Drug Abuse Warning Network (DAWN) Report noted that, in 2006, alprazolam alone was responsible for 8,007 emergency room visits due to intoxication and overdose. It is one of the most common benzodiazepines associated with emergency room treatment.

To enhance the effects of other central nervous system depressants, such as alcohol or opiates, sometimes people mix these drugs with benzodiazepines. When CNS depressants are mixed, they enhance each other’s effects. However, this can also rapidly lead to overdose and death.

Alprazolam intoxication appears much like alcohol intoxication. However, side effects from Xanax abuse can include:

Ativan is also a benzodiazepine medication. It is the brand name of the generic lorazepam, which is used to treat generalized anxiety disorder and anxiety stemming from depression. It is also sometimes prescribed to treat insomnia, epilepsy, irritable bowel syndrome, alcohol withdrawal syndrome, and nausea and vomiting associated with treatment for cancer.

How Is Ativan Used?

Like Xanax, it is not recommended that a person continue taking Ativan after 2-4 weeks of prescription treatment. The medication is intended for short-term treatment, unless a life-threatening condition, such as a seizure disorder, requires longer-term treatment. This is because Ativan, like Xanax, is very habit-forming, and the body can easily develop tolerance to it, so the size of the first dose will not work as well weeks later.

Ativan was originally approved by the FDA in 1977, and various versions of the drug, such as injectable formulas and different oral doses, have been approved since then. Lorazepam also has a half-life of 6-12 hours, but the size of the dose is 1-2 mg. Unlike Xanax, Ativan can be prescribed to people ages 12 and older.

In some rare cases, lorazepam is used for:

The DAWN Report notes that lorazepam intoxication and overdose are frequently found to be reasons for emergency room visits, but less frequently than with Xanax.

Get Help for Ativan or Xanax Abuse

Both Ativan and Xanax are widely prescribed to treat anxiety, insomnia, and panic disorders. However, they are also some of the most addictive and widely abused drugs in the world. While they do not often lead to overdose deaths on their own, many people who abuse benzodiazepines also concurrently abuse drugs like alcohol and narcotics. According to the Centers for Disease Control (CDC), benzodiazepine-related overdoses are on the rise: In a long-term survey from 1999 to 2013, there were 22,767 prescription-abuse related deaths, and 30 percent of those involved benzodiazepines.

It is very important for people struggling with benzodiazepine abuse, including abuse of Xanax or Ativan, to get help. Addiction treatment programs can work with clients to develop tapering regimens to safely detox from these medications. They also support clients’ improved mental health and stress management via individual and group therapy. These supports help clients learn about their addiction, cope with triggers after rehabilitation, and end their physical dependence on benzodiazepines.