N, N-dimethyltryptamine (DMT) is a molecule that is found naturally in many different plants and animals—including humans, although in minimal amounts.1 When this molecule is extracted from certain plants or produced synthetically in a lab, users can take it for an intense hallucinogenic effect.2

DMT is considered a Schedule I substance with no recognized medical uses and a high potential for abuse. However, with approval of both the Drug Enforcement Administration (DEA) and Food and Drug Administration (FDA) it may be used in research.2

Read on to learn more about this powerful hallucinogen.

How is DMT Abused?

DMT use is a part of many rituals and practices that likely date back many hundreds of years. The process of making and consuming ayahuasca—a tea that contains DMT—is still common, predominantly in South America.2

Most illicitly manufactured DMT is either derived from a plant or chemically synthesized in laboratories. It’s usually found in the form of a fine crystalline powder that can be:2 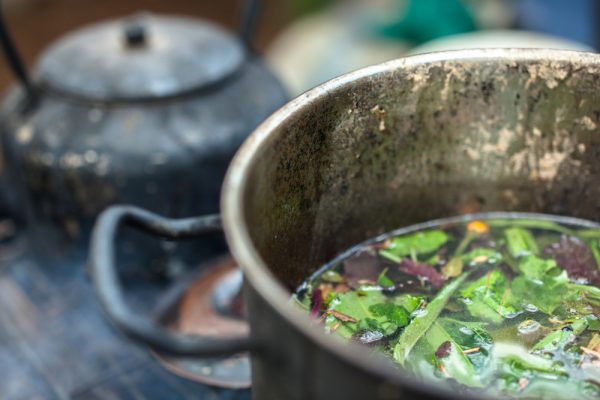 DMT is metabolized quickly, making it a popular drug among people that desire the intense psychoactive effects of other hallucinogens for a shorter period of time. Swallowing DMT by itself does not allow much of the substance to enter the bloodstream, and therefore produces little effect.2

For this reason, many people choose to smoke or snort the powder, which causes intense effects to be felt rapidly, and lasts between 15-60 minutes.2

However, when DMT is combined with certain alkaloids and consumed orally—as it is in ayahuasca—the experience sets in around 1 hour, peaks at 90 minutes, and subsides around 4 hours after consumption.1

DMT administered through intravenous injection (shooting up) is felt instantly and lasts 30-45 minutes.2

Physical and Psychological Effects of DMT

DMT produces effects comparable to other classic hallucinogens, including alterations in sensation, perception, emotion, sense of self, and attribution of meaning.4 Besides the hallucinogenic effects, there are also uncomfortable and sometimes dangerous side effects that may accompany DMT use.

Reports of overdose on DMT or ayahuasca are rare. However, there have been hundreds of hospital visits associated with ayahuasca use. Most people who visited the hospital as a result of ayahuasca exposure experience one or more of the following acute symptoms:6

The following rare but exceedingly dangerous side effects have also been observed in several patients following ayahuasca exposure:6

Acute exposure to ayahuasca is often treated by administering benzodiazepines. In rare cases, doctors have had to perform endotracheal intubation (using a tube to expand the windpipe) on patients.6

How Long Does DMT Stay in Your System?

DMT is metabolized so quickly that it is difficult to detect through blood or urine. Even when DMT is injected, researchers suspect that only 1.8% of the dose is actually present in the bloodstream at once.7

The Substance Abuse and Mental Health Services Administration (SAMHSA)-5 drug test does not detect DMT, nor do most expanded versions of drug tests.8

It’s currently unknown whether DMT is addictive or whether long-term problems can arise from repeated abuse. Interestingly, people do not seem to develop a tolerance to DMT the way they would with most hallucinogens or other drugs.5

Currently, there is a debate on whether DMT and other psychedelic substances should be researched as a means of treating psychological problems such as anxiety, post-traumatic stress disorder, depression, schizophrenia, and even substance use disorder. So far, there is not enough data collected to confirm that DMT has clinical therapeutic uses.1

As with all illicitly manufactured or distributed substances, people who choose to use them face the risk of contamination with unknown and potentially fatal chemicals.

James Regan is a content expert at American Addiction Centers and Recovery First. He earned his bachelor’s degree from California State University San Marcos in English. James has written and edited content in digital media for several years, and nowRead More

Hallucinogens
Prefer getting help via text?
We're available 24/7 via text message. Signup below for access to our team when its convenient for you!
and many more...
✕
Instantly Check Your Insurance Coverage
Your information is safe & secure
At Recovery First, we accept most types of private (non-government) insurance and offer a variety of payment options.
You can quickly and privately check your insurance benefits to see if you're covered for addiction treatment services. We’ll be able to tell you if your provider is in network with Recovery First Treatment Center and all American Addiction Centers locations.
This means your treatment may be FREE1 depending on your policy, copay, and deductible.
Next Steps & ResourcesFind recovery resources and treatment info.