How Long Does Valium Stay in Your System?

Valium is one of the most famous brand names for the benzodiazepine medication diazepam. This substance was originally synthesized in the 1960s, and it has been hailed as a groundbreaking medication to treat anxiety, seizures, alcohol withdrawal, muscle convulsions, and other issues. However, like other benzodiazepines that followed in Valium’s wake, this substance can be addictive due to its action on brain chemistry. Valium blocks the uptake of the gamma-aminobutyric acid (GABA) neurotransmitter, which induces a sensation of relaxation and, in large doses, euphoria. It can also stimulate the brain’s reward system, releasing dopamine, which increases the potential of this medication to become addictive for some people.

How Potent Is Valium? 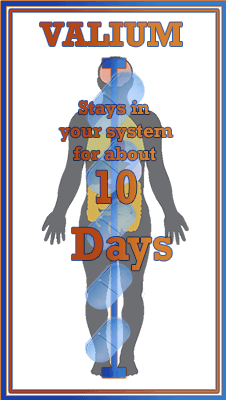 When a person becomes addicted to Valium, they may attempt to stop taking the substance to try to overcome the addiction. In order to do this successfully, it is important to get help from a medical professional. Attempting an at-home detox from any benzodiazepine can be dangerous and even life-threatening; medical supervision is always required. It is also important to understand how long Valium remains in the body, which can help clarify the withdrawal process.

Diazepam is a long-acting benzodiazepine, meaning that it continues to affect the brain for a long period of time. Because of this, prescription doses for Valium or other forms of diazepam tend to be very small – around 2 mg per dose, which can be cut in half depending on the severity of the condition the prescription will treat. However, when a person struggles with addiction to Valium, they are more likely to begin to increase their dose as their body begins to develop a tolerance to the medication. This means there will be more diazepam in the blood and stored in body fat, so it can take even longer to eliminate the substance from the body.

How Long Does Valium Stay in the Body?

Valium has a relatively long half-life. Active metabolites may remain in the body for as long as 20-100 hours after use. Many benzodiazepines have a half-life of several hours, up to one day; although this means that withdrawal takes less time, it also means that the onset of withdrawal may begin sooner. Valium’s long half-life means it is often used as part of the tapering process from other benzodiazepines, like Xanax.

How Is Valium Metabolized?

As the body metabolizes diazepam, the medication is broken down into other metabolites, including:

Valium’s metabolites can be more difficult to eliminate from the body, depending on the individual’s age. Because liver function reduces as a person gets older, elderly adults may have a more difficult time processing and eliminating diazepam. Liver disease from hepatitis, alcohol dependence, or other conditions can also make the elimination of Valium more difficult. Since Valium is one of the benzodiazepines prescribed to people trying to overcome alcohol addiction to ease withdrawal symptoms, it is important to understand whether alcohol dependence has led to liver damage. When the drugs do not easily leave the body, this can increase the risk of falls, confusion, memory loss, and other side effects.

Why Is It Dangerous to Keep Taking Valium?

Medications that remain in the body for a long time increase the risk of overdose. As a person becomes addicted to a substance like Valium, they will want to take more of the drug to increase the euphoric effects. Symptoms of diazepam overdose include:

Since Valium remains in the body for a long time, attempting to detox from this substance can lead to protracted withdrawal symptoms. Symptoms include:

These symptoms can be physically dangerous, so it is very important to get medical help immediately.

Get Help for Valium Addiction

People who receive a prescription for Valium or another benzodiazepine should discuss the prescription carefully with their physician. Although these medications provide therapeutic value when taken as prescribed, they can be very addictive and have dangerous side effects.

For those who struggle with addiction to Valium, trying to end that addiction alone will be difficult, and withdrawal could be life-threatening. Comprehensive rehabilitation programs can ensure a safe and comfortable withdrawal from Valium and a full continuum of care that can ensure the best chances at prolonged recovery.

benzodiazepinesdetoxsedativesvaliumwithdrawal
Help is a Phone Call Away
Please don't suffer with substance abuse thinking no one cares. We care and want to help you get back to the life you deserve.
Are you covered for addiction treatment? Find your insurance.
and many more...
✕
Instantly Check Your Insurance Coverage
Your information is safe & secure
At Recovery First, we accept most types of private (non-government) insurance and offer a variety of payment options.
You can quickly and privately check your insurance benefits to see if you're covered for addiction treatment services. We’ll be able to tell you if your provider is in network with Recovery First Treatment Center and all American Addiction Centers locations.
This means your treatment may be FREE1 depending on your policy, copay, and deductible.
Get the Info & Help You NeedWe're open across the US. Learn about your options.