According to the 2014 National Survey on Drug Use and Health (NSDUH), almost 2 million American adults (who were at least 12 years old) were considered to be current abusers of a tranquilizer drug. One of the more common tranquilizers to be diverted and found on the illicit market, Valium is a anxiolytic benzodiazepine drug that is only legally available through a prescription, the Drug Enforcement Administration (DEA) publishes. Valium, or in its generic form diazepam, is prescribed to treat anxiety and panic disorders, and the US Food and Drug Administration (FDA) does not recommend taking it for longer than a period of four months due to the potential for developing a dependence on the it.

Valium acts on levels of gamma-aminobutyric acid (GABA) and dopamine in the brain. Both are chemical messengers. GABA works on the stress response, acting like a natural tranquilizer to slow down some of the functions of the central nervous system like heart rate, body temperature, and blood pressure as well as minimizing anxiety and stress. Dopamine is a pleasure-inducing neurotransmitter that elevates mood. Valium disrupts the natural production of both of these chemicals in the brain, and over time, these changes can become set. This can cause a dependence to form wherein the individual’s brain relies on Valium in order to feel balanced.

When Valium is removed or leaves the system, withdrawal symptoms may start. Benzodiazepine withdrawal can be significant, and side effects may even become life-threatening without proper treatment and care.

Valium has a half-life of about an average of 12 hours and may remain active in a person’s system for up to a full day, the National Highway Traffic Safety Association (NHTSA) publishes. This means that withdrawal may start 12-24 hours or so after the last dose of Valium.

When Valium is removed and is no longer suppressing functions of the central nervous system, a kind of rebound may occur in the first few days. Individuals may feel a resurgence of anxiety and insomnia that the drug may have been used to. Sleep disturbances, including nightmares or unusually vivid dreams, may also occur. Mood swings and irritability, restlessness, and fatigue are all common during early benzodiazepine withdrawal as well. The early stage of Valium withdrawal likely lasts between a day and four days. Symptoms may be mild to start, increasing in intensity as time goes on.

More serious complications can arise as well, such as hallucinations, depersonalization, derealization, numbness or tingling of arms and legs, heightened sensations and sensitivities to sound and/or light, psychosis, delirium, or even life-threatening convulsions or seizures. The Drug Abuse Warning Network(DAWN) reports that in 2011, over 15,000 Americans sought emergency department (ED) treatment for a negative reaction to abuse of diazepam.

Valium withdrawal can vary in its severity and duration from person to person. Environmental factors like a person’s support system, exposure to stress, or prior trauma may play a role. Someone surrounded by high levels of stress consistently may have more intense withdrawal symptoms, for instance.

Biological and genetic influences can impact a person’s level of dependency on Valium and their likelihood of becoming addicted to the drug. Genetics are thought to account for about half of a person’s risk for addiction, the Genetic Literacy Project publishes. Age at first use may also be a factor, as Valium can make changes to parts of the brain that are not fully developed until a person is in their mid-20s, thus possibly increasing the risk for addiction. The method in which a person uses Valium (e.g., injecting it rather than swallowing it) may also impact drug dependence, as may the length of time using it and the amount used each time. 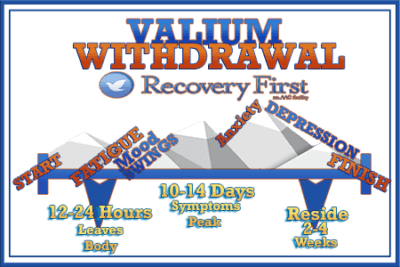 While most of the physical side effects of withdrawal may taper off after a week or two, some of the psychological symptoms may continue. Anxiety, depression, difficulties sleeping, and suicidal thoughts may persist until treatment is obtained. Since Valium is often used to dispel anxiety and lower stress, these feelings may be overwhelming during withdrawal.

The Substance Abuse and Mental Health Services Administration (SAMHSA) publishes that around 8 million people in the United States who were at least 18 years old in 2014 battled co-occurring mental health and substance use disorders. When two disorders, like a Valium use disorder and an anxiety disorder, co-occur, integrated treatment that often involves both medication and therapeutic methods is generally recommended. An underlying medical or mental health issue may increase the intensity or duration of withdrawal as well.

Drug cravings may also be significant during Valium withdrawal, and relapse is possible. The danger with relapse after stopping Valium use is the increased risk for overdose. An individual who stops Valium after developing a dependence on it may return to using it at levels that they used before, and after a period of abstinence, tolerance can drop. This means that returning to using it at previous levels can quickly overwhelm the system and lead to a toxic overdose. In 2014, the National Institute on Drug Abuse (NIDA) reports that close to 8,000 people died from a benzodiazepine overdose that year.

Polydrug abuse is also common with Valium abuse and may increase the risk for overdose and complicate withdrawal as well. Alcohol and opioids pose a particularly high risk when mixed with Valium, as these substances are also central nervous system depressants. When combined, they may lower respiration, heart rate, body temperature, and blood pressure to dangerously low levels.

What to Expect during Detox

A period of detoxification allows Valium to safely clear from the body. In many instances, a supervised, medical detox is the optimal way to manage withdrawal symptoms and keep a person safe. Benzodiazepine detox and withdrawal management may take several days to weeks, although it may be a little longer or shorter depending on a person’s individual circumstances.

If you are looking for a medical detox center to help you or a loved one start the journey to recovery, we encourage you to explore the many amenities that an American Addiction Centers facility provides. Call for more information. Recovery First may be a good option if you are interested in a medical detox center near Miami, Florida. Call us today to learn more.

Valium is considered a long-acting benzodiazepine, and because of the potential severity of withdrawal symptoms, it is not recommended to stop taking it suddenly. Instead, during medical detox, the World Health Organization (WHO) recommends slowly lowering, or tapering down, the dosage over a period of 4-7 days in order to safely remove it from the body while minimizing withdrawal. Valium can be weaned off in a controlled fashion, and under medical supervision, in order to reduce the intensity of withdrawal symptoms. People should never attempt to taper off Valium on their own without medical supervision.

While NIDA publishes that there are currently no approved FDA-approved medications for benzodiazepine dependence, medications may be beneficial during medical detox to address particular withdrawal symptoms. Clonidine, which is a blood pressure medication, may be used off-label to treat some of the autonomic nervous system responses during benzodiazepine withdrawal, for example. Antidepressants, nonbenzodiazepine sleep aids, gastrointestinal medications, and other pharmacological tools may be useful during Valium detox as well.

The main goal of detox is to help a person reach a healthy and stable physical level, so they can then work toward overall recovery by entering into a comprehensive substance abuse treatment program. Therapy and additional treatment should always follow Valium detox.

benzodiazepinesdetoxsedativesvaliumwithdrawal
Prefer getting help via text?
We're available 24/7 via text message. Signup below for access to our team when its convenient for you!
and many more...
✕
Instantly Check Your Insurance Coverage
Your information is safe & secure
At Recovery First, we accept most types of private (non-government) insurance and offer a variety of payment options.
You can quickly and privately check your insurance benefits to see if you're covered for addiction treatment services. We’ll be able to tell you if your provider is in network with Recovery First Treatment Center and all American Addiction Centers locations.
This means your treatment may be FREE1 depending on your policy, copay, and deductible.
Get the Info & Help You NeedLearn about the options available at our South Florida addiction treatment center.