How to Identify Cocaine Abuse 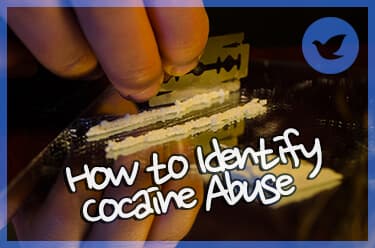 Cocaine is a potent stimulant drug derived from the coca plant, which grows in South America. The Drug Enforcement Administration (DEA) lists it as Schedule II because the substance has some use as a local anesthetic for ear, nose, and throat surgeries. However, it is rarely prescribed, and it is more often found illicitly for recreational abuse.

The most familiar form of cocaine is a white powder, which is snorted or smoked. This version of the drug may be adulterated with dozens of additives, including veterinary deworming agents, powdered caffeine, sugar or flour, amphetamines, or fentanyl. Crack cocaine mixes baking soda or ammonia with cocaine to create crystal-like rocks, which are smoked.

People who struggle with cocaine addiction experience a surge of dopamine and other neurotransmitters when they ingest the substance. When they do not ingest cocaine, they are more likely to experience low mood, extreme sleepiness, physical fatigue, and cravings. However, abusing cocaine can lead to serious problems, both acute and chronic. To help someone struggling with cocaine addiction, it is important to understand the symptoms of the drug and of addiction. About 14 percent of US adults have tried cocaine at least once in their lifetime.

Physical and Mental Effects from Cocaine

Since cocaine is a stimulant, a person who is high on this drug will exhibit emotional and behavioral changes including:

The mental and emotional stimulation from cocaine begins within seconds of snorting or smoking it, and it may last between 10 and 30 minutes. The comedown, which may include depression, fatigue, and sluggishness, can cause the person to immediately take more. Cocaine binges can cause serious problems, including overdose.

Outward symptoms of current cocaine abuse may include:

There are several serious risks associated with cocaine abuse, even when a person takes one dose of the drug. Some of these side effects include:

People who abuse cocaine for a long time are more likely to develop cardiovascular damage and chronic health issues like:

People who snort powdered cocaine are at risk of developing septal and palatal perforations – a hole in the lining between the nostrils or a hole in the roof of the mouth. This occurs because cocaine damages blood flow to these regions, especially when it comes in direct contact with these sensitive mucosal tissues. Septal perforation is common among people who snort cocaine; as the tissues lining the cartilage die, the cartilage is exposed, which can cause further damage until it degrades. Very long-term, high-volume abuse of cocaine can cause the same kind of damage to the upper palate.

Those who abuse cocaine for a long time, either snorting or smoking it, are at greater risk of lung infections, including pneumonia and tuberculosis. Smoking this drug can also increase the risk of lung cancer.

Cocaine abuse, especially cocaine binges, has been associated with rhabdomyolysis. This is a painful and life-threatening process in which skeletal muscles begin to break down, and this floods the bloodstream with toxins; the kidneys attempt to filter out the toxins but become overwhelmed, which leads to kidney failure.

People who struggle with cocaine addiction are more likely to experience withdrawal symptoms when they attempt to stop taking the drug or are unable to obtain a supply of the drug. Symptoms of withdrawal from cocaine include:

While the withdrawal symptoms from cocaine are rarely dangerous or life-threatening, they can be uncomfortable. For people who try to quit cocaine cold turkey, the discomfort may lead to relapse, which can induce overdose because the person takes too much cocaine.

Other Signs of Addiction

Addiction is a primary disease of the brain’s reward system, which is reinforced when the person ingests an intoxicating substance or performs a specific action (like gambling addiction, for example). Behavioral changes begin when the person seeks drugs, like cocaine, to stimulate neurotransmitters and the brain’s reward system. Changes in behavior associated with addiction include:

Cocaine is an extremely risky drug that can greatly damage health and relationships. People who struggle with cocaine addiction need help to overcome this problem. While there are no medications approved by the Food and Drug Administration (FDA) to ease cocaine withdrawal symptoms, any discomfort can be managed with over-the-counter medicines during detox, which should be overseen by medical professionals in an appropriate setting.

Once a person detoxes, engaging in a comprehensive rehabilitation program that provides individual and group therapy to treat cocaine addiction is the best way to avoid relapse. Behavioral interventions like Contingency Management and Cognitive Behavioral Therapy have shown the best results among people who are working to end cocaine addiction. Therapeutic communities like sober living homes can provide further reinforcement to maintain sobriety after rehabilitation.