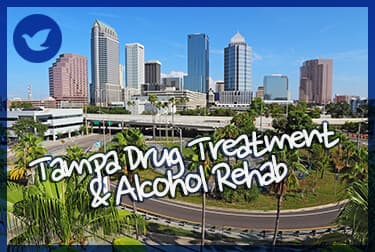 Tampa, Florida, is one of the largest cities in the Sunshine State. The population is 369,028 as of 2016, and the median age is about 35 years old – a little younger than many cities in Florida. Nestled in Tampa Bay on the Gulf Coast, Tampa is also one of the largest metro areas in Hillsborough County. With so many people, Tampa has thousands of residents who struggle with addiction and substance abuse.

The metro area of Tampa, Clearwater, and St. Petersburg was measured for rates of substance abuse among people ages 12 and older by the National Survey of Drug Use and Health (NSDUH) between 2005 and 2010.. Survey results for that time period found:

Between 2014 and 2015, there was an 18 percent increase in the number of overdose deaths involving prescription drugs of some kind. In 2014, 304 people died from prescription drugs; in 2015, that number rose to 360. About one-third of those deaths appear to be accidental in both years.

According to the NSDUH Metro Brief for this area, 326,000 people in Tampa, Fort Lauderdale, and Clearwater ages 12 and older abused at least one illicit drug in the year before the survey. Marijuana was the most popular drug of abuse, at 10 percent of those reporting substance abuse; prescription painkiller abuse represented 4.6 percent of illicit substance abuse. Of those who abused any illicit drug, 188,000 people were classified as having a substance use disorder. 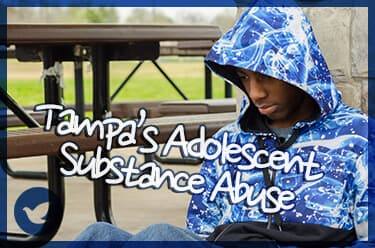 Alcohol and Cigarettes in Tampa, FL

In the Tampa-Ft. Lauderdale-Clearwater MSA, about 24.5 percent of residents ages 12 and older smoked cigarettes while 23.2 percent experienced at least one episode of binge drinking. Estimates from 2016 show that Hillsborough County represented 33.4 percent of driving deaths involving alcohol; 19.8 percent of problem drinking in Florida; and 16.9 percent of adults who smoked.

The Florida Department of Motor Vehicles (DMV) reported that Hillsborough County represented most of the state’s 2010 drunk driving convictions, at 3,256 total. The Hillsborough County Anti-Drug Coalition (HCADA) found in 2011, the county ranked number one in Florida for alcohol-related fatalities. Although DUI arrests decreased that year, there were still more in Hillsborough than anywhere else in the state.

Hillsborough County has higher rates of smoking and problem drinking than the rest of the state, although rates began to decline in 2009. In 2010:

These rates were all higher than Florida state averages.

The Opioid Abuse Epidemic in Tampa

Prescription painkillers were still a leading cause of overdose deaths in 2015, according to Florida’s medical examiners.

People in Tampa appear to be more likely to abuse prescription painkillers than heroin, even if heroin is cheaper or easier to get. In 2015, the city experienced 35 overdose deaths involving heroin; none of those were from heroin alone, although 33 were caused by heroin with other drugs present in the body. Most people in Tampa who struggle with heroin addiction and overdose are between 35 and 50. In 2015, 13 of the overdose deaths involved this age group.

Fentanyl has become a large problem among people struggling with opioid abuse across the country; the drug is 50-100 times more potent than morphine, so it is also stronger than heroin. Unfortunately, it has been found mixed with heroin, or sold in place of heroin, in states all over the US. Surprisingly, Tampa did not experience many fentanyl overdose deaths in 2015 compared to other cities in Florida. 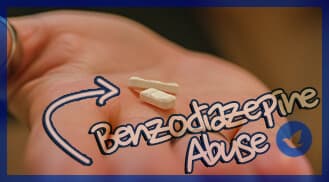 People who struggle with benzodiazepine abuse tend to mix these CNS depressants with other drugs, including alcohol and opioids. This increases the high associated with these drugs, but it also greatly increases the risk of overdose. In Tampa, this pattern represents an urgent problem and has led to hundreds of deaths in the past several years.

Medical examiners report that alprazolam was involved in 127 deaths in 2015.

I WANT TO LEARN MORE ABOUT:

Diazepam, or Valium, is also a problematic benzodiazepine in Tampa. Thirty people died with diazepine in their body, and 16 of those deaths were caused by diazepam. All the overdoses involved other drugs; diazepam was never the only drug present at the time of death

People between the ages of 35 and 50, and people over the age of 50, appear to struggle with diazepam equally; seven people in both age groups died from an overdose involving diazepam, with other drugs present.

Cocaine Addiction and Abuse in Tampa

Although many cities in Florida experience worse rates of cocaine abuse, including polydrug abuse involving cocaine, Tampa does have a large problem with this dangerous stimulant. In 2015, 84 people died from a drug overdose with cocaine involved; of those, 28 died because of cocaine, 21 of which involved cocaine by itself. Cocaine is more often involved in a pattern of polydrug abuse, as 63 overdose deaths involved cocaine in combination with other drugs.

Crime, Mental Health, and Laws around Drugs in Tampa 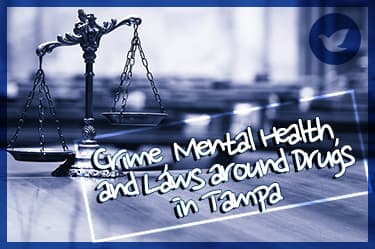 Florida has some of the toughest DUI laws in the US and little leniency for marijuana, although many states are passing medical or recreational legislation to control this substance. Like most of the US, Florida has zero-tolerance laws around underage drinking and driving and a possible fine of up to $9,000 for adult drunk driving. Possession of marijuana can result in up to one year in jail and a fine of $1,000.

Because Florida began the drug court movement in the 1980s, it is possible to have these penalties reduced or removed by entering a treatment program through this court. This may include education at a Tampa Traffic Law & Substance Abuse Education Course School.

DOH for the state of Florida is a great resource for detox and rehabilitation options in Tampa or other locations in the state. A program administered with state and federal healthcare dollars is the Substance Abuse and Mental Health (SAMH) program through the Florida Department of Children and Families (DCF), which offers a recovery residence, referrals, and credentials for treatment programs. In addition to the SAMH program, DCF keeps a list of treatment providers all across the state, categorized by city; as they are listed in alphabetical order, Tampa’s treatment listings begin on page 78 of this 89-page document.

Volunteers of America (VOA) has support group meetings, detox, residential treatment, and intensive outpatient treatment available to Tampa residents. Although it is religious-based, this treatment is free or low-cost for those who desperately need help.

The Substance Abuse and Mental Health Services Administration (SAMHSA) has a simple online search tool for behavioral health treatment, which includes detox, inpatient and outpatient rehabilitation, programs that use medication assistance like buprenorphine, and more.

local
Prefer getting help via text?
We're available 24/7 via text message. Signup below for access to our team when its convenient for you!
and many more...
Ready for Recovery?See what brings people to Recovery First for help.