Millions of people who have struggled with substance use disorders are currently living fulfilling lives in recovery.

With the right combination of treatment and therapy, Recovery First Treatment Center can help you work towards a life in recovery.

Read on to learn about substance abuse in the Pensacola, FL region and the resources nearby for addiction treatment. 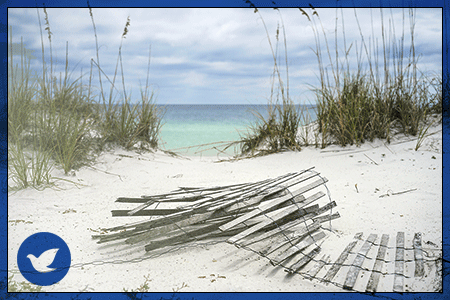 Pensacola is a city in Florida’s Panhandle, the northwestern Escambia County area along the Gulf of Mexico. It is close to Florida’s border with Alabama. As a tourist destination, Pensacola is renowned for beautiful white sand beaches, excellent food, and its rich history as one of the first colonial cities, founded in 1559.

As a major city, the area is home to several military families, thanks to the Naval Air Station, and to the famous Blue Angels aerobatics team. The area is on the smaller side for cities, with close to 52,000 people living in the urban and suburban areas. However, like most other cities in the US, Pensacola is no stranger to substance abuse problems. 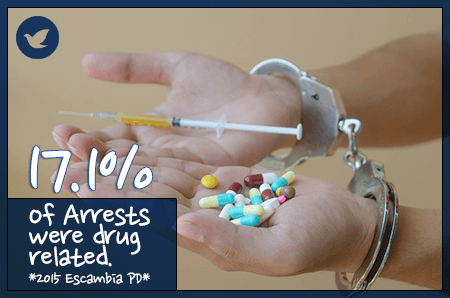 Like the rest of Florida, alcohol abuse, especially through binge drinking and heavy drinking, is prominent in Escambia County. Overall, 15 percent of adults engage in this problematic behavior, which can cause esophageal, stomach, and liver cancer; cirrhosis; and memory trouble, among many other chronic health problems.

While synthetic cathinones like flakka are not a huge reported problem in the Pensacola area, and are more prevalent in southern Florida, Escambia County officers report finding labs that produce bath salts and spice – a synthetic cathinone and cannabinoid, respectively – in northwestern Florida.

Pensacola’s Youth Are Abusing Substances Less than in Previous Years

Alcohol is the most commonly abused substance among Escambia’s middle and high school students. Not only does it have the highest lifetime rate, but over 19 percent of students surveyed in 2014 reported they had abused alcohol in the past month. Marijuana was the second highest, with 11.3 percent of students admitting to past-month abuse.

Although these rates are too high, the county’s students are abusing alcohol and drugs less overall since 2004. In that year, about 20 percent of middle school and almost 50 percent of high school students reported past-month alcohol consumption. In the past decade, those percentages have dropped considerably, and they are even slightly less than the Florida state average.

Marijuana abuse among middle and high school students has followed a similar trend. In 2004, about 7 percent of middle schoolers, and over 20 percent of high schoolers, abused marijuana in the past month; by 2014, those percentages had dropped lower than the Florida state average. Abuse of inhalants, over-the-counter drugs, depressants, and prescription drugs has also declined among students in Escambia County since 2004.

Escambia County worked with task forces across the state to eliminate pill mills, starting in 2010. These facilities were considered too liberal with prescribing practices, especially around opioid drugs, contributing to a steep rise in addiction, overdose, and death. However, overdoses are still on the rise across the county. Both 2016 and 2017 were deadly years for Pensacola residents, as heroin deaths hit an all-time high twice.

The 2015 Florida Medical Examiner’s Report maintains an annual record of drugs involved in death, including ethanol (alcohol), amphetamines, benzodiazepines, inhalants, hallucinogens, opioids, and “other” (cocaine, ketamine, synthetic cannabinoids, and synthetic cathinones). The report found that, compared to the first half of 2014, all drug-related deaths increased 13.9 percent; 2,548 people died with one or more prescription drug in their system, and of those, 1,155 individuals were found to have a prescription drug overdose as the cause of their death. These drugs continue to be a greater cause of overdose death than illicit drugs in Florida in general.

The five most frequently found drugs were:

However, opioid drugs including heroin, fentanyl, methadone, and morphine, as well as cocaine, were found to cause death in half of the cases where the drugs were found in the deceased’s body. Occurrence of heroin in overdose deaths increased 107.9 percent from 2014, and fentanyl occurrences increased 97.5 percent. Deaths caused by fentanyl increased 105 percent.

Escambia County is part of the FME’s District 1, which covers all the northwestern Panhandle. The FME’s primary area in District 1 is, of course, Pensacola, which is the largest city in the area. In District 1, drugs involved in deaths included the following:

If you or a loved one is struggling with substance abuse in the Pensacola, Florida area, you are not alone. There are many options for addiction treatment near you, including medical detox, inpatient rehab options, and outpatient rehab services. At Recovery First, we'll connect you with local alumni from our program to support you in your long-term recovery journey.

The Marchman Act, or the Florida Substance Abuse Impairment Act, governs both voluntary and involuntary commitment to treatment programs to overcome addiction. The law covers placing an individual in a treatment program as part of their incarceration or in a hospital if a law enforcement officer believes their behavior puts the individual and/or others at risk. While there is debate about the efficacy of this law in Florida, the underlying intent is to get people struggling with dangerous, addictive drugs the treatment they need to overcome substance abuse.

Although adolescents and young adults are abusing substances less than middle-aged and older adults, thanks to prevention efforts and education programs, residents in Pensacola still need access to addiction treatment. The Florida Association of Recovery Residences (FARR) and the Florida Department of Children and Families (DCF) maintain high standards for recovery programs, requiring specific safety and efficacy standards to be met before a rehabilitation program can be certified. The organizations compile a list of certified recovery programs, which can be found on the DCF website.

The University of West Florida endeavors to maintain student safety and health by promising a drug-free campus. For students attending this Pensacola-based school, the Student Health Center offers referrals to counseling and rehabilitation programs to help students overcome addiction. Employees of the school who may struggle with substance abuse problems can get help through the university’s Employee Assistance Program (EAP). 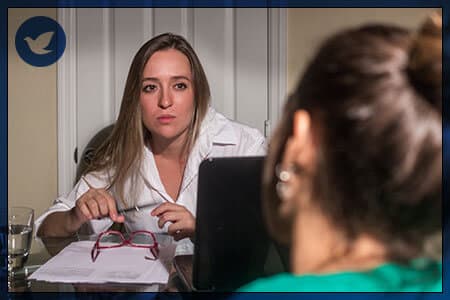 The Substance Abuse and Mental Health Services Administration (SAMHSA) provides an online treatment finder that can narrow down options for detox and rehabilitation based on area. The government organization also offers a hotline to call if a person is in crisis and needs help finding services immediately.

Psychology Today keeps lengthy, up-to-date lists of behavioral treatment providersbased on location. For Pensacola, drug and alcohol treatment can be narrowed down by detox, rehabilitation, inpatient, outpatient, length of stay, and many other factors.

With several navy families in Pensacola, the Office of Veterans Affairs (VA) can help residents of Escambia County manage their veterans’ benefits if they belonged to the military. The VA offers several mental and behavioral health programs, which cover substance abuse and addiction treatment.

The Florida Alcohol and Drug Abuse Association (FADAA) keeps resources on their website to help those who worry about substance abuse signs in their loved ones or who are seeking help overcoming substance abuse.

Take our substance abuse self-assessment quiz and take the first step towards recovery. Our quiz is quick and confidential.
Our Stats
Learn More
7,000+
Patients Treated
15
Registered Nurses
2
Certified Medical Directors
5
Licensed Mental Health Counselors
What Makes Us Unique
Industry Accredited, Exceptional Care
We hold ourselves to the highest standards, and it’s apparent in our A+ rating with the Better Business Bureau and the accreditations and memberships we hold.
We’ve Supported Thousands With Their Recovery
Rehabs.com
I came to this facility for alcohol dependence and it was such a great experience. The therapists and each and every staff member were absolutely incredible. I was treated with respect and treatment was tailored to my individual needs. I would highly recommend to anyone seeking treatment for substance abuse. If you need help this is the place to go.
Our Promise to You
We guarantee you’ll stay clean and sober if you successfully complete our 90-day program, or you can return for a complimentary 30 days of treatment.
*Terms and conditions may apply, and results may vary.

You aren't alone. You deserve to get help.

When contemplating the costs of addiction treatment for yourself, child, or loved one, consider the costs, or consequences, of “things as they are now.” What would happen if the substance abuse or addiction continued? Contact Recovery First, and we will help you or your loved one get the treatment needed to stop the dangerous, progressive effects of addiction.
Ready for Recovery?See what brings people to Recovery First for help.