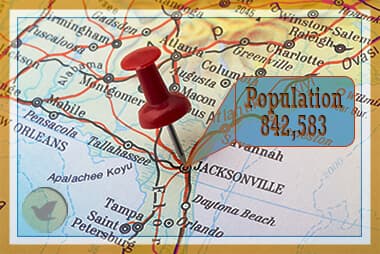 Jacksonville is the most populous city in Florida and the biggest city by area (over 840 square miles) in the entire United States.1 Familiar with drug abuse and mental health issues, Jacksonville residents are inside Duval County, which is a part of one of the nation’s 28 High Intensity Drug Trafficking Areas (HIDTAs), indicating a high prevalence of drug smuggling and/or local manufacturing at great cost to the local community.2 Jacksonville is part of the North Florida HIDTA, which also encompasses Columbia, Clay, Flagler, St. John’s, Putnam, Nassau, Marion, Alachua, and Baker Counties in addition to Duval County.3

Located on the eastern seaboard of the United States, Jacksonville is a sprawling metropolis and a vital port city, receiving tons of maritime cargo daily, as well as home to a busy international airport and several well-developed interstates and transportation options in and out of the city and state. In Florida, around 8 percent of the state residents reported past-month use of an illicit drug at the time of a national survey, which is similar to the national average.4

Drug trafficking organizations (DTOs) have long been operating in the Northern Florida HIDTA region, bringing in marijuana, methamphetamine, cocaine, and heroin from Mexico, Cuba, and Columbia.5 In 2008, the U.S. Department of Justice (DOJ) considered cocaine to be the biggest drug problem in Northern Florida.6

In 2010, there was a shift, and prescription drug diversion became the region’s biggest drug threat.7 Law enforcement and government agencies recognized the threat the nonmedical use, abuse, and trafficking of pharmaceuticals posed to Florida and enacted several new methods for controlling and regulating this growing epidemic. In 2010, new regulations forced doctors to register prescriptions, and law enforcement agencies cracked down on illegal pill mill operations, shutting down 250 pain clinics by 2013 and seizing illegally diverted drugs.8 Perhaps in answer, Florida saw prescription drug overdose deaths drop 23 percent from 2010 to 2012, the largest and most sustained drop in prescription overdose fatalities of any other state.9 As a possible consequence, however, cocaine and heroin overdoses began rising.10

Crime often comes with drug use, and crime rates in Jacksonville and Duval County are particularly high, ranking fourth in the state of Florida.12 Crimes directly dubbed drug crimes numbered 1,816 for the fiscal year 2013-2014, and over 70 percent of new drug commitments in 2014 were for the sale, manufacture, or purchase of drugs.13 This does not account for the number of crimes that may have been committed under the influence of drugs or in order to obtain drugs. Drugs are commonly involved in violent crimes and property crimes, and 80 percent of prison inmates are thought to abuse alcohol or drugs.14 Fortunately, drug crimes were down 7.3 percent overall from 2013 to 2014 in Duval County.15

The Opioid Abuse Epidemic in Jacksonville 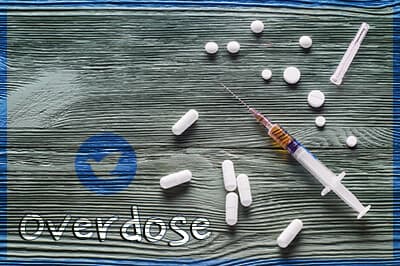 In 2014, there were 78 reported oxycodone overdose deaths; the drug was the cause of death in 30 of those instances, although it was the sole drug found in only eight of the overdoses. In the remaining overdose deaths, oxycodone was found in combination with other intoxicating substances. Hydrocodone contributed to 87 overdosed deaths in Jacksonville, of which it caused 34; in 13 cases, hydrocodone drugs were the only substances present to cause death.

Methadone was found in 38 overdose deaths. For 22 of those cases, methadone caused the overdose, but it was the only drug present in only two cases.

As the problem with opioids shifts from prescription drugs to heroin, morphine, and other illicit opioids, more people are contracting illnesses from sharing needles. The website AIDSVu maintains statistics on the prevalence of HIV and AIDS across the US and how people struggling with this viral infection contracted it. In 2014, 3.3 percent of men and 10 percent of women who contracted the virus caught it through injection drug use.

A Serious Fentanyl Problem in Jacksonville 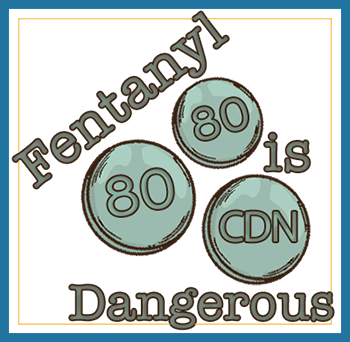 Fentanyl is gaining popularity on the black market, both as an adulterant in various drugs and as a heroin replacement. It is often sold to those who do not know they are buying a drug that is around 100 times more potent than morphine. In 2014, fentanyl was involved in 33 overdose deaths, of which it caused 31, although it was the only drug present in four deaths. This suggests that fentanyl is often mixed with other drugs, both on purpose or by accident.
The problem with fentanyl is reportedly getting worse in the counties of Northeast Florida. An article reporting on fentanyl deaths in Duval, Clay, Nassau, Hamilton, and Columbia Counties found that there were 49 deaths caused by fentanyl in 2015; within the first four months of 2016, more than that many people had died because of an overdose on fentanyl.

To fight the rapid increase in overdoses, law enforcement and first responders in the area are carrying naloxone to help temporarily reverse the problem. One employee with the Jacksonville Fire and Rescue Department stated that he had seen a 93 percent increase in the amount of Narcan used since January 2016.

Substance abuse rates for adolescents, middle school students, and high school students were higher for those in Duval County than Florida overall, with 44.3 percent admitting to drinking alcohol during their lifetime, and 34.6 percent report using using illicit drugs at least once, as compared to the Florida state rates of 42.6 percent and 30 percent respectively in 2014.16 Alcohol and marijuana were found the be the most commonly abused substances by this demographic in 2012, although rates declined from 2010’s numbers.17 Marijuana use in the month prior to the 2012 survey fell 14 percent to 11.5 percent, dropping it below the Florida state average of 12.4 percent of students abusing marijuana.18

Underage drinking dropped from 2012 to 2014 in Duval County, while conversely illicit drug use rose among resident students.19 Rates for all of Florida for both drinking and drug use by middle and high school students declined from 2012 to 2014 overall.20 Drug abuse rates by teenagers in Northeast Florida in 2014, however, were higher than those of other counties and of the state as a whole.21 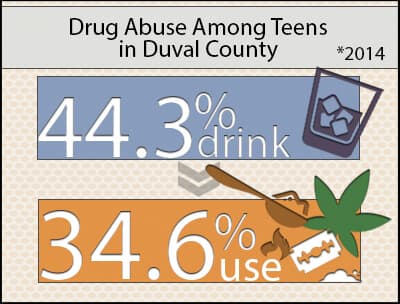 New and designer drugs such as Molly, a version of MDMA (ecstasy) often cut with other chemicals or fillers, synthetic marijuana sold under the name Spice, and synthetic cathinones, or bath salts may be increasing popular with the young crowd.

In the Duval County Public School System for the school year 2014-2015, there were 164 incidents involving drugs at local elementary, middle, and high schools.22 Most of these drug-related events involved marijuana, then prescription and synthetic drugs, followed by cocaine and meth.23

Increasing the awareness of the harm of drug use and abuse can potentially reduce teen drug abuse. In 2012, for instance, close to 70 percent of students believed that using prescription drugs recreationally, or without a valid prescription, was potentially harmful.24

There are several local organizations dedicated to decreasing future drug abuse and educating students, families, and the community on the possible hazards of drug abuse and addiction by providing prevention programs. The Florida Alcohol and Drug Abuse Association(FADAA) is a nonprofit and membership organization that is on the forefront of drug education and state policies, as well as connected to hundreds of treatment providers.25 Locally, the Jacksonville Community Council, Inc. (JCCI) strives to bring about positive change within the community by educating the public on various health and substance abuse topics.26 A community coalition attempting to educate children and families in order to reduce underage drinking and substance abuse in Jacksonville and Duval County by providing numerous resources for its residents is Drug Free Duval.27

In Duval County, there were more suicides than homicides (151 vs. 106) in 2012, and more than 10 percent of its residents reported that they experienced poor mental health for at least two weeks out of the month prior to a 2010 survey.28 Behavioral health services encompass both mental health issues and substance abuse, and there are many different options for treatment in the Jacksonville area.

When searching for a mental health treatment facility, understanding the options can help individuals to navigate the available choices. Mental illness is highly individual and therefore treatment should be as well. Substance abuse, dependency, and addiction may often co-occur with mental illness at rates between 30 and 50 percent of the time, making integrated and simultaneous care of both disorders important.29

Care for mental illness and/or substance abuse can range, depending on the particular circumstances an individual may be facing, as well as the type of disorder or substance abused. Different types of treatment may include:

Behavioral health services are funded by state and federal government funds and grants (public), through insurance coverage, or privately (self-pay or private-pay). Public health services are made available to underprivileged individuals, those receiving Medicaid funds or without mental health care access, eligible people in the criminal justice system, and those who may be deemed to be in a mental health crisis.30 These services may include crisis services, inpatient or outpatient care, education, support, recovery services, therapy, psychiatric care and counseling, medical services, medications, and community programs.

The Florida Department of Health in Duval County has a Behavioral Health Services Program that provides psychiatric services and mental health counseling to residents – adults and children alike.31 Jacksonville is one of only two regions in Florida that gives its residents access to what is called Florida Self-Directed Care where those eligible for public health services can choose their own provider and are given a budget to pay for the services needed.32 In Florida, the Florida Department of Children and Families (DCF) runs the Substance Abuse and Mental Health Program (SAMH), which is the state authority on care for substance abuse and mental health issues.33

Privately run and funded substance abuse treatment programs may provide a wider range of amenities and luxury services than publicly funded options and may have more availability when services are needed immediately. Private facilities may also have more desirable locations, accommodations, levels of privacy, and more alternative or holistic options as well as offer a comprehensive model of treatment and recovery services. Some may offer spa treatments, equine-assisted therapy, art therapy, yoga, massage, or acupuncture, in addition to other services. Many treatment facilities accept insurance plans, and many insurance providers cover mental health and substance abuse services to some degree. Individual insurance providers and particular plans may vary.

All mental health and substance abuse treatment providers in the state of Florida are required to be licensed in accordance with the services they provide.34 For a list of providers meeting the qualifications of the Substance Abuse and Mental Health Services Administration (SAMHSA), individuals can type in a local city, zip code, or address in the Behavioral Health Services Locator search field on the SAMHSA website.35 Individuals can then peruse a treatment provider’s specific website in order to assess what types of care may be offered and how to pay for services. Treatment providers usually have a free and confidential assessment that can be done over the phone or online as well as staff members familiar with insurance policies to help individuals find and fund the best level of care possible.

The Florida Department of Children and Families (DCF) is responsible for maintaining certification of mental health and substance abuse treatment professionals and facilities. The government organization maintains a list of certified recovery residences, both public and private; these can be searched by city in Florida. Many of them are also certified through the Florida Association of Recovery Residences (FARR).