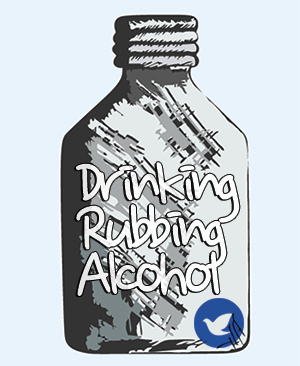 Alcohol use disorder affects 7.2% of the adult population in the United States, according to the National Institute on Alcohol Abuse and Alcoholism (NIAAA). That is about 17 million people ages 18 and older. People who struggle with this condition are unable to moderate how much they drink, crave alcohol, and may be physically dependent on alcohol. However, because alcohol is widely available for purchase, and legal for people ages 21 and older to consume in the U.S., it is easy to access.

Sometimes, people may be unable to get beer, wine, or liquor, causing them to resort to other substances. In some instances, a person’s body may develop such a high tolerance that they begin to seek out stronger forms of alcohol to consume, hoping to achieve their original level of intoxication. While drinking too much ethanol, the alcohol chemical at the base of alcoholic beverages, can cause serious harm to the brain and body, consuming other types of alcohol can be even more toxic. One of these dangerous forms of alcohol is isopropyl alcohol.

What is the Percentage of Alcohol in Rubbing Alcohol?

Although it is possible to drink rubbing alcohol, it is extremely dangerous. Isopropyl alcohol is produced differently than ethyl alcohol or ethanol. While beer, wine, and liquor are fermented and distilled, isopropyl alcohol is created in a laboratory, specifically for sterilization purposes outside the body.

However, people who struggle with chronic alcohol use disorder may consume rubbing alcohol or other kinds of non-consumable alcohol to reach an expected level of intoxication. One report on the problem in Canada notes that one 500 milliliter bottle – the equivalent of almost 17 ounces or just over one pint – in one 24-hour period is the same as drinking 30 beers.

Drinking rubbing alcohol can quickly lead to alcohol poisoning. People have reportedly died after ingesting one pint of isopropyl alcohol. While this form of alcohol does lead to intoxication, it is extremely dangerous.

What Are the Effects of Drinking Rubbing Alcohol?

According to National Capital Poison Control (NCPC), people who consume rubbing alcohol may act drunk. Signs of consumption include:

This industrial alcohol is very irritating to the stomach and intestines, so side effects from consuming this dangerous chemical include:

Bleeding, nausea, and other damage from consuming rubbing alcohol may cause dehydration, which can lead to seizures. It can also cause low blood pressure from internal bleeding and the effects of the alcohol as it is metabolized. A person who consumes rubbing alcohol may go into shock.

Isopropyl alcohol is metabolized very quickly, so the effects will impact the central nervous system all at once. Since alcohol is a depressant, involuntary actions in the body may slow down or stop. Heartbeat will slow, breathing will become depressed or irregular, and the gag reflex may not act. This can lead to oxygen deprivation or choking on vomit. Poor circulation from heartbeat changes can also cause damage to organ systems.

Since this chemical is extremely potent, it can cause internal burns. Mucous membranes in the mouth and nose, the back of the throat, the esophagus, and the upper respiratory area can all receive chemical burns on contact. For a person who has consumed rubbing alcohol, symptoms of these burns will include intense pain and cramping.

If a person ingests a lot of rubbing alcohol all at once, they may experience pulmonary swelling, or inflammation of and excess fluid in the lungs. This can make breathing difficult and cause oxygen deprivation.

If you or a loved one are struggling with rubbing alcohol abuse, please reach out to Recovery First Treatment Center for support. We offer a wide range of alcohol rehabilitation services that are focused on an individuals long-lasting sobriety. Our care team is available to pick up your call 24/7 or read more about our services by visiting our treatment overview page. 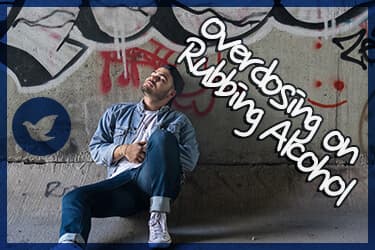 Toxicity from consuming rubbing alcohol, also called overdose or poisoning, is not only possible but very likely. Rubbing alcohol poisoning begins to set in within 30-60 minutes after ingestion. Immediately after a person consumes rubbing alcohol, they may feel intoxicated, and they could even black out. They are likely to suffer poisoning after that.

Not only does a lack of oxygen and blood circulation damage organ systems, but alcohol has blood thinning properties, so there are fewer red blood cells to transport oxygen and nutrients throughout the body. Hypothermia is a symptom of alcohol poisoning, even with ethanol-based beverages like whiskey, and it is more likely to occur in people who consume rubbing alcohol to get drunk. Heart attack becomes more likely, and because blood sugar levels also drop, seizures are likely to occur.

People who experience an overdose on rubbing alcohol may pass out very quickly, so they cannot relate symptoms as they get worse. It is extremely important to call 911 and get the person emergency medical help right away. While consuming a small amount of isopropyl alcohol accidentally may not result in poisoning or death, it is still important to receive prompt medical attention.

Although some people who struggle with chronic alcohol use disorder do consume rubbing alcohol, this product is not intended for consumption at all, and drinking it is extremely dangerous.

To overcome alcohol use disorder, professional medical help with detox and enter a rehabilitation program is a good choice for many. Recovery First, as well as American Addiction Centers’ other locations across the U.S., could be a good fit for your alcohol abuse recovery. Give us a call at to talk to one of our knowledgeable and compassionate Admissions Navigators for more information.

alcohol
Ready to get started?
We're available 24/7 to answer questions and help you make decisions about starting recovery from alcoholism.
Start Your RecoveryThe first step toward recovery is always the hardest. We're here to help.