Side Effects of Doral (Quazepam Tablets) 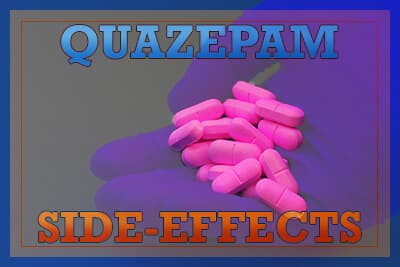 For many people, the idea of a good night’s rest is a dream itself. Whether for reasons of work, stress, genetics, living environment, or dozens of other factors, a healthy sleep schedule is elusive, to the point of causing daytime fatigue and exhaustion. Drugs like quazepam (sold under the brand name Doral) can help, but any tablet that delves into the nebulous world of sleep needs to be taken with care. The side effects of Doral – the way it affects the mind and the body – should be fully understood before consumption.

The medical journal Pharmacotherapy offers a basic explanation of what quazepam is: a “benzodiazepine hypnotic” that can be used as an addition to a main form of therapy for insomnia.

A person who is desperate to fall asleep at night may be familiar with the name Doral, but a term like benzodiazepine might not ring as many bells. But benzodiazepines account for some of the most popularly prescribed (and requested) drugs in America, becoming household names in the process, like Ativan and Xanax. US News & World Report writes that around one in every 20 American adults received a prescription for benzodiazepines in just 2008 alone.

But what do benzodiazepines really do, and how do they work? Medical News Today and LIVESTRONG explain the nature of the drugs: They target specific chemicals (neurotransmitters) in the brain that are responsible for controlling the transmission of nerves to the brain. People who have an imbalance in those neurotransmitters are unable to regulate their emotions on their own; they may be in a constant and deep state of anxiety, tension, stress, or depression. As a result, their reactions and behaviors are also impacted.

When a person who has this problem takes a benzodiazepine, the drug stimulates the creation of those mood-regulating neurotransmitters, providing an artificial boost to the chemicals that help regulate moods. A person who was once helpless against their anxiety or panic attacks can not only stave off the strong negative impulses, but also even enjoy feelings of tranquility and happiness.

“Benzodiazepines are frequently used to treat insomnia,” writes the Primary Care Companion to the Journal of Clinical Psychiatry. The clinical director of a sleep disorders center explains to WebMD that benzodiazepines change how a person sleeps, reducing the amount of time spent in certain stages of sleep. Such drugs change the “sleep architecture,” in her words, bypassing some of the stages of sleep in favor of other stages, which should ensure the person remains asleep for longer periods of time.

The success that benzodiazepines have had in treating insomnia has explained a large degree of the drugs’ popularity. The American Sleep Association notes that:

The causes of insomnia are far-ranging, but negative life factors, such as stress, depression, emotional distress, a poor work-life balance, and having to travel a lot for work, can contribute significantly to the development or exacerbation of insomnia. Many, many people can relate to one or more of those conditions, which naturally prompts them to seek out medical help. While some remedies include lifestyle changes and non-pharmacological-based treatments (such as yoga, meditation, mindfulness, etc.), having a doctor’s prescription for a benzodiazepine – like Doral – can provide a quick and easy fix for a very frustrating problem.

The Risk of Withdrawal

Like any drug, Doral can cause side effects in its users, even if the medication is taken as prescribed. Taking Doral beyond its prescribed uses (a practice known as off-label or diversionary use) will almost certainly cause side effects, of increasing severity. One notable side effect of quazepam was described by the Primary Care Companion journal as “a variable degree of daytime sedation.” Compared to other benzodiazepines (such as triazolam and temazepam), quazepam is better at treating the symptoms of insomnia with short-term use. Additionally, the journal writes that quazepam does not have any of the “frequent and severe side effects” that come from triazolam use or following withdrawal.

Drug withdrawal is a process that takes place when a person stops taking a drug after a prolonged (or intense) period of use. Regular or frequent consumption of a drug (legal or illegal, prescription or recreational) changes the functioning of the body and brain; this can be for pleasure, as with alcohol, or for healing, as with medication. Over time, even the brain can become so used to the presence of the drugs, to the point where any attempt to stop using the drugs causes unpleasant and distressing physical and psychological symptoms, such as muscle cramping and pain, nausea, vomiting and diarrhea, an unbearable craving for the drug, and even thoughts of suicide.

Drug withdrawal is a strong indicator that the use of a drug (no matter how benign or helpful it once was) has gone too far. Unfortunately, even though a drug like quazepam is not as risky as other benzodiazepines in that regard, it can nonetheless be a source of dependence and abuse for an at-risk user. A person who is so desperate to fall asleep (and stay asleep) might consume excessive amounts of Doral; instances of combining sleep medication with alcohol are all too common (and incredibly dangerous); and instead of eventually transitioning to non-pharmacological methods of securing sleep, a person might continue to take Doral pills for a very long period of time (by forging prescriptions, faking symptoms, or illegally buying pills online).

For that reason, a person who has been prescribed quazepam should check in with a doctor after 7-10 days of use, to see whether or not the regimen can be safely discontinued. A doctor should also be consulted if any side effects prove so strong or frequent that they impair daily life. Examples of such side effects might include:

While these side effects are all distressing in their own way, a doctor may nonetheless recommend a Doral prescription if they believe that the 7-10 day period of use will be enough to get a person’s sleep back in order. After that time, lifestyle changes (such as a fixed bedtime and routine) as well as other practices (yoga, meditation, etc.) should replace Doral.

However, some people may experience significantly distressing or intrusive side effects of Doral, at which point the consumption should be immediately terminated, and a doctor should be consulted. Examples of these more serious side effects include:

Even when Doral is discontinued per its prescribed use, there is a possibility that the insomnia symptoms could return, especially after the first couple of days. Other withdrawal symptoms, like the ones mentioned above, could make the temptation to go back on Doral very strong, but it is very dangerous to return to a drug after stopping use. Doing so might compel stronger, more frequent use that can lead to severe side effects and an unhealthy dependence on Doral.

Doctors can provide valuable information on how to avoid withdrawal symptoms when your body is not getting the quazepam it has come to associate with much-valued sleep.

When Doral Use Becomes Abuse

There is always the danger of abuse with any drug, and Doral is no exception. An addiction can happen to anyone, regardless of socioeconomic background, ethnicity, family history, or even mental health. Such factors can contribute to the development of addiction, but individually, there is no single “cause” for a person taking too many quazepam tablets.

If it happens, however, there are telltale signs. In addition to the severe side effects listed above, someone who is hooked on Doral might insist on getting more pills, even if the insomnia is noticeably better. Even though Doral is meant to be taken for a short period of time, someone with a problem might have to consume higher amounts of the drug, just to get the same 7-8 hours of sleep a night. Such behavior indicates that tolerance for the drug – the amount of the drug required for a basic effect – is too high, which is often the case when too much of the substance is being consumed.

Coming to depend on the calming and sedating effects of Doral is another indicator of possible addiction. In a best-case scenario, quazepam is consumed purely within the parameters of a prescription and then discontinued when a doctor feels that it has served its purpose (that is, the insomnia can be managed by non-pharmacological therapies). On the other hand, a person who can only experience happiness and peacefulness while taking Doral will soon be unable to function without a constant stream of quazepam. When the stream inevitably dries up, the person might resort to theft or bribery to obtain more quazepam, or even more dangerous substances, to scratch what has become a very dangerous itch. Hobbies, social life, and professional and academic commitments are all discarded, because none of these are as important as getting more Doral.

Talking to Someone Who Has Been Taking Too Much Doral

This is how a drug addiction starts and develops. If you notice a family member or a loved one exhibiting any of these signs, it is incredibly important to encourage them to seek treatment as soon as possible.

The earlier that conversation is had, the better. The addiction will not be as strong, and people who are confronted with the reality of their substance abuse sooner, rather than later, will have a much easier time looking for, and getting, help.

But if Doral abuse has been going on for some time, then it may be harder to convince someone that they have a problem (because, by that point, they have come to make a very strong psychological association between Doral and relief from insomnia). In the event that initial entreaties to stop taking drugs, or to consult a medical professional for help, are rebuffed, family members should talk to a doctor or treatment center that can recommend a professional interventionist.

At a treatment facility, doctors will come up with a treatment plan to wean the client off Doral, minimizing the discomfort by administering anti-anxiety and anticonvulsant drugs to keep the worst of the withdrawal effects at bay. Depending on the severity of the abuse, as well as a number of other factors (such as whether the client has been abusing any other drugs, and the client’s mental and medical health), this process (also known as medical detoxification) can last for as little as a week, to as long as 4-5 weeks.

By the end of that time, however, the client will be freed from the physical craving for Doral. What follows then is a period of counseling, where a therapist will help the client address the psychological issues behind the quazepam abuse. Such issues may be related to the insomnia that drove the initial consumption of Doral, but any other underlying causes behind the inability to sleep, and the inability to deal with the problem in a healthier way, will be addressed in counseling.

Insomnia can be a frustrating, even debilitating condition, and drugs like Doral can go a long way in helping a person achieve sleep. But even the most helpful medications have to be taken carefully, and side effects and the risk of abuse must be considered and discussed with a doctor before a treatment program begins.

benzodiazepinesprescription
Ready to get started?
We're available 24/7 to answer questions and help you make decisions about starting recovery from drug use.
Next Steps & ResourcesBrowse helpful articles and find treatment options.