What to Know About the 12 Steps

Since its beginnings in the 1930s as the basis for Alcoholics Anonymous (AA), the 12-Step approach has become one of, if not the most, recognized programs to address alcoholism and addiction in all forms.

Read on to learn more about the 12-Step program, how it works, and how it helps support long-term recovery.

The 12-Step model is a set of structured steps designed to help people who are addicted to all types of substances, such as heroin, cocaine, and alcohol. By following these steps, individuals in recovery can achieve and sustain sobriety.

The phases of 12-Step programs are flexible. While a person is advised to do them in order, they are able to repeat a step or go back to a step at any given time. The program’s flexibility allows the person to recover at a pace tailored to their individual needs.

History of the 12 Steps

In 1935, a stockbroker from New York named Bill Wilson and a surgeon from Akron named Bob Smith met through a non-alcoholic fellowship. Soon thereafter, the two men (who had both struggled with alcoholism themselves) began working with other individuals addicted to alcohol who wanted to get sober. Through three small groups, Bill W. and Bob S. were able to help about 100 people get sober by 1939.

In 1939, the fellowship led by Bill W. and Bob S. published “Alcoholics Anonymous”, a book with their practices, beliefs, and the 12 Steps. As word of mouth got around, more and more people who had difficulty ending their troublesome drinking patterns showed up to meetings and began practicing the 12-Steps in and effort to get sober. Today, nearly 100 years later, approximately two million people in 180 countries worldwide are members of A.A. and have successfully maintained their recovery. This 12-Step foundation has even expanded to help individuals attempting to overcome other types of substance use disorders, known as Narcotics Anonymous (N.A.).

Oftentimes, in 12-Step groups, new members will have sponsors. Sponsors are members who have several years of experience in recovery and help mentor new members as they work on their recovery journey. There is great importance in a sponsor, as they do more than just help guide individuals.

The sponsor themself is able to share their life experiences as they relate to their substance use disorder in and effort to connect and help others. They also serve as a form of support and line of communication, as sponsees can always reach out to their sponsors when they are feeling upset, having difficulty managing a situation, or even if they feel like they are on the brink of relapse.

How to Find a 12-Step Sponsor

One of the easiest ways to find a sponsor is to attend 12-Step meetings. Normally, at the end of a meeting, an announcement will be made for those who wish to be matched with a sponsor. Or, in other instances, members will be encouraged to raise their hands if they are available to be a sponsor, allowing those looking for a sponsor to reach out after the meeting.

The most important thing a person can do when looking for a sponsor is ensuring that they find someone who they are comfortable with. These relationships are always viewed as temporary, so if a particular partnership isn’t working out, there’s no harm in ending it and finding someone new to work with.

Which Groups Use the 12-Step Approach?

The 12-Step approach is most commonly associated with Alcoholics Anonymous, which has an estimated 1.35 million members in the United States alone. However, those who suffer from an alcohol addiction aren’t the only ones who may benefit from a 12-Step program.

Some other programs that use the same 12-Step approach include:

How Do 12-Step Programs Work? 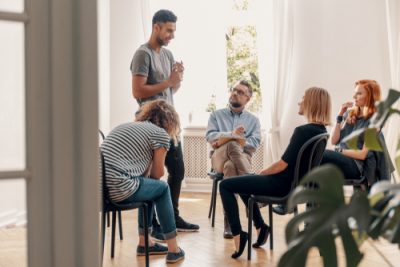 12-Step programs help individuals accept that they have a problem and identify their shortcomings in an effort to treat them.

According to the American Society of Addiction Medicine, 12-Step programs can greatly improve a person’s psychosocial function, which contributes to their ability to sustain sobriety.

The actions involved with many of the steps are associated with certain types of behavioral therapy that aim to identify issues and negative thought patterns, and then alter the thought pattern in order to change the resulting behavior.

The anonymous nature of most 12-Step groups makes it difficult to pinpoint success rates; however, the model’s long history is a testament to its effectiveness.

Many 12-Step programs are focused on specific demographics, such as men, women, or certain age groups. This can helpful for some people, as they may find it easier to relate to other members.

How Effective Are 12-Step Programs?

12-Step programs are unique in that they offer a great deal of support and guidance for those in recovery but are not the traditional evidence-based therapeutic modalities typically offered in a treatment program. However, that does not mean that 12-Step programs are ineffective — in fact, it’s quite the opposite.

Studies show that the median length of abstinence in AA and NA members is longer than 5 years. Additionally, based on several surveys, men appear to be most responsive to 12-Step programming, but both genders seem to have most success remaining abstinent between the ages of 31-55, with about 45% of males and 56% of females staying sober.

Despite 12-Step programming being an excellent support for those in recovery and a positive influence in their lives, it does not replace the need for professional addiction treatment, especially for those who are addicted to substances that can cause dangerous withdrawal symptoms (i.e., alcohol and benzodiazepines).

How Does a 12-Step Program Help With Aftercare?

12-Step programs help with aftercare by providing people with a support system after they leave rehab.

According to the National Institutes of Health, 40%–60% of people in recovery relapse back into substance use, which is why creating a robust aftercare plan is an essential part of treatment.

For many, the continuum of addiction care starts with detox, followed by comprehensive rehabilitation and ongoing aftercare.

Addiction rehab facilities, like Recovery First near Miami, often incorporate 12-Step meetings into their weekly schedules, which patients can continue in aftercare.

In meetings, group members can share their challenges with sobriety and recovery. Sponsors and fellow group members help build a fellowship and community, and can provide an extra support when the urge to relapse arises.

Find Help for Addiction at Recovery First in Hollywood, FL

Our addiction treatment center in Hollywood, Florida offers evidence-based programming that includes the 12-Steps and other types of evidence-based therapies designed to help those struggling with substance use disorders get into recovery.

If you or someone you love needs help stopping drug or alcohol misuse or addiction, reach out to our staff at Recovery First today. Our admissions navigators are available 24/7 to help answer all of your questions, including those about insurance coverage for rehab, how to pay for rehab, and how to start the admissions process. Call us at right now to get more information.

Begin your recovery right now by verifying your insurance and filling out our secure now.

12-stepaanatreatment
Prefer getting help via text?
We're available 24/7 via text message. Signup below for access to our team when its convenient for you!
and many more...
Get the Info & Help You NeedLearn about the options available at our South Florida addiction treatment center.