Will Florida’s Office of Drug Control Be Brought Back to Life in 2018? 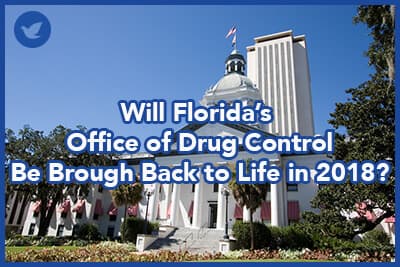 In response to the opiate addiction and overdose epidemic that has swept the state, Governor Rick Scott convened a statewide panel to come up with a coordinated plan to address the problem. One of their top recommendations was simple: revive the Office of Drug Control in Florida.

In response, four different bills were presented to the state legislature with the goal of doing exactly that. However, none have been scheduled to be heard by a committee as of yet, and no other efforts have been made. As the days tick by in the new year, it is becoming less and less likely that this task will be accomplished any time soon, and there is concern that the lack of momentum will translate into losing the endeavor entirely.

Representative Nicholas Duran sponsored one of the four bills. He says: “You never know. I’m still working on trying to get it put up. There still is time.”

According to Representative Duran, one of the biggest obstacles to reinstatement of the office is the perception that it was ineffective when it was open, especially among Republicans. He said he had a difficult time trying to convince people that it will be stronger, more directed, and more efficient in its new incarnation.

Said Representative Duran: “I think that’s something that was concerning to folks and didn’t help with moving it forward. They didn’t see the results.”

Another opponent to reinstating the Office of Drug Control in Florida is Governor Scott. He disbanded the four-person office when he became governor. He says that the duties for which it was responsible have been assigned to other agencies and that it is unnecessary. The members of the panel support its reinstatement, however, because they value the idea that an organization working on correcting the problem with opiate addiction be directly beneath the governor. In this way, he can coordinate efforts and have immediate access to the information he needs to make decisions that will benefit the families in crisis and hopefully limit the number of lives lost to opiate overdose in Florida.

One of the panel members said: “I think we need that authority, that power, to get things done.”

Representative Duran agreed, saying: “I think this is a smart enough body that we can make sure it’s impactful.”

In 2017, it is estimated that about 16 people in Florida died due to heroin use and abuse every single day. That adds up to almost 6,000 people, a considerable number. Governor Scott is right to be concerned and doing everything possible to turn things around is the expected response. Unfortunately, even with so many agencies united in purpose, it is difficult to come to a consensus about how best to accomplish the task at hand. There are finite resources, both financial and human, and it is not easy to guess what will be most effective with what we have available.

The good news is that it is a challenge that many Floridians are working hard to address proactively. There have been a number of different changes implemented over the last decade as it became clear how striking the problem really is. Some of the most effective include:

For families who are watching a loved one struggle with active addiction, there is no time to wait for the government to figure out what agencies to implement, what laws to enact, and where to invest funds that are most effective. The time is now to connect with treatment that is comprehensive and supportive of the entire family’s journey to recovery. Are you ready to take the first step?