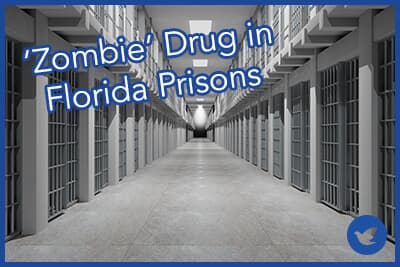 Inmates, corrections officers, and the Florida Department of Corrections agree: Synthetic drugs are a serious problem in the Florida prison system. Inmates are using these drugs regularly enough that it is normal to see them walking around like “zombies,” passing out into their food trays, or having a seizure and foaming at the mouth.

The drug most commonly found in Florida prisons is a synthetic drug that most often goes by the name K2 or Spice. Experts estimate that this substance causes the bulk of the hundreds of overdose death that happen among inmates annually (as many as 500 deaths total are expected in Florida prisons this year). It is the same drug that caused the 70+ overdoses in Connecticut over a four-hour period this month, and families are scared that their loved one will be the next victim of the drug.

Unlike the overdoses caused by opiate drugs like heroin or painkillers, there is no medication available that can stop an overdose caused by K2 and save the life of the individual in crisis. Synthetic cannabinoids sold on the street and smuggled into prisons do not have a specific chemical makeup, which means that they can contain any number of compounds and chemicals. For medical professionals arriving on the scene to help, there is no way to know exactly what was ingested and respond accordingly. To make matters worse, many inmates try to cover for each other or otherwise stop corrections officers from finding out what is happening in order to avoid punishment, which can further delay or stop them from getting the care they need.

The budget has been an ongoing issue, not just in Florida but in prison systems across the country. The budget set aside to run state-managed prisons has been cut and cut until there is very little left to manage the basic care and upkeep of inmates and the buildings they live in. This has led to a host of problems, including:

Where Do We Go from Here?

It is not just the inmates who are struggling due to the conditions of Florida corrections facilities but also corrections officers and the families of all involved. Exposure to drug use and violence on a daily basis is difficult, and for families at home who never know what to expect, it can add to the stress and trauma associated with imprisonment.

Is your loved one living with an addiction while incarcerated? Are you concerned that jail or a return to jail may be coming next for your family member? The time is now to learn more about treatment options that can help turn things around for the whole family.