The Risks of Smoking or Snorting Adderall 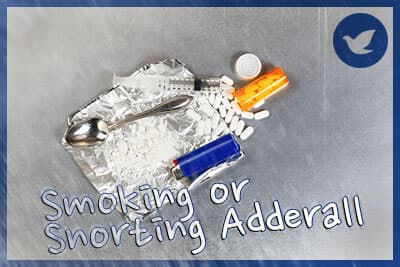 Adderall is a combination of amphetamine and dextroamphetamine, which helps to improve attention in people with ADHD; however, the drug has been falsely associated with improved cognition, memory, and physical performance in those who do not have ADHD or narcolepsy. For many people, abusing Adderall is a way to cram for a test, lose weight, or experience greater physical energy before a professional sports game. These are dangerous misuses of the drug, which can lead to addiction and chronic health problems.

Abuse of Adderall Leads to Addiction

When a person abuses Adderall, they may start by consuming the drug orally. All stimulant drugs, whether Adderall, cocaine, or crystal meth, increase the amount of dopamine released by the brain; when a prescription stimulant like Ritalin or Adderall is taken orally, the dose will control the release of dopamine more slowly, at therapeutic levels. For those with a condition like ADHD, this timed release moderates symptoms for a long time; for people who abuse the drug, however, the slower release of dopamine may become addictive, and they will then begin to crave a faster release. Their body will likely develop a tolerance to the drug over time, meaning they will need to take more to get the original effects.

Instead of consuming more of the drug, which can lead to an overdose, some people may find other ways to abuse Adderall, so it begins to affect their brain faster. Smoking and snorting drugs are two ways that people abuse drugs so they affect brain pathways more rapidly, but these methods are incredibly dangerous and have serious side effects.

Regardless of how a person abuses Adderall, taking this drug with no medical reason is dangerous and can lead to addiction. Stimulants can cause heart problems, lung damage, and even affect memory and cognition. It is important to get help to detox from the drug and then enter a complete rehabilitation program to treat stimulant addiction.