Withdrawal, in general, is the term that refers to the physical and emotional changes people go through when they attempt to stop taking an addictive substance. These symptoms can mimic illness; include symptoms like mood swings, anxiety, and depression; and generally leave the person feeling exhausted. Withdrawal is affected by many factors, and everyone experiences withdrawal differently, although people who withdraw from certain drugs, such as heroin or alcohol, experience clusters of similar symptoms.

In 2002, the Food and Drug Administration approved Suboxone as a treatment to help people suffering from opioid addiction taper off the substance and become sober. Suboxone is a combination of buprenorphine, a partial opioid agonist, and naloxone, which blocks the uptake of large amounts of opioids in the brain. Since Suboxone has been approved for prescription use, however, there are more reports of this medication being misused – either abused recreationally, or diverted (sold illegally for illicit use). There are still people who can become dependent on Suboxone to feel normal, and some people have successfully bypassed the naloxone to get “high” on the buprenorphine in the medication.

Suboxone is intended to be used as part of a comprehensive opioid addiction treatment program. It is not sufficient to simply take Suboxone and hope to recover from opioid addiction; therapy is needed in conjunction with pharmacological treatment.

If a person has been abusing Suboxone, professional help is needed to detox from the medication. Though methadone also has abuse potential, the more rigid distribution guidelines for its use may make it less likely that a person will abuse it. Medical oversight is critical during the Suboxone withdrawal process since people who need to withdraw from Suboxone generally have a history of opiate abuse. Attempts at “cold turkey,” at-home detox have much lower success rates than medical detox.

Symptoms of Suboxone withdrawal are similar to those of opioid withdrawal. They may include:

In some rare cases, people withdrawing from Suboxone report hallucinations.

Buprenorphine, one of the two active ingredients in Suboxone, has one of the longest half-lives for partial or full opioid agonists. The fact that it lasts so long in the body is a benefit when used as a prescription, because it helps to reduce cravings for stronger opioids for a longer period of time. However, for a person addicted to Subutex or Suboxone, the longer half-life means that withdrawal can take longer. Buprenorphine’s half-life is 37 hours; full opioid agonists, like morphine, for example, typically have a half-life of 2-7 hours. While this means that Suboxone withdrawal symptoms will not begin the same day, it could impact how long the drug takes to leave the body. 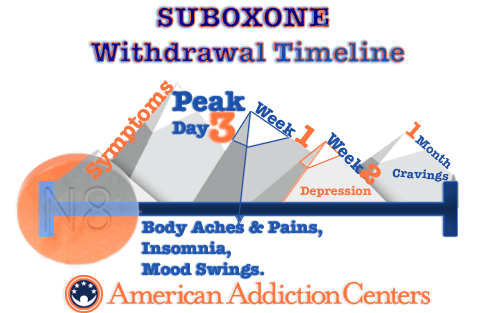 Other factors can impact how long any medication, like Suboxone, takes to fully leave the body, including:

Buprenorphine withdrawal can last up to nine days, while naloxone will clear the system quickly with no effects. Withdrawing from buprenorphine takes longer than withdrawing “cold turkey” from other opioids, like heroin, which can be more physically dangerous, but the worst withdrawal symptoms typically last for about one week. However, lingering symptoms can appear for the next 2-5 weeks.

People who attempt to go “cold turkey” to end an addiction are also more likely to relapse. This can be especially dangerous if individuals have flushed all Suboxone from their systems, and then take a dose they used to take to get high. The body is no longer tolerant of the drug, and this can more quickly lead to overdose.

It is important to get help for Suboxone addiction. Rehabilitation programs can offer medical oversight to ease withdrawal symptoms, as well as group therapy and individual therapy to support clients through the withdrawal process. With comprehensive care, people can leave addiction and Suboxone abuse in the past.

matopiatesuboxonewithdrawal
Help is a Phone Call Away
Please don't suffer with substance abuse thinking no one cares. We care and want to help you get back to the life you deserve.
Get the Info & Help You NeedWe're open across the US. Learn about your options.