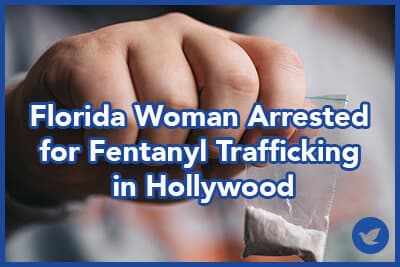 It’s a case that hit close to home. Hollywood police arrested a local woman this month on charges of possessing and trafficking large amounts of heroin mixed with fentanyl. Also, allegedly in her possession at the time of arrest were cocaine, drug paraphernalia, and bags of straight fentanyl. Police report that 21 bags of fentanyl were found in the woman’s car at the time of her arrest.

Chris O’Brien is the interim chief of police. In a statement, he said: “Our goal is to prevent these drugs from being distributed, harming our community, and causing the rampant opioid overdoses we have seen in Broward County. That’s why it’s important for our detectives and undercover operations to concentrate on the parties responsible for selling and trafficking these deadly drugs.”

While it is always a positive thing to remove a dealer from the streets and their product with them, it is important to remember that there is a reason why investigations like these are ongoing; they continually unearth more and more drug traffickers willing to risk their freedom for money with no regard for the lives they shatter along the way.

Fentanyl is a synthetic opiate analog, a drug that is similar in chemical makeup to heroin and prescription drugs like hydrocodone and oxycodone. About 100 times more potent than morphine and up to 50 times more powerful than heroin, it is rarely sold or used on its own; instead, it’s used to lace other street drugs to increase their potency. The goal of drug traffickers who engage in this practice is to have their supply be the most sought after on the street. They want high-dollar returns and immediate turnaround. When word gets out that a certain batch is so strong that people are overdosing when they use it, rather than shying away from it, many living in active addiction seek it out.

Why? Such is the nature of addiction. Long-term use of any addictive substance can actually change the size and shape – and therefore the function – of certain neurotransmitters in the brain. As a result, the person may take risks they would never take otherwise, all with the goal of triggering the pleasure pathway in the brain and experiencing that coveted rush or high. Even when death is on the line and a serious possibility, it feels “worth the risk” to those who are constantly fighting to stave off opiate withdrawal symptoms and “stay well.”

According to the Centers for Disease Control and Prevention (CDC), opiate overdose was the cause of death for more than 42,000 people in the United States in 2016. It is a growing problem that often starts in a doctor’s office with a legitimate prescription for acute pain after a surgery or accident or for the treatment of chronic pain. When the addiction outgrows the prescription and it is not possible for the person to maintain their addiction through legal sources, many turn to street drugs like heroin. Far less expensive than painkillers sold on the street, heroin is very similar in effect to prescription medications like hydrocodone and oxycodone, but with a few deadlier risks, including the addition of fentanyl.

In Florida, families with a loved one living in active addiction are on high alert due to the rise of fentanyl use and abuse and understandably so. In addition to costing the country about $500 billion per year, according to the White House Council of Economic Advisors, opiate addiction is financially and emotionally devastating to families on a personal level, destroying their ability to feel safe, calm, and happy in their lives.

The only way to truly combat the risk that you will answer the phone or the door to a police officer informing you of the passing of your loved one to addiction is to help them enter treatment as soon as possible. A program that provides medical detox for opiate addiction as well as the long-term psychological intervention needed to maintain their newfound sobriety is necessary to safely stabilize in recovery and begin the process of starting over.

Is today the day you help your loved one take a step closer to recovery and away from the risk of overdose?