10 Arrests Made in FL Drug Bust

Deputies of Volusia County were busy at the end of last month, working on Operation Clean Slate and making 10 arrests across the county as a result. The focus of the investigation and the arrests was low-level drug dealers, including the owner of a convenience store in the Daytona Beach area who allegedly sold synthetic marijuana. Guns, ammunition, marijuana, hashish, hydrocodone pills, hallucinogenic mushrooms, and a range of paraphernalia related to the sale of substances, including a sealer machine with baggies, were all seized during the arrests.

Operation Clean Slate is still underway and arrests are expected to continue in the coming months as law enforcement continues their efforts to fight the ongoing epidemic of drug use, addiction, and overdose in Florida. 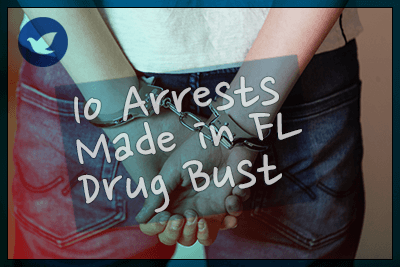 Often times low-level drug dealers are drug users themselves. In many cases, their use of substances has increased to the point that they are no longer capable of maintaining employment at a time when their addictions have never been more expensive. As a result, many pay a lump sum for a larger supply than they “need” from their dealer with the goal of selling off what they don’t “need” at a high enough price to make the amount they use free and maybe even make a little money on the side.

Is low-level drug dealing a criminal offense when it is directly related to an active and untreated addiction, or is it a symptom of the need for drug addiction treatment – or both? It is a question that many state courts and drug courts are trying to answer, with most choosing to criminalize any level of drug sales, regardless of the driving force behind the behavior.

As a result, low-level drug dealers end up incarcerated with high-level drug dealers, which normalizes criminal life and connects them with future business partners. It also helps them to learn tips and tricks for engaging in the “business” more effectively. Essentially, prisons become training centers for entry-level offenders with a substance use disorder to move up through the ranks. At the same time, it stops them from connecting with drug rehab and treatment services and support that can make a real difference in their lives.

Which Direction Are We Headed?

On the one hand, many people are very clear that the so-called “War on Drugs” that was launched in the 1980s that focused heavily on significant jail time and minimum sentences across the board was hugely ineffective – not just in terms of deterring past and present offenders from repeating their behaviors but also in deterring others from following that course. The result has been overcrowded, understaffed, and under-resourced prisons that do little more than warehouse people for as brief a period as possible then push them back out into the world, worse off than when they came in. The American public has taken notice, and many are lobbying hard to make changes, including decriminalizing some substances and dropping mandatory minimum sentences for drug-related charges.

On the other hand, some states, including Florida, are increasing the mandatory minimum jail time for certain drug-related offenses, especially those that have to do with trafficking and/or opiates like fentanyl. Especially when it comes to sales on any level, many are holding firm that this is a criminal offense. If anyone is connected to giving someone a dose of a drug that ultimately causes that person’s death, murder charges may be levied.

There are certainly opposing factions that are pushing and pulling at the current status quo in an attempt to determine the most effective path forward – one that will limit use of drugs and alcohol, cut down on the amount of illicit substances in our society, and reduce the rates of addiction and drug overdose deaths. What do you think is the best course of action?