Am I Addicted to Ritalin? 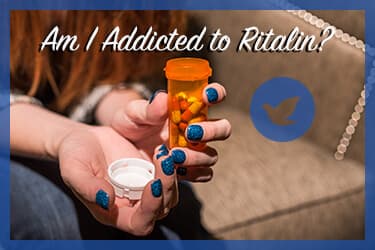 Ritalin is a prescription stimulant medication primarily used in the treatment of attention deficit hyperactivity disorder (ADHD). It is also prescribed to treat narcolepsy, a daytime sleepiness disorder. The active ingredient in Ritalin is methylphenidate, which acts on the central nervous system and regions of the brain to increase focus, attention, and energy levels while also decreasing appetite and the need for sleep. Subsequently, it raises heart rate, blood pressure, body temperature, and respiration levels as well. Ritalin helps to control impulsivity and concentration levels while improving the ability to regulate emotions in those who suffer from ADHD.

Ritalin is a Schedule II controlled substance by the Drug Enforcement Administration (DEA) since it has a high potential for misuse, abuse, and causing dependency and addiction. Schedule II drugs have the strictest regulation among prescription drugs, and only illicit drugs are classified higher.

Ritalin may be abused as a “study aid” by young adults and adolescents trying to get ahead at school or work. It may also be used as a weight loss tool, energy enhancer, or as a “party drug” for the euphoric high it can produce when used recreationally.

When used for medical reasons as directed and under professional supervision, Ritalin is considered to be a relatively safe and effective medication. When it is abused, however, and particularly when used in high amounts and when altered and then snorted or injected, methylphenidate is considered to be highly addictive, the Primary Care Companion to the Journal of Clinical Psychiatry warns. The DEA publishes that according to the 2011 National Survey on Drug Use and Health (NSDUH), around 5 million Americans over the age of 12 had misused or abused Ritalin (i.e., used it for nonmedical purposes) at some point in their life.

The National Institute on Drug Abuse (NIDA) reports that stimulants like methylphenidate can cause a rapid rise of dopamine levels in the brain, which may play a role in why these drugs can be so addictive. Dopamine is one of the brain’s chemical messengers that it uses to send signals of pleasure. When levels of this neurotransmitter are elevated, a powerful high can be created. Individuals may be keen to reproduce this burst of euphoria and be encouraged to take Ritalin regularly.

With time and regular use, a person can become tolerant to certain doses of Ritalin, as the brain becomes accustomed to its presence and artificial stimulation of the central nervous system. In order to keep feeling the desired effects, a person will then need to take more Ritalin more often. Increased dosage also heightens and speeds up dependency, which is what occurs after the brain expects the drug to continue to influence its chemical makeup. When dependence on Ritalin is formed, a person will likely undergo intense withdrawal symptoms when the drug wears off and is not active in the bloodstream. Ritalin withdrawal symptoms can often be the opposite of what the drug induces and include depression, anxiety, difficulties concentrating and staying on task, sleep disturbances and insomnia, fatigue, hunger, cravings, irregular heart rate and blood pressure, and trouble feeling pleasure at all.

Biological and genetic factors can influence how quickly or significantly a person’s dependence on Ritalin may form. Family and personal history of drug or alcohol addiction can increase the odds for Ritalin dependence and addiction, for instance. Environmental stressors, polydrug use, and incidents of trauma can also impact drug dependence as can any mental health or medical conditions that may co-occur. The amount of Ritalin a person takes at a time and how long they take it, as well as the method of abuse, also play a role in the onset of drug dependence.

Drug dependence and withdrawal are often symptoms of addiction. A person can be dependent on Ritalin without being addicted to it, however. Addiction is a brain disease that is indicated by an inability to control the amount of drugs a person takes and how often they take them.

Addiction has many emotional, physical, behavioral, social, and interpersonal side effects. Since addiction is a treatable disease, recognizing the warning signs and symptoms early is important in order to secure prompt care and ensure better chances at a more robust recovery.

Signs of Ritalin addiction include:

NIDA reports that when at least two of these symptoms are present within a year, addiction may be diagnosed.

Getting Help for Ritalin Addiction

Addiction involving Ritalin can have many hazardous side effects, which can be minimized with a comprehensive treatment program. The Substance Abuse and Mental Health Administration’s Treatment Improvement Protocol (TIP) for stimulant dependence and addiction highlights several methods and techniques that are beneficial in supporting recovery, including pharmacological, supportive, and therapeutic approaches. Each individual is different and will have variable treatment needs.

Medications are often useful in helping to manage withdrawal symptoms and cravings, and they can also treat any co-occurring disorders that may be simultaneously present with addiction. Medical detox is often the first stage in a Ritalin addiction treatment program as a person may need to first reach a level of physical stability before advancing into intensive therapy.

NIDA reports that addiction treatment should address emotional, social, and physical components of the disease and include a variety of treatment methods to promote long-term recovery.

prescription
Ready to get started?
We're available 24/7 to answer questions and help you make decisions about starting recovery from drug use.
Next Steps & ResourcesBrowse helpful articles and find treatment options.