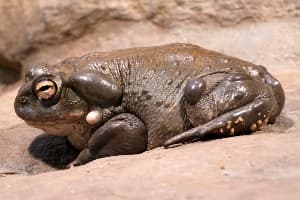 Toad Licking doesn’t taste anything like chicken, but it might make you intensely hallucinate and possibly die. That’s because the highly sought-after compounds secreted by certain toads are actually venom, and they’re meant to incapacitate and even kill would-be predators like raccoons, dogs, and big apes like humans. But like all things that will get you high, there are plenty of people who are willing to take the risk.

In the United States the Sonoran Desert Toad, also called the Colorado River Toad, is known to secrete a venomous substance designed to sicken and kill attacking predators. This venom contains two compounds that are highly psychoactive: 5-MeO-DMT and bufotenin. (1)

While similar, 5-MeO-DMT and bufotenin are different substances that both achieve the same effect by acting as nonselective serotonin agonists. (2) Serotonin is the same neurotransmitter affected by other drugs like ecstasy; a similar substance also belonging to the family of hallucinogenic tryptamines.

The Colorado River Toad has large glands on the sides of its head, and other glands near its mouth and jaw that secrete a sticky white substance meant to get in the mouth, eyes and mucous membranes of predators. (3) Urban myth and undying use of the term “toad licking” would have one believe that people are going out and finding these toads and licking them. But that’s not the case.

Couldn’t Give a Lick

The secretions of the Colorado toad are potent and in the raw form are poisonous. Humans have known this for thousands of years, and long ago perfected methods of collecting and processing the toad’s secretions for safer consumption. (4)(5) This generally involves stimulating the toad to release the venom, then collecting and drying the venom for future consumption. (1) Most people are not actually licking the toads in order to get high; instead they’re sniffing or ingesting a prepared substance made from the toad’s venom.

However, there are some reports of people actually licking the toads – along with possible associated instances of emergency room visits and deaths. (6)

There are also reports of domestic dogs licking the toads in a seeming effort to obtain the hallucinogenic effects (1), with at least one case where the animal – a household pet – became hopelessly addicted and had to be forcefully weaned from the amphibians by its owners. (7)

Farther Down the Hole than You Want to Go

By most accounts, the psychoactive compounds present in Colorado River Toad venom are far stronger than most hallucinogenic drugs. This is true even when compared to powerful psychoactive/hallucinatory drugs like LSD, ecstasy and various mushrooms. In fact, a report issued by the United States Drug Enforcement Agency (DEA) stated that users of 5-MeO-DMT rated the substance as 4 to 5 times more powerful than DMT. (6) (DMT is a widely-known street drug of extremely intense potency)

It May be Killing Them

While some report that “milking” toads for their hallucinogenic venom doesn’t harm the creature, the same sources also indicate that toad skins are sometimes sold, indicating that these amphibians are being killed for their secretions. In fact, the hunt for the Colorado River Toad may be leading to its extinction. According to one naturalist blogger, the toad has nearly abandoned its territories in California, and numbers in other southwestern states are declining as well, making the toad a candidate for protection under the Endangered Species Act. (8)

Toad licking is illegal, and possession of bufotenin or 5-MeO-DMT will result in arrest and prosecution. Both substances have been classified by the DEA as a Schedule I substance with no medical or therapeutic value and having a high potential for abuse. (6) The first arrest for possession of bufotenin occurred in 1994 by narcotics agents in California. In that case, live Colorado River Toads were impounded. (9)