Side Effects of ProSom 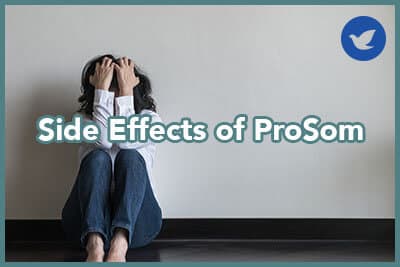 As the media and governmental authorities make clear to the public, the US is currently facing a prescription pill abuse epidemic. Prescription medications with abuse potential include different categories of drugs, such as opioids (pain relievers like hydrocodone), stimulants (such as Adderall), and benzodiazepines (sedatives). ProSomis a prescription benzodiazepine. ProSom is a branded drug with an active generic ingredient called estazolam. While ProSom has different potential medical benefits, it is mainly indicated for individuals who have been diagnosed with insomnia (i.e., trouble falling asleep or maintaining sleep). ProSom, like benzos in general, has an effect in the brain of slowing down nerve activity, which in turn is conducive to sleep.

Physical and Psychological Side Effects of ProSom Abuse

At present, there is ample information available to the public about the dangers of prescription pill abuse; however, such warnings did not always exist. Individuals who are currently experiencing ProSom abuse may have started on the drug without any abuse intention whatsoever. For instance, if a person with insomnia was prescribed ProSom, but upped the dosing outside of their doctor’s orders, addiction may have resulted.

From a medical standpoint, there is little risk of a patient becoming addicted to ProSom if the prescribing doctor’s orders regarding use are strictly observed. Some patients may simply have not been aware of the risk of addiction when, and for whatever personal reason, they began to increase their dosage of this medication. In other words, they may not start out with an abuse intention but nonetheless do develop an addiction through misuse.

In other instances, a person who abuses ProSom may have had this intention from the start. Such is the case when a person does not have a legitimate need for this drug but acquires it, outside of a legitimate patient-doctor relationship, in order to get high. ProSom, for this individual, may be a singular drug of abuse or part of polydrug abuse. An individual who abuses ProSom in this way faces a significant risk of addiction.

One of the main ways to know that ProSom abuse is occurring is to be aware of the symptoms and signs. A person who is abusing ProSom may experience any one or more of the following abuse symptoms.

The branded and well-advertised sleep medication Ambien is not a benzodiazepine, but it works in the brain in a way similar to ProSom. Stories abound about how people who use or abuse Ambien have been known to engage in high-risk activities while having no memory of doing so. For instance, individuals taking Ambien may drive a car or take a bath at the risk of serious personal harm because they are not fully awake when doing. They may not remember the activity, though they often wake to see the evidence, such as being in a full bathtub rather than in bed. It is important to note that this behavior is also one of the known side effects of ProSom in some individuals.

A review of the above physical symptoms and signs of ProSom abuse reflects overlap. Since each person’s physiological makeup is different, symptoms and signs can range in type and number. For a person who is concerned about a loved one’s abuse of ProSom, the key is to know the side effects generally and to get immediate medical attention if acute symptoms, such as seizures, emerge. One important takeaway from the above lists is that symptoms can emerge from use, abuse, overdose, or as a result of chronic use. In short, symptoms emerge with both short- and long-term ProSom abuse.

Behavioral Side Effects of ProSom Abuse 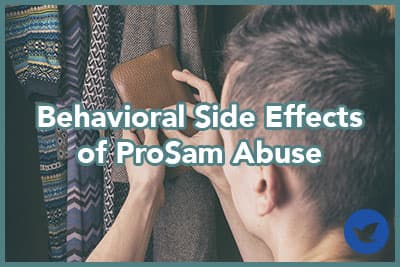 In the field of substance abuse treatment, it is well observed that the more individuals become psychologically addicted to a drug, the more their behavior will usually reflect their abuse. There is an explanation from a neurological standpoint. When a person abuses ProSom or another drug, the brain is flooded with feel-good neurotransmitters; in the case of benzos, the brain is flooded with GABA and its ensuing sedative effect. However, putting the brain into overdrive in this way has the effect of concentrating its efforts on maintaining this high. In turn, the person becomes preoccupied with servicing the drug abuse. Whereas a drug-free person can live to fulfill many purposes, drug addiction has the effect of a whittling a person’s daily life down to getting high or even staving off undesirable withdrawal symptoms. Against this backdrop, it’s clear that there are going to be many observable behavioral changes in a person once addiction sets in.

A Note on the Side Effects of ProSom Withdrawal

It is necessary to touch on withdrawal because there is general advisement that anyone who is going to stop, or significantly reduce, use of ProSom should undergo medical detox. Benzodiazepine withdrawal is associated with a host of potential dangerous symptoms. For this reason, the medical and addiction treatment community advises the public that a tapering process, during a doctor-supervised medical detox process, is most advisable. The tapering process can gradually ween a person off ProSom or any other benzodiazepine drug. This is a way of holding off the onset of severe withdrawal symptoms.

To provide insight into the withdrawal process without the safeguards of medical detox, consider the following potential physical and psychological withdrawal side effects:

To provide greater context to this discussion, it is helpful to point out that withdrawal is a natural biological process that occurs within the larger biological framework of a condition known as physical dependence. As the National Institute on Drug Abuse explains, when a person takes a drug with addiction potential, such as ProSom, the body will habituate to its presence over time. The two main hallmarks of physical dependence are tolerance and withdrawal. Due to habituating to the drug, the body will require more of it as time passes (i.e., tolerance) and then, if a person stops using the drug or significantly reduces the familiar dosage, the body will send out messages to resume the drug use in the form of withdrawal symptoms. It seems counterintuitive that the body is designed for survival but will send out cravings for a harmful drug, but this is a biological reality.

No one has to be alone in the process of finding a rehab center. Short of having a referral from a trusted source, such as a friend who has direct experience with a drug rehab center and can recommend it, the following professionals may be able to provide guidance and a referral:

Once a person identifies and then reaches out to a rehab center, staff members can provide extensive information. Typically, the rehab process starts with an extensive intake process, which is designed to assess the needs of the person seeking addiction treatment. The intake counselor, after having collected the necessary and relevant information, will work with a team of addiction specialists to make a treatment recommendation. Provided the rehab is accredited and professional, the team will invariably answer any and all questions and explain the process before admitting the person to treatment.

Transparency in the treatment process is a key component of highly qualified rehab centers. The transparency helps not only to make the recovering person and concerned family comfortable, but also provides education on drug abuse and addiction that can be instrumental to the recovery process.

As the National Institute on Drug Abuse discusses, there are numerous research-based treatments that can be effectively used to help a person recover from ProSom or other benzodiazepine abuse and addiction. At present, there is a general consensus that the most effective way to recover from drug addiction is to enter a structured rehab program that offers a full continuum of services.

It is understood that addiction is a complex disease. Although ProSom may seem to have a benign profile, as it is a sedative, addiction to it can be devastating. The layered services available at a rehab center can address the many dimensions and complexities involved in ProSom abuse. Services target the biological consequences of ProSom abuse during medical detox as well as its psychological and social underpinnings through therapy and supportive services, such as group recovery meetings. Although addiction can make a person feel out of control, rehab services can help to restore order and get a person back on track to living a balanced and fulfilling life.