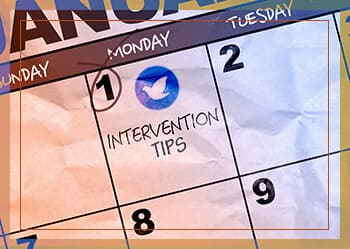 It’s rare for an intervention for an addicted person to go exactly as planned. These events tend to be highly emotional, and it can be easy to misplace focus, get off track, or lose control entirely. This can happen due to a lack of planning, too much anger and negative energy, or because the addicted person refuses to cooperate. This doesn’t mean that there’s no hope for change or recovery. Addiction is a complex issue and healing is a long process. However, there are things you can do to keep an intervention on track if it starts to go off the rails.

Unfortunately, a lot of things can go wrong during an intervention. It’s not easy to get a person into addiction treatment; in fact, less than 1 percent of those suffering from a substance use disorder in 2013 received treatment for the problem. The most difficult part of one of these events is the fact that the target individual isn’t expecting it and probably isn’t going to like it. The addicted person may not think there’s a problem or may simply not want to try to get better. Emotions can easily run high.

Some of the most common roadblocks encountered during an intervention include:

Sometimes, the only course of action during a derailed intervention is to call it a day and try again later. If the target of the intervention arrives intoxicated, for example, it may be best to call it off without the addicted individual finding out that it was even planned. If it’s already started and the person is too intoxicated or too angry to listen to anyone’s concerns, there’s little point in trying to force it. That being said, interventions often involve waiting for the person to become sober. In some instances, the intervention team may wait hours until this happens before commencing the conversation.

If an argument breaks out or someone goes off track when reading a letter, the intervention can be saved if another person steps in, tells everyone to take a breath, and then calmly reminds everyone why they are in the room. Always bring it back to supporting the addicted individual and finding solutions to a problem. If a loved one of the addicted person can’t calm down, it may be best to send that individual away.

It can be difficult for the friends and family of an addicted person to remain calm during an intervention, and to a certain point, it should be an emotional experience. It can therefore be very helpful to enlist the services of a professional interventionist – an expert on interventions who can moderate the event. As a neutral party, these professionals can more effectively bring interventions back into focus when they get off track. They are also typically trained in psychology, so they understand how to communicate effectively and calm things down when people get too emotional.

It’s important to keep in mind that an intervention might not work the first time, and also that it’s not a one-shot deal. An addicted person may not be ready to enter treatment during the first intervention, but the event could get the idea into the individual’s head, and the next time could end up going much better.