What Is There to Know about Adult ADHD? 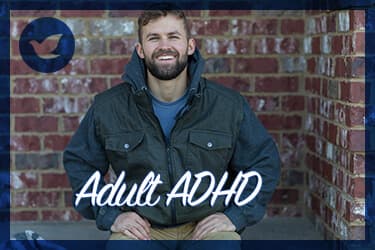 Attention deficit hyperactivity disorder (ADHD) is oftentimes only thought of as a condition that only affects children. When people hear “ADHD,” they often think of a child who can’t sit still or who acts impulsively. However, children aren’t the only ones who suffer from ADHD. It affects people during adulthood, and when left untreated, it can affect relationships with others and virtually every aspect of daily life.

What Is Adult ADHD?

Attention deficit hyperactivity disorder is a condition that causes a person to have difficulty paying attention or sitting still. It often leaves to impulsive actions. The person may have difficulty controlling behaviors that are typically not appropriate for someone in that age bracket.

ADHD classifies as a psychiatric disorder. Moreover, it’s considered to be a neurodevelopment issue. Adult ADHD affects both men and women at equal rates, even though more males tend to have ADHD as children than females. Generally, children are diagnosed with ADHD at the age of 7. Most pediatricians will not even consider a child to have ADHD before this age since the symptoms are oftentimes typical of younger children and don’t necessarily mean the child has a neurological condition.

Does a Person Develop ADHD in Adulthood?

The condition doesn’t develop when a person is an adult. It begins in childhood. Sometimes, the individual receives an ADHD diagnosis as a child. Other times, the person isn’t diagnosed with the disorder until adulthood; however, the condition was still present in childhood.

In some cases, a child is diagnosed with ADHD and outgrows it, but this only happens in about 40 percent of cases. The other 60 percent continue to have the disorder as adults.

How Common Is Adult ADHD?

Per the Anxiety and Depression Association of America, about 8 million adults, or 4 percent of the population, have ADHD. The statistic is consistent with the National Institute of Mental Health’s finding that 4.1 percent of adults have the disorder. Of this percentage of the population, 41.3 percent have a severe case of it, meaning that it greatly affects daily life.

What Are the Symptoms of ADHD in Adults?

Sometimes, a person suffers from ADHD for so long that they believe what they experience is normal. Oftentimes, an outside perspective, such as a friend or family member, is needed to shed light on the situation and prompt the individual to seek professional help.

Symptoms of adult ADHD include:

People who have ADHD may feel like life is chaotic on a regular basis. They have trouble keeping everything in its rightful place. Time management, keeping track of tasks, timeliness, and prioritizing in a logical manner are difficult for a person with adult ADHD.

The person may experience emotional ups and downs on a continual basis. Sometimes, the individual becomes bored easily and decides to search for excitement on a whim. Even small frustrations can seem unbearable. Mood swings and depression are common. 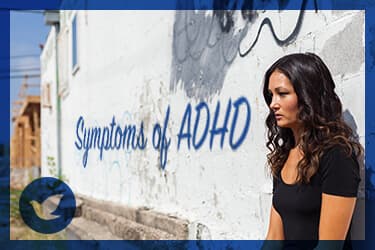 Everybody forgets things every now and then, but for people with ADHD, forgetfulness occurs on a regular basis. The person may forget where something is placed quite regularly, and forget important dates and menial information. They may forget how to do things they’ve previously done. In some instances, memory issues are serious, and they may cause the person to come across as unintelligent or careless.

Impulsiveness is a sign of ADHD, and this may manifest as continually interrupting others when they speak. Socially inappropriate behavior is another sign, as is rushing through tasks. People with ADHD often act on an impulse and don’t consider the consequences. Shopping habits can also be an indication of ADHD, as the person may purchase items that aren’t within budget when impulse shopping.

An adult with ADHD may have a lack of focus that goes beyond straightforward difficulty with paying attention. The person may become easily distracted and have a difficult time listening to another person speak. They may overlook details, and be able to complete tasks or projects due to an inability to maintain focus.

On the other hand, some people with adult ADHD experience hyperfocus, which is when a person focuses on one thing and is able to acknowledge anything else. This makes it easy for a person to lose track of time, which can lead to issues with relationships.

Many times, adults with ADHD are overly critical of themselves, which can lead to poor self-esteem. Problems at work or in relationships as a result of the disorder may make those with ADHD feel like failures.

Finally, those with adult ADHD may feel unmotivated despite an intense desire to do many things at once. Oftentimes, this results in more uncompleted tasks. When the person feels like everything needs to get done at once, it leads to restlessness when the person is unable to do everything. Anxiety comes into play when the person repeatedly thinks about worrisome events.

How Does Adult ADHD Differ from Childhood ADHD?

A person who has ADHD as an adult won’t fidget or move as much as a child with ADHD does. However, the risky behaviors that children with ADHD participate in often become more apparent as the person ages. For instance, a person with adult ADHD may drive fast, participate in unprotected or otherwise risky sex, or gamble. They may offend others by making hurtful comments, without thinking through the ramifications of doing so.

How Does Adult ADHD Affect Life?

Depending on the severity of the disorder, adult ADHD can affect virtually every aspect of a person’s life. Adults with ADHD may experience problems in relationships. They tend to talk over other people when they’re speaking, and they may not be able to focus on a conversation. They become easily bored in a relationship or feel as though the relationship is draining. Others may feel as though the person in uncaring, insensitive, or irresponsible. In addition, disorganization, time management, emotional disturbances, and forgetfulness take a toll on relationships with others. As a result, those with ADHD commonly have problems in relationships, such as frequent breakups and divorces.

The impulsivity, emotional issues, and lack of motivation associated with ADHD can lead to neglecting other health issues. Adults with ADHD may eat a poor diet or eat compulsively.

How Is It Treated?

Stimulants are some of the more common treatments for ADHD. These drugs may give those without ADHD energy, but for those who suffer from the condition, these medications help with focus. Some examples of stimulants used to treat ADHD include:

Nonstimulant drugs that help a person focus and combat the emotional symptoms of the condition include:

Therapy is also critical to help a person recognize the symptoms of the disorder and learn to cope with them. The person may be educated on ways to slow down thoughts and how to break down larger tasks into smaller tasks in order to complete a project. Therapy teaches the client how to prioritize and learn to manage time, and it may focus on ways to resolve relationship and communication issues.

In some cases, treatment for co-occurring disorders may be needed if adult ADHD co-occurs with a substance use or other mental health disorder. For instance, the person can potentially have an anxiety disorder or another mental illness in addition to ADHD. CHADD, the National Resource on ADHD, states that over two-thirds of people who have ADHD have another condition as well. Comprehensive treatment will include an initial assessment to determine if any other co-occurring disorders are present.