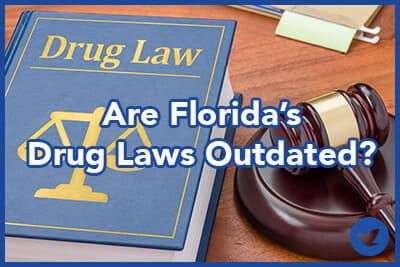 Sentencing for drug-related convictions in Florida has long been counted as some of the harshest in the country. Intense minimum mandatory sentences were put in place back in the 1980s as a means of fighting back against Pablo Escobar and the Medellin Cartel that were taking over Miami and flooding the state with cocaine.

Stiff sentences have remained in place since that time, ostensibly to serve as a warning and deterrent to those who might try to follow in the cartel’s footsteps. When pill mills were rampant across the state, they again served to severely punish those who were responsible for ruining and/or taking the lives of thousands of people, driving forward the opioid epidemic. For example, getting caught with 14-28 grams of hydrocodone means an automatic trafficking charge that carries a three-year minimum sentence. How many hydrocodone pills does it take to hit that amount? Just 22-44 pills.

These laws, however, have also served to imprison first-time offenders and those living with an active drug addiction for years on end, usually with little to no support to help them address the real problem of addiction that drove their choices.

With an influx of money coming into the state specifically to address the opioid addiction epidemic in Florida, many are concerned that the money will be diverted to the prison system rather than to helping individuals and families in crisis under the guise of “fighting the war on drugs.”

Efforts to Change the Law

However, State Senator Jeff Brandes suggests that the better choice would be to change the laws, not so those who are convicted of violent or drug trafficking crimes are set free or get lesser sentences but in such a way that judges would again have the power to make decisions on a case-by-case basis regarding what a prison sentence should look like. The goal is to help make sure that people whose only real “crime” is an untreated addiction and/or co-occurring mental health disorder get the help they need to heal and more quickly head home to work and care for themselves and their families – not rot away in prison cells with people who will only teach them how to be better criminals when they are finally released.

Senate Bill 694 would give judges the ability to waive mandatory minimum sentences without approval from the prosecutor as long as the individual was not engaged in long-term drug trafficking, did not use or threaten violence, and was not the cause of a serious injury or death of anyone at any time in the course of the crime for which they are charged. The bill was supported by the Criminal Justice Committee with a 5-1 vote. The hope is that over the next few months, it will be voted into law and people who need treatment will be able to connect with the care they so desperately need.

According to the 2016 Florida Department of Corrections Annual Report, there were more than 99,000 people locked up across the state. The number one reason for incarceration was burglary, accounting for more than 16,000 inmates. Manslaughter or murder was the cause of imprisonment for a little more than 14,700 inmates, but running close behind were drug offenses, with more than 14,600 inmates locked up for a drug-related charge or just under 15 percent of the prison population in the state. Additionally, about 22.5 percent of new inmates brought into the prison system in 2016 were there for drug-related charges – the number one reason for incarceration among new inmates.

The hope is that changing the mandatory minimum sentencing laws will have a positive impact on rates of crime, as those who are committing crimes due to an untreated addiction get treatment instead of prison. When those who are struggling are able to get help, continue to care for their families, and go back to work rather than leaving them to depend on the system for financial support, everyone has the opportunity to heal. Rather than tearing families apart and making a bad situation worse for all involved, Florida legislators have the opportunity to make a positive impact on the lives of thousands of families every year.

Are you covered for addiction treatment? Find your insurance.
and many more...
✕
Instantly Check Your Insurance Coverage
Your information is safe & secure
At Recovery First, we accept most types of private (non-government) insurance and offer a variety of payment options.
You can quickly and privately check your insurance benefits to see if you're covered for addiction treatment services. We’ll be able to tell you if your provider is in network with Recovery First Treatment Center and all American Addiction Centers locations.
This means your treatment may be FREE1 depending on your policy, copay, and deductible.
Your Next StepsWe're open across the US. Let's talk options.