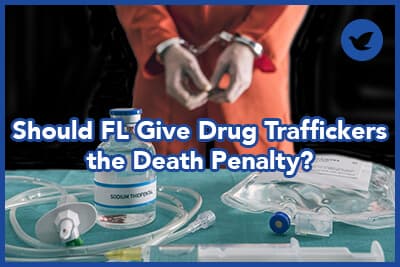 There is a complex and multifaceted group of debates that regularly cycle through state and federal legislatures, and late last month, Attorney General Jeff Sessions shared his thoughts on the matter in Tallahassee’s federal court house. To Sessions, the answer is the most severe response possible for those caught trafficking drugs: the death penalty.

Said Sessions: “These gangs murder people on whims sometimes, deliberately providing drugs that result in deaths. We will not hesitate to bring a death penalty when it’s appropriate.”

It is a directive that he has issued several times before and has often urged federal state prosecutors to follow suit, most recently in the form of memo reminding federal prosecutors to seek the death penalty in cases against large-scale drug traffickers.

What do you think? Is the death penalty an appropriate response for Florida when it comes to prosecuting drug traffickers?

A Fair and Just Response

The goal of the legal system in the United States is to mete out justice as is appropriate according to the law, and the law is determined and updated according to the will of the majority – or it should be. Nothing that is political is straightforward, and there are few things more political than the definition of a crime and its punishment.

When it comes to top-tier drug traffickers and those who are working hard to rise in the ranks of gangs and drug cartels, it is clear that there is little regard for human life. The goal is profit at all costs, and the end users who suffer from addiction and may overdose as a result of using the substance are of little concern to the traffickers. Likewise, the lives lost in the corrupt areas in which these drugs are mass produced and shipped out to the US and around the world matter little to drug manufacturers and traffickers.

When anyone intentionally makes a decision that ultimately triggers a death, even if that death was not the goal of that decision, the charge in the United States is usually involuntary manslaughter. For example, if someone gets behind the wheel of the car while under the influence and causes the death of someone else on the road, they are usually charged with involuntary manslaughter because they knew or should have known that their actions were putting other people at risk but they chose to engage in the behavior anyway.

For drug traffickers, even if they never pull the trigger – which many do – they are actively engaging in the sale of substances that they know can and do cause death. It is impossible to not see and know that what they do every day results in deaths both in the country where the drug is created and the country where it is used. There is a strong argument for the case that, even if they cannot be tied to a specific murder or overdose death, if they have worked in the service of the drug trade on behalf of a gang or drug cartel, then they have committed involuntary manslaughter at the very least.

When the death penalty (rather than life in prison) is put forth by prosecutors as the preferred resolution to a case, it is generally because (1) the offender is without remorse and will more than likely commit the same crime or worse if released, or (2) the crime is so heinous that there is no other penalty that is appropriate. It is almost never suggested as the appropriate response to involuntary manslaughter.

Is There Room for Reform?

There is a federal “kingpin statute” under which large-scale drug traffickers may be prosecuted and the death penalty sought, but this is only an option at the federal level, and it has never been used to seek the death penalty. Many are concerned that Sessions’s conviction that the death penalty should be sought in the state of Florida when dealing with drug dealers is tyrannical and will ultimately only add to the death toll while doing little to save the lives of the people in crisis. There is also concern that there is no room for people to reform, to go through treatment if needed, and to turn their lives around and positively impact the communities they once harmed.

What do you think? Is the death penalty the right choice for Florida when dealing with people convicted of drug trafficking?