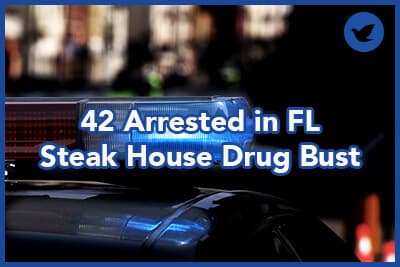 An employee of a steak restaurant in Florida was under surveillance for months before “Operation Big Mi-Steak” exploded earlier this month. In the sting operation, 42 people ended up in handcuffs when it became clear that the steak restaurant employee in question had been dealing opiates out of the store in St. Lucie County for months.

It was a process that took time to unfold. About two years ago, local officials saw a higher rate of overdose calls than they had before. As a result, law enforcement began to implement shifts in procedure in order to more effectively address the problem. In the past seven months, more than 12 search warrants were executed, and everything from guns, heroin, and fentanyl to cocaine, crack, crystal meth, and marijuana were seized over the course of seven months.

Ken Mascara of St. Lucie County Sheriff’s Office says: “When the heroin epidemic began to infiltrate our community back in mid-2016, we changed our strategy in responding to an overdose. We began sending narcotics detectives to each overdose, interviewing the victim and others that might have observed what happened.”

Working together with Homeland Security Investigations, the FBI, ATF, DEA, the 19th Circuit State Attorney’s Office, and the US Attorney’s Office, the St. Lucie County Sheriff’s Office focused their efforts not only on interdicting the drugs that were coming into the county and removing dealers and drug traffickers as part of that process but also on helping the individuals struggling with addiction who got caught up in the mess.

Said Mascara: “Several users did, in fact, admit to wanting help, freeing their lives from this horrible drug, and as a result were assisted with substance abuse rehab and other similar treatment resources.”

After these arrests began, rates of overdose across the county began to decline. The hope is that those numbers will continue steadily dropping over the coming months.

Said Mascara: “In the months of November and December 2016, we saw 19 overdoses in the unincorporated areas of St. Lucie County. Those same months in 2017 showed 11 overdoses. While that might seem like a small change, it’s monumental in the fact that lives are no longer being risked because of this dangerous drug being available on the street.”

For Every Life Saved

Every time someone avoids a deadly overdose, every time someone chooses to stay sober rather than relapse, every time someone avoids taking that first pill or trying that drug for the first time, everyone is better off. When a father or mother is able to get help, their children have a shot at growing up with their loved ones rather than going from foster home to foster home. When a teen or young adult is able to connect with treatment early on, they have the chance of living a life that is not torn apart by addiction and the chance to survive into adulthood. When an adult of any age connects with treatment, no matter how long they have lived in active addiction, they have the opportunity to be the success story they’ve always heard about, to do the things they formerly had only dreamed of, and to get a second chance at life.

And when one person makes an effort to improve their life, they positively impact everyone around them and can inspire untold numbers of people with their story, encouraging them to do the same.

Addiction Is a Medical Disorder

Because long-term use of any addictive substance can effectively alter the size, shape, and function of brain cells, it is important for people living with the problem to recognize that it is not a disorder they can simply overcome by wanting it bad enough. Willpower will not help you to overcome addiction and avoid overdose. Though dedication to the work of recovery is key, it is imperative to connect with the right medical and psychological interventions that are research-based and proven to be effective in helping people to get the symptoms of addiction, including cravings, under control. Rather than trying to go it alone, it is always recommended that people struggling with a substance use disorder connect with professional treatment services that can help them heal.