Tostitos is making a new “Breathalyzer” bag. Yes, a bag into which the purchaser may blow that can detect the presence of alcohol. Called a “party safe” bag, it is a group effort by Tostitos, Mothers Against Drunk Driving (MADD), and Uber to help people avoid driving while under the influence on Super Bowl Sunday. Should someone blow into the bag with no alcohol on their breath, the bag will flash green – good to go – but if they have been drinking, the bag will flash red and a $10 discount code for Uber will be displayed to encourage the person to get a safe ride home.

An interesting “community safe” technique and marketing tactic, there doesn’t seem to be a downside as long as it helps people who are under the influence to avoid driving. One Florida sheriff in Pasco County, however, feels that if you are considering blowing into a chip bag, then maybe that alone should indicate that you’ve had too much to drive safely. 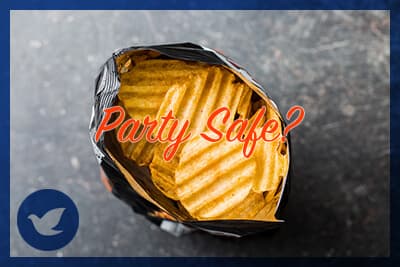 The official Twitter account for the county tweeted: “Just saying…if blowing into a Tostitos bag seems like a good idea, you should already know you shouldn’t be driving. Deal?”

In an effort to keep people off the road if they have been drinking, Uber will be giving away 25,000 $10 discounts via Frito-Lay bags up until the Super Bowl.

Driving after Drinking Is Always a Problem

Too often, people justify getting behind the wheel after drinking. They say, “I only had a couple,” or “I’m only going a few miles away.” Worse, many have done it in the past and convinced themselves that it is safe. Some even claim that they drive more safely when they are under the influence because they are more focused on paying attention to the road.

None of these justifications actually make it a safe choice to drive after drinking. The fact is that even if you feel you are paying apt attention to the road, your brain’s communication system is sluggish due to inebriation. That is, should something unexpected happen on the road, your brain will not process the information quickly enough to communicate to your body to slam on the brakes or swerve to avoid an accident. Even just a couple of drinks in the hours before driving can contribute to a lessened awareness and slower response time. The potentially fatal results of choosing to drive after drinking are well known. It is just not worth the risk.

Super Bowl Sunday is traditionally a heavy drinking day for Americans. For hours, the game plays, and people gather at sports bars and in each other’s homes and drink heavily as they watch. By the time the game is over, even if the person has been drinking slowly over the course of the game, they may not be in a position to drive safely. The Tostitos chip bag may be a good tool to help those who are not sure how to gauge their driving ability to determine whether or not they should call for a ride home, but then again, the Pasco County sheriff has a point: The very fact that you have been drinking enough to be concerned may be indicator enough that you should find an alternative way home.

The best thing you can do for your health and your body is to stay sober on Super Bowl Sunday. If you are in recovery, you have a number of tools available to help you do just that and still enjoy the game. Here’s how:

How will you stay sober on Super Bowl Sunday?