Does Drug Use Cause Delusion? The Evidence Says It Might

Everyone has heard the stories about people under the influence of PCP or bath salts – seemingly disengaged from reality, seeing things that weren’t there, and imagining that everyone they encountered was an agent of a vast conspiracy designed to harm them.

The fact is, however, that a wide range of drugs can cause psychosis, and with regular use, many substances can contribute to a continued state of dissociation characterized by varying perceptions of reality that can lead to unsafe or erratic behavior.

Earlier this month, one man in Fort Walton Beach, Florida, may have been experiencing acute psychosis or the effects of long-term use when he contacted police to report that someone had stolen his cocaine out of his car. According to reports from the Okaloosa County Sheriff’s Office, the man identified himself as a drug dealer and told them that someone had stolen $50 in cash and roughly one-quarter ounce of cocaine from his parked vehicle. 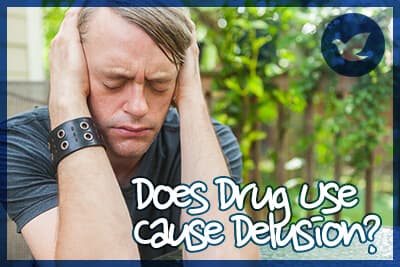 When police came to investigate, they found cocaine in the center console where the man said it had been stolen from, but there was no sign of the money. They also found a crack pipe inside the vehicle. The man resisted arrest without violence and was charged for that as well as for possession of cocaine and drug paraphernalia.

Believing the police to be allies in your attempts to defend your rights as a drug dealer, believing the cocaine to be stolen when it wasn’t, and an inability to understand why one might be arrested for such choices all indicate some level of disconnection from reality, whether due to being under the influence at the time or due to chronic use of crack and cocaine.

Is chronic drug use taking a toll on your loved one’s ability to function in reality?

As a result of the delusions, disorganized thinking, and hallucinations, people who are experiencing drug-induced psychosis may be aggressive or violent, so it is important that family members take care to manage episodes with caution.

It is not always easy to tell whether or not signs of psychosis are induced by drugs or by an underlying mental health condition. Very often, the two issues – a mental health disorder and drug use – are co-occurring factors. In most cases, however, people who are experiencing psychosis solely induced by mental health issues are nonviolent. When drug use enters the picture, however – especially the use of stimulant drugs, synthetic stimulants, and/or alcohol – episodes may be more likely to include aggressive behavior toward oneself or others.

The good news is that there are a number of treatments that can be helpful for people who struggle with psychosis. Acute cases will often fade when people stop use of their drug of choice, but chronic psychosis, especially when related to mental health issues, will take longer to tame. After initial stabilization, medication may play a role as well as therapies that provide new coping mechanisms, the ability to identify symptoms when they are small and manageable, and connection with resources that offer ongoing support and healing.

If someone you love is struggling with psychosis, no matter the cause, connecting them with treatment can help to avoid the risks and problems that can result. Is today the day you start learning more about options in recovery?