Does Drug Testing our Kids go too Far? 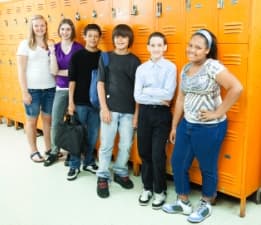 While much of the country is clamoring for relaxed drug laws, a quietly growing trend has been spreading; mandatory drug testing of children as young as 12 years old. It’s happening in our middle and high schools, and it’s happening in the homes of many American families. But with any new trend, as parents we must ask ourselves if this is the right thing to do; what are the consequences, and what are the benefits? As it turns out, there may be more of the former than the latter.

If drug testing isn’t happening in your community’s middle or high schools, just give it time. So far this practice has spread to school districts in 9 U.S. states (1), with many districts and counties holding regular meetings to discuss adding the practice to their school’s policies.

In some cases plans to drug test students are shot down because schools and parents simply can’t afford it, but in other cases it’s a matter of principle; many parents who trust their children feel that this is an affront against them and a violation of constitutional law. While they may be justified in feeling slighted, the judicial system has ruled that testing is indeed within the laws of the U.S. – primarily because only certain students can be tested.

Which Students are being tested for Drugs?

According to federal guidelines governing drug testing of minor students, not everyone in a school can be tested. Children who elect to participate in extracurricular activities and sports can be tested, as well as those that drive a car to school and those whose parents sign a form requesting that their children take part in the program. (2)

While some might argue that testing for sports is legitimate (in preparation for the way testing works in collegiate and professional sports and in an effort to identify kids who use performance-enhancing substances) (3) – the uncomfortable truth of the matter is that students engaged in any extracurricular activity can be tested for drugs.

This enraged the parents of two young girls in Milford, Pennsylvania who refused to submit to urine testing in order to join the school’s scrapbooking club. (1) Other children are being asked to provide urine samples to test for drugs when they join anything from the chess club to the math team to the cross country teams and more.

One of the major problems with this type of testing is that it doesn’t target the children who are most likely to use dangerous drugs. Think about it for a minute; are we really concerned that these scrapbooking girls are injecting heroin or snorting cocaine before they get out their safety scissors at school? Is it likely that the members of the chess club are getting wasted on vodka prior to playing a school tournament?

Probably not, and much of this is supported by the test results.

The Proof is in the Peeing – or is it?

As it turns out, very few students test positive for drugs. In fact, in the overwhelming majority of cases, positives tests are a rarity. In one Pennsylvania school only one test came back positive after 6 years of testing (1), while in a Chicago school less than 1% routinely come back positive (2), and a school in Alabama would only say that there were “very few” positive tests in their now-discontinued drug testing program. (4)

So why are so few students “peeing hot?” Is it because the threat of being tested for drugs causes kids to avoid getting high or drinking? Probably not.

Instead, the astonishingly low number of positive test results is likely a result of the fact that the wrong group of students is being tested. Meaning, the at-risk kids who are statistically most likely to use drugs often don’t get involved in sports; or any extracurricular activities, for that matter.

Of course, this doesn’t mean that the athletic jock of the school won’t get busted for occasional marijuana use – not every drug user fits a stereotype – and it’s possible that middle school and high school drug testing programs will keep the would-be casual user away from drugs and alcohol.

But ultimately, there simply aren’t enough positive tests showing up to indicate that drug testing our students is effective at doing much more than wasting resources.

Students who are required to submit to drug testing are often called out of class in the middle of the day, where they are required to drink water and wait for sometimes hours before their tests are administered. (2) Not only does this cause significant disruptions in classes throughout the day, many students also report feeling embarrassed and “singled out;” with some reporting that they feel their privacy is being invaded.

Other disruptions in normal school practices occur when parents take objection to drug testing both at the local school administrative level, and in some cases in a court of law. But there’s a few more problems that often prevent or shut down drug testing programs in our schools:

Despite these problems, it’s likely that more and more schools will begin testing their students for drugs, and in some cases these expensive measures will be funded by parents and/or taxpayers.

The argument used by many who oppose drug testing students is that this is a matter best handled at home.

Conveniently, an entire cottage industry has suddenly sprung up to target this probably-correct assumption, hawking home urine tests while only rarely touting the fact that the most logical time to test a ‘tween or teen is when there is suspicion of use, as opposed to arbitrary testing. Instead, the products are marketed as a deterrent; keeping kids in check with the ever-present threat of drug tests.

At-home drug test kits can be ordered and delivered discretely to your home, but this ease-of-use and inexpensiveness masks what could become a deadly problem.

For instance, consider the case of the Manlove family in Indiana. When their son was found to be drinking and smoking pot, the parents bought drug tests and began administering them at home. Not to be deterred, their son simply switched to using drugs that the home test kits wouldn’t pick up; prescription pills, LSD, and inhalants. It was the inhalants that killed David, causing him to have a heart attack at age 16. (5)

Obviously David was a fairly regular drug user, but parents wishing to catch their child who occasionally abuse drugs might think testing is a good idea for their kids as well. However, the fact of the matter is that most drugs rapidly break down and are expelled from the human body – some in just a few hours – making it difficult to catch an occasional user by any method other than lucky timing.

A Matter of Freedom – But whose?

Parents who support drug testing of kids often express the idea that random drug testing provides children with an easy excuse to turn down drugs or alcohol when offered; “No way, my parents test me,” or, “I can’t; I’m on the track team and we get tested for drugs.” In fact, one web company that sells at-home drug tests specifically for teens presents this concept as their primary sales pitch:

…testing is a very effective means of preventing teen drug use, especially by giving kids a great “excuse” to say, “NO WAY, MY PARENTS TEST ME.” (6)

But here’s something to consider; if your kid is using drugs, you probably already suspect it. Do you really need a random test to hopefully be administered to your child by his or his school teachers? How long are you willing to wait until that test happens? Wouldn’t it be better to take immediate action on your own, like most dutiful and observant parents would – even if it means a test at home to confirm what you already know?

And for those kids who are tested but have never tried drugs and don’t intend to, is the invasion of privacy worth it, considering the abysmally low number of positive test results that these programs produce? We are not a police nation, and one of our most significant cultural problems is that many parents seem to want everyone else to take part in parenting efforts. Should this include having our teachers – one of our most valuable public resources – use their time by scrutinizing and testing students for drugs?

What do you think?