On average every month, there have been about 45 overdoses in Boynton Beach. Already a high number, those rates skyrocketed in a three-day period this month when 25 people overdosed on opiate drugs.

Thanks to the use of naloxone, only two of the 25 lost their lives to drug overdose, but it’s still two too many. One of the two men was only 21 years old.

Jeffrey Katz is the chief of police in Boynton Beach. He said: “It’s absolutely tragic, I don’t know what else to say. It’s just absolutely tragic. It’s a greater intensity of a problem we’ve been seeing over the last couple of years just increasing. I don’t see it going away anytime soon.” 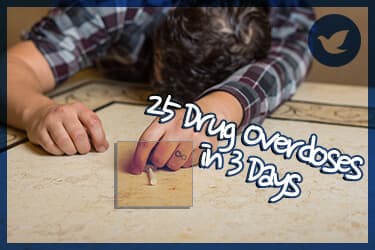 Someone once said that if the number of people who were dying due to opiate overdose were dying due to any disease other than addiction, there would be a huge outcry demanding research, investigation, immediate treatment, and round-the-clock updates on the numbers of lives impacted, lost, and saved through treatment. But because there is still a stigma about addiction and an underlying belief that people who struggle with the problem are simply not applying their willpower to the issue and therefore morally flawed in some way, it has taken a long time to get the public’s attention as well as the associated research and funding that will begin to stem the tide of overdoses across the country. Now that it is clear that people of all age groups, genders, races, cultures, and income levels are being scarred by opiate addiction, more and more people are making it clear to their government representatives that they want to see something done about the problem.

The good news is that now people are paying attention to what is happening. Senator Marco Rubio even took notice and tweeted about the devastating weekend in Boynton Beach: “Meeting with DEA director 2day because of stories like this from Boynton Beach 23 overdoses & 2 deaths over weekend.”

In the wake of the onslaught of overdoses, Boynton Beach law enforcement arrested 10 people on suspicion of selling heroin and continue to put their lives at risk of accidental overdose as they help people who are in the throes of medical emergency due to opiate use. The risk of accidental overdose is linked to exposure to fentanyl, a highly potent opioid used to lace heroin and other illicit street drugs to increase their effect.

Additionally, people are continuing to develop products with the goal of helping people avoid overdose. Some nonprofit organizations are pushing to increase distribution of fentanyl test strips to improve awareness of what people are using before they use it. The hope is that if people see that there is fentanyl in their heroin, they will either use it more slowly or choose not to use it at all.

One company has created a product that embeds a timer in the lid of a prescription pill bottle that can be used with any prescription. The idea is that if there is a countdown set to mark the amount of time between doses, people will be less likely to accidentally take their pills too early or just guess that it’s been “a while” since their last dose, and put themselves at risk of developing an addiction.

Are You Paying Attention?

If someone you love is struggling with an ongoing addiction disorder and regularly purchases drugs off the street, they are at risk of overdose. Fentanyl has not just been found in heroin samples but also in cocaine, counterfeit prescription pills, and synthetic drugs. No one is safe, and even those who are “seasoned” substance users are not able to gauge how much is enough to get high but not enough to trigger an overdose.

If street drug use or abuse of prescription drugs is an ongoing problem, and the individual is unable to stop on their own for any reason, immediate treatment is recommended. How will you take action and address the problem?